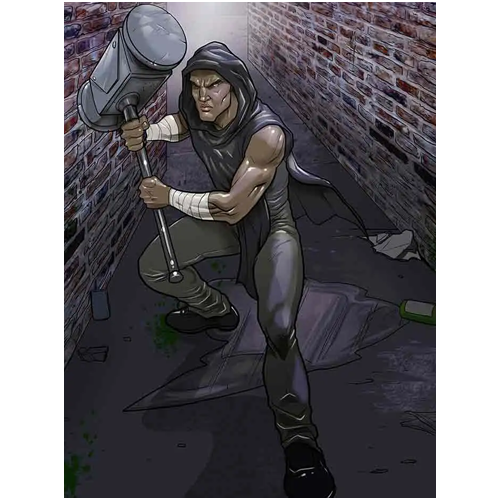 Larry Donovan was not a judge. He was not a defense lawyer or a district attorney or a bail bondsman either. He never even served on jury duty. In fact, he never stepped foot in a courtroom. So, when he decided to call himself “The Gavel,” it was inevitable that Liberty Star, Brass Eagle and the other members of The City Watch would tease him about it. All that teasing stopped, however, when Larry showed them his customized hammer. The powerful weapon was a very effective tool when it came to stomping out crime in several of the neighborhoods of Southern Platinum City.

The Gavel carries a giant customized sledge hammer. When using it, it increases his strength three-fold.

Larry was born in Arizona and though he was bigger and tougher than most of the other kids, he had to watch as several of his friends developed natural hyper-powers. As teenagers, many of them were recruited by various hero academies and some of them even became nationally known superheroes. Larry meanwhile went off to college where he majored in graphic design before eventually landing in Platinum City to work for a design firm. He wasn’t spiteful that his life turned out to be a little more ordinary, but he was eager to prove that even if he couldn’t battle supervillains from far away galaxies, he could at least contribute to the war on drugs and crime in his city. To that end, he went out at night and patrolled his neighborhood, often getting into scuffles with individuals he deemed unscrupulous or suspicious-looking.

Liberty Star and Brass Eagle eventually recruited him to join the City Watch and he was officially able to call himself a superhero. The Gavel became an effective and valued member of the team and that value was definitely seen during the Smash and Grab city-wide bank heist that took place on the 100th anniversary of the Great Quake of 2016. The Gavel quickly hit the streets and proceeded to bring some trouble to the troublemakers. While other members of the City Watch were seen chasing down bank robbers, The Gavel took a more direct approach – standing in the middle of the street and smashing dozens of speeding getaway cars with his giant hammer.

Amid all the chaos, The City Watch was called to help handle a hostage situation at a municipal court building. Gavel arrived on the scene and joined the others who were in the middle of a standoff with Stripes and Stars, a group of armed citizens led by Alan ‘Bud’ Winchester. They were holding more than 30 people hostage and demanding the release of Bud’s cousin who they felt had been wrongfully imprisoned. And to top it off, they were threatening to set off a particle bomb if anyone tried to take them down.

Well, The Gavel tried to take them down. As Liberty Star and Brass Eagle were negotiating the release of some of the hostages, The Gavel attacked. Bud, however was ready, and he hit the bomb’s trigger!

KABOOM! The device exploded and would have easily left at least a 3-mile-wide crater if not for Liberty Star. Her modified bow and arrow apparatus had been induced with particle technology that responded to a specialized device on her wrist. Luckily, the particles in the bomb also responded to her wrist device and she was able to defuse the explosion, reducing the impact to the equivalent of a powerful gust of wind.

Gavel was first to his feet. He grabbed his hammer and jumped into action, disarming Bud and his cohorts and allowing the officers to move in and apprehend the members of Stripes and Stars. The hostage crisis had been neutralized, but the day was far from over.

Gavel regrouped with the rest of the City Watch and they set out to catch more bank robbers.