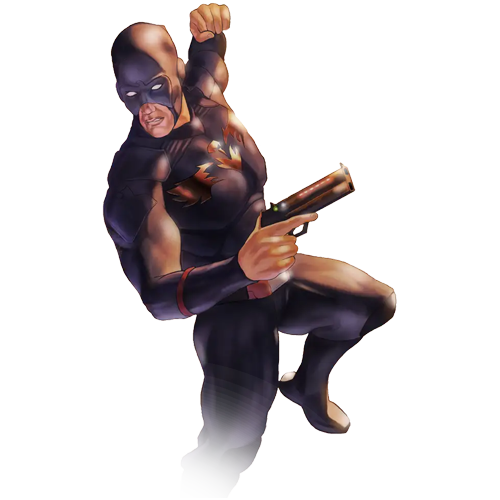 When Tommy Kraeger was young he was… well, he was a jerk. As a middle schooler he bullied his peers; as the star quarterback on the high school football team he made inappropriate jokes about anyone who wasn’t a part of his inner circle of friends; as a college student at Michigan State he was the king of pulling elaborate pranks on other students, as well as members of the faculty; as a sailor in the Navy he was always on the verge of getting booted for any number of offenses; and as a sales rep for an engine parts company he’d do everything short of sabotaging his co-workers to guarantee his commissions were the biggest at the end of each month. But at the end of the day, Tommy was just way too talented and charismatic to really find himself on the wrong end of discipline. He just had a way of getting away with stuff.

Tommy Kraeger served in the US Navy for several years before settling down in Platinum City and joining the City Watch Superhero Squad as Brass Eagle. He has above average human strength and speed and expert hand-to-hand fighting skills. He also carries a pair of customized Glock 17s and is a formidable marksman.

That is until he met Heather Dario at a banquet for current and former servicemen and servicewomen. Tommy was being his usual jerky self – making offensive jokes, saying inappropriate things to women, and having a little too much to drink – when the former and future Liberty Star politely asked him to tone it down. When he refused, she picked a fight with him, took him outside and politely beat some sense into him. A year later they were living in Platinum City as a married couple and Tommy was no longer able to get away with inappropriate stuff – at least not with her. And definitely not with the daughter they had a couple of years later.

He still had a few too many beers from time to time and he still made inappropriate jokes when hanging with his close friends, but he tried his best not to be an embarrassment. And honestly, he didn’t have much time to act a fool, for he soon joined Heather as a vigilante crime-fighter, taking on the name Brass Eagle.

Together, the two of them recruited a few trustworthy friends and they formed the City Watch hero squad. Primarily operating in the suburban sections of southern Platinum City, they did everything in their power to keep their neighborhoods free of crime, drug abuse and lewd behavior. They also offered their services as bodyguards for individuals of great means who felt it necessary to pay for a little extra security from time to time. Their reputation grew to the point that government officials in Platinum City hired them to assist their own secret service teams. This was the case when Mayor Gemini DeLisi hired the City Watch to be present during a speech he would give to commemorate the 100th Anniversary of the Great Quake of 2016, while calling for an end to the sociopolitical divide the country had increasingly experienced.

The date of the speech arrived. The squad took various positions around Platinum City Hall, and Brass Eagle was stationed just a few feet from the Mayor when chaos suddenly ensued. Every bank in Platinum City was being robbed simultaneously! Four members of DeLisi’s secret service team immediately shielded him, but were instantly taken down by a sniper! The Mayor would have been left totally exposed if not for Brass Eagle who jumped in to deflect a pair of what would have been fatal bullets. The hero scanned the area and quickly identified the perpetrator! He pulled out his own firearm and took aim. The sniper was forced to retreat. As soon as the mayor was secure, Brass Eagle gave chase. But when he ran out into the street the trail went cold, as the city was filled with cops and robbers chasing and shooting at one another. Brass Eagle was forced to help out against the hordes of petty thieves and he assisted in the apprehension of several baddies.

In the midst of the chaos, he received a call from Liberty Star. She needed the City Watch to help her handle a hostage situation. Brass Eagle and the other members of the team arrived and Liberty Star gave them the lowdown: three dozen hostages were being held in a municipal court building, but the perpetrators were not bank robbers. It was a half-dozen men and women calling themselves the “Stripes and Stars.” The leader, Allen “Bud” Winchester, had set up a very dangerous and very powerful particle bomb and threatened to set it off if the authorities did not release his cousin, who was being held on charges of setting fire to the offices of a mortgage firm that had unfairly seized his home.

Brass Eagle was prepared to charge in, but the police encouraged him and the others to negotiate with the Winchester group and figure out a peaceful solution, an idea that seemed unreasonable in the midst of the rash of bank robberies happening concurrently throughout the city. But alas, Brass Eagle and Liberty Star approached Winchester and discussed his demands. The heroes informed Bud that securing an immediate release for his cousin was probably not going to happen, but they had received word the case could possibly be reopened allowing a retrial to occur. Bud agreed that it was a suitable compromise. However he and the rest of Stripes and Stars would keep the building on lockdown and hold on to a small portion of the hostages, until a judge officially signed off on the retrial and set a definitive date in court.

Liberty Star relayed the message to the officers as Brass Eagle supervised the transfer of 25 of the hostages out of harm’s way. A third member of the City Watch named Gavel however, saw the hostage movement as an opening! He charged straight for the particle bomb, but the members of Stripes and Stars were ready… and they were not bluffing! Winchester immediately gave the order to detonate! Liberty Star and Brass Eagle sprang into action, but it was too late! Brass Eagle could only stand and watch as the particle bomb exploded.