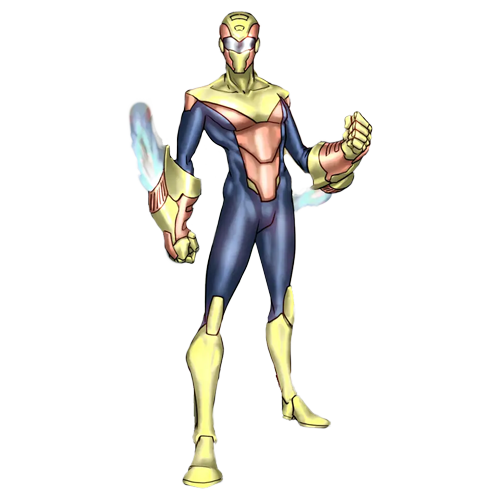 Jayson Kaminski’s children were famous. His two preteen daughters were catalogue models for children’s clothing lines and his 7-year-old son was a golf prodigy. It’s safe to say that if you ever visited Platinum City or any major City in the United States, you saw the Kaminski kids on billboards, on the sides of buses and in ad circulars for pretty much every store chain you can imagine. His oldest was the only one to venture into television ads, but Jayson and Stacey were not terribly keen on diving into that arena, for it would have required a move to Los Angeles or New York – and they were quite comfortable in Platinum City. In fact, they were more than comfortable, for when Jayson and Stacey became agents for their children, the 10 percent cut they paid themselves pretty much put them in the top tax bracket.

Colonel Justice is just an average guy with a pair of rocket-gaunlets and a super suit that gives him the ability to fly and move at high speeds through the air. His eye visor also enhances his vision in a variety of ways.

Jayson did continue to work as a freelance efficiency consultant for churches, but his true love was rocket-engineering! He didn’t go to school for it or anything like that. He just spent a lot of time playing with and building model rockets, which was something that he and his middle daughter often did together.

When his neighbors, Heather and Tommy Kraeger, also known as Liberty Star and Brass Eagle, respectively, discovered his love for rockets they recruited him to join their hero squad, the City Watch. Jayson was reluctant at first, as he’d not ever been the type of guy to pick a fight. In fact, he wasn’t very confrontational at all. He was the peacemaker and always looked to diffuse a situation. If he felt his views on a hot-button topic would result in an argument he’d opt to keep those views to himself. If a casting director was using aggressive negotiation tactics on his clients, he’d rather get up from the table and walk away before getting angry.

Jayson wasn’t exactly whom you’d call to bash some bad-guy heads. However, he did see some potential in this opportunity. He saw himself as someone who could balance out the hot-headed members of the team, like Brass Eagle and The Gavel. He also saw it as a chance to do something that would make him feel accomplished. He’d spent so much time seeing to the successes of his children, he’d kinda’ forgotten about himself. And finally, he saw it as an opportunity to test the limits and capabilities of all the rocket-tech he’d been playing with for the previous 15 years.

And so, Jayson became Colonel Justice! He created a highly durable, nearly impenetrable suit and built a pair of rocket-gauntlets that allowed him to fly and move at high speeds through the air. He customized his helmet-visor with a plethora of functions and capabilities and he developed a subsonic earpiece that gave him supersonic hearing. He purposely and deliberately did not equip his suit with any weapons – no firearms; no lasers; no blades, nothing intended to inflict damage – for he had come to believe even the worst individuals did not deserve to be smashed in the streets, but instead had the right to receive a day in court and a chance at redemption.

This made him the perfect candidate for a very particular assignment. On the 100th Anniversary of the Great Quake of 2016 that caused a massive chasm splitting the country in half (both physically and socio-politically), the mayor of Platinum City, Gemini DeLisi, was set to give a groundbreaking speech that would hopefully contribute to the goal of reuniting the United States. Well it was not to be, as chaos ensued in Platinum City with a rash of bank robberies organized by the supervillain Hysteria, and a hostage situation perpetrated by Stripes and Stars, an activist group led by Bud Winchester, who believed his cousin had been wrongfully imprisoned. Colonel Justice and the other members of The City Watch had been called in to help, but during the standoff Bud triggered a particle bomb.

Luckily Liberty Star was able to mute the explosion and minimize the fallout. Meanwhile, the other heroes took Bud and his cohorts into custody. However, the incident did leave some collateral damage – four casualties. Two men, and two women – one of which was a member of Stripes and Stars. Her name was Connie Lee. Connie had joined Bud’s group against the wishes of her father and brothers. And when they heard what had happened with the hostage situation and the particle bomb, the Lee family made a vow to take some revenge on Bud.

A few days after the incident, Bud was scheduled to be transferred from the local holding facility to Platinum City Correctional Facility, where he would stay until his day in court. The police had heard through several sources that the Lee Family would try to take Bud out enroute. And with so many officers still chasing bad guys from the Smash and Grab robberies, they were lacking the manpower needed to protect the prisoner during his ride through the streets of Platinum City.

They asked Colonel Justice to assist. He happily agreed and served as a special escort for the caravan. It wasn’t long before the Lee Family attacked! There were four of them – the father and his three sons – and somehow, they’d secured some pretty advanced, and frankly, out-of-this-world firearms. They hit the paddy wagon hard. But the Colonel was ready! Despite the various abilities the Lee family’s weapons granted them – grappling hooks, particle beams, energy blasters and more – Colonel Justice’s speed and flight capabilities proved too much for them to handle. He disarmed the Lee Clan without seriously hurting any of them, and subsequently secured the delivery of Bud to the Correctional Facility. Allen Winchester would have his day in court after all.

Thanks to Colonel Justice, justice would be served.