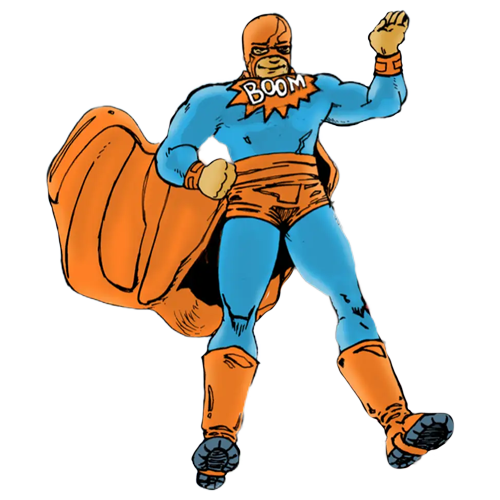 I had never met Willie Barton, but during my initial meeting with the telepathic teenager Cosmo Cortez and his MIT classmate, the telekinetic Jimmy Jist, I had learned much about him. You see, Cosmo and Jimmy had developed a project to turn an average, ordinary person into a respected superhero. And Willie was the most average and most ordinary individual on the planet.

Captain KaBoom actually has no natural hyper abilities; his “powers” are manifested through the telepathic abilities of Cosmo Cortez and the telekinetic abilities of Jimmy Jist. Those powers include enhanced strength, speed and durability; flight, telekinesis and limited psionic capabilities. Essentially, Captain KaBoom can have nearly any power Cosmo and Jimmy can imagine. The Captain does NOT know the true nature of his abilities and believes they are naturally his own.

Cosmo told me that Willie was born to a middle class family in the middle of America – Rock Island, Illinois – and grew up with one older brother and one younger sister, making him the middle child. In middle school he was a solid B student and in high school his graduation rank was 127 out of 254 students, putting him at the 50th percentile and landing him smack dab in the middle of his class. He attended Platinum State College, a solid institute of higher learning, and majored in accounting. And after a rather uneventful four years, he landed a job at a decent mid-sized accounting firm in Boston.

And it’s not that WIllie didn’t have greater, or should I say different, ambitions. In fact, Willie had, on many occasions, imagined himself a writer, or an actor, or even a comedian. But his family had often encouraged him to stick to a “safe” life plan. They had continually raised him to understand that some life paths contained entirely too much risk, and that he should concentrate on pursuing avenues of life that offered financial and social stability. His parents had even taken the time and effort, during his college search, to show him articles and studies about the college majors that yielded the highest possible chance to land work upon graduation. And so, Willie became the walking, talking embodiment of precautious living.

However, after 10 years of working for his middle-of-the-road, not-too-risky job, Willie lost that job. Although, he was playing it safe, the firm he worked for was not. The executives were gambling with the company’s assets and dabbling in insider trading schemes which is, of course, against the law. Willie’s firm was investigated by the government, and eventually shut down. The executives were sent to prison, and the employees lost everything – no severance packages, no 401K retirement funds, no pensions, no healthcare… no money. And furthermore, attempting to find a new job proved extremely difficult because no other accounting firms wanted to hire people who were associated with Baldini, Brade and Associates.

Willie had played it as safe as possible, and in the end, still ended up losing his job, desperate for work. Luckily, he had a little bit of savings he could live on for a couple of months while he searched for employment, but at some point that was going to run out as well. His parents had passed away, his sister was a prick, and his brother had a wife and seven kids of his own. Plus, Willie had also played it very safe in his social and romantic life, and thus, never connected with anyone who could possibly hurt him or conceivably break his heart. In other words, Willie was all alone.

Then one day, a thought suddenly popped into Willie’s head. The thought suggested to him that he should become a superhero. He, of course, tried to immediately put that out of his mind; after all, there is nothing even remotely safe about being a superhero, and furthermore, he didn’t have any powers whatsoever. But the thought kept coming back – in fact, his every waking moment for a week was filled with ideas of becoming a caped-crusading crimefighter. Little did he know that it was Cosmo Cortez who was giving him these thoughts. The college student was pumping a constant telepathic stream into Willie’s head and after a little while, the thoughts began to stick. Thoughts of him catching bad guys and battling supervillains; thoughts of him lifting heavy objects and moving at the speed of sound; even thoughts of himself flying.

Willie went up to his roof, took a deep breath and jumped; and that’s when Jimmy Jist used his telekinetic powers to catch him! That’s right, Jimmy telekinetically whisked the former accountant throughout the sky, all around New England. In the following days, Willie discovered more of his “hyper-abilities” as Cosmo and Jimmy continued to work their magic. Before long, Willie had created a costume, and eventually took on the name “Captain KaBoom.”

In the time since then, I’ve been keeping an eye on the adventures of Captain KaBoom, which have actually involved some legitimate crime fighting and hero work. And to this day, I am the only one other than Cosmo, Jimmy and the boys’ hyper-studies professor, Ratasha Robinson, who knows the true source behind KaBoom’s powers. Even Willie has absolutely no idea.

Willie also had no idea of what he was about to get into. As I had mentioned in my previous entry, I was in Tibet, tracking down the criminal mastermind Ramses Hondo, when CIA Headquarters was attacked by the hyper-villain known as Militia, who was attempting to free her partner, Attrition, from government custody. Cosmo, who was at the facility assisting in the interrogation of Attrition, was now telepathically communicating with me and giving me the blow-by-blow of the battle taking place.

Militia and Attrition were pretty much wreaking havoc, and the genetically enhanced super-soldier Lt. Rashard Bonds was doing his best to deal with them. But the odds were not in his favor. That all changed when Captain KaBoom burst onto the scene! The Captain used his incredible strength and speed to even the odds, as he and Lt. Bonds were proving to be quite the formidable tandem. Militia, however, had brought along with her an arsenal of high-tech hybrid weaponry. And now that Attrition had her trusty rapid-fire rocket launcher on her shoulder, things were about to get very interesting.

Captain KaBoom was able to block the first volley of missiles and Lt Rashard Bonds was preparing to take a new tactical approach. The fight, however, was far from over!