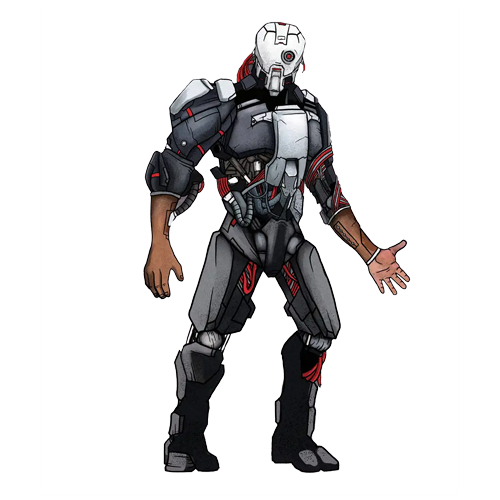 His name is Lexicon, and as he approached, I prepared myself for anything. His laugh was this twisted mix of maniacal and mechanical as it filtered through the strange armored mask he was wearing. In fact, his entire body was covered in cybernetic gear. Lord only knew what type of fiendish trickery he was going to try and ensnare me with. Cliché told me to relax though, informing me that Lexicon is the farthest thing from a fighter. She then grasped the hilt of her sword and said that’s what she was there for.

I scoffed at her suggestion she could come close to matching me in combat, and my reply did not sit well with her. The tension between us was growing thick. I never liked her from the moment she snatched Tectonica and I from Mt. Logan. Everything that happened since then has only exasperated my distaste for the book ninja, and I know the feeling is mutual. That moment, however, was not the time for us to indulge in our mutual contempt for one another. It was Lexicon’s turn to speak.

Lexicon’s mind is an advanced and mystical CPU that stores the entire contents of Sir Vellichor’s Grand Library. His cybernetic components also enhance his strength and durability.

He informed me that he is the sole librarian of Sir Vellichor‘s Grand Library. He told me that he knows every single book present, and every single word inside every single book as well. Both were facts I highly doubted. I replied it is impossible one person – hyper-being or otherwise – could maintain every book in the never-ending collection, let alone have them all memorized. Lexicon smiled and said it surely was possible since his head housed one of the most powerful CPUs in the galaxy. My face displayed my confusion, which Lexicon quickly helped eliminate. He explained that to help keep his collection in order, Sir Vellichor decided the Grand Library needed a librarian capable of serving his every entertainment desire at the snap of a finger. Therefore, he perused the galaxy’s space-time continuum and discovered phenomenal technological advancements in cybernetics, AI and computer hardware. He melded his discoveries together and Lexicon was the product.

Now, things were making more sense – he wasn’t wearing armor; his body WAS the armor! He was, indeed, a cyborg. But he wasn’t just any old robot. Sir Vellichor fed all of the energy existing in the Grand Library through Lexicon, allowing his incredibly powerful CPU brain to store all the information. There is nothing in the Grand Library he does not know inside and out.

I was captivated by the abilities of Lexicon, Sir Vellichor and the Grand Library in general. If I did not loathe them all, and that place, I would probably admire them greatly. However, they kidnapped innocent people and led many of them to their deaths. It was a fact that did not escape me in that moment, either. Thus, I told Lexicon though his story sounded intriguing, I did not care for what came next, unless it entailed me going home. He glanced at Cliché and coyly dipped his chin before turning back to me, and said that was exactly why he was there. He came to tell me how I could escape the Grand Library. I quickly asked what the catch was, to which he replied I would have to use my intellect, along with my brawn, to earn my release this time. Sir Vellichor had a bit of an elaborate scheme in place; one that could spell my doom or produce the greatest story of all time. Needless to say, I was far from amused.

Lexicon said he would accompany me throughout the Grand Library to provide minor assistance in solving Sir Vellichor’s riddle, which was using a set of clues to determine the one book I needed to enter in order to win my freedom. There were a number of logical outcomes, meaning I could possibly end up in a number of books that were the wrong answer. If I did so, I would be trapped in that book forever. If I chose the correct book, however, I would be confronted with the ultimate challenge, and if victorious, I would be deemed worthy of my release. I told Cliché and Lexicon what they and Sir Vellichor could do with their riddles and games. I refused to participate and demanded my release. Cliché reminded me, though, of what happened last time I forced their hand: Binder almost crushed Tectonica and I to death. I realized she was right. In this realm my powers were limited, while theirs were infinite. I really had no choice but to cooperate. So I did. The game was on…

Cliché teleported Lexicon and I to the “Historical Fiction” section. He then gave me my first clue: the Queen’s land is ascending. I angrily inquired what the hell he was talking about. Lexicon laughed and said that was the only hint, and the book I needed to find in order to get to the next step was in that area. I perused while contemplating the clue, and deduced “the Queen’s land” must be referring to the Queen of England, seeing how that is Sir Vellichor’s home country. I told Lexicon and he narrowed the selection of books in the section to titles with “London” in the title. I looked over the list Lexicon projected before me using a tablet device, and matched all the titles that had to do with victory, growing, or coming up in prestige. 15 minutes went by and nothing. I became extremely frustrated, but after a double take I found my selection. It was a book titled “London Rising”. Lexicon asked me if I was certain that book was the one. I confirmed it was and we were on to the next section of the Grand Library.

We landed in the Greek Thought and Literature area next. Lexicon then gave me my second clue: “synergy is a belief.” Again, I cursed him for his vague nonsense. Two books into the riddle and I’d already had enough. Nevertheless, I buckled down and began by making a list of synonyms to the word “synergy”. My list was comprised of many choices. So, I made Lexicon search the database for all the books in the section that contained my list of synonyms in the title. That did not help much at all. So, I focused on the second part of the riddle. Again, I came up with synonyms for the word “belief” and ran the list through the database again. This greatly narrowed the selection I had to choose from, but there were still hundreds of books left. I sighed and asked Lexicon to use a lifeline, referencing a popular TV game show called “Who Wants to Be a Millionaire” from over 100 years ago. He did not laugh. It appeared century-old pop culture is not an area of interest for Lexicon. That meant I went right back to my list of possible answers.

Looking it over carefully, an idea hit me: the Greeks were always discussing their beliefs on the universe and the heavens. This led to their literature and musings to be called “Greek mythology”. Mythology can be used as another word for a belief. So I had Lexicon update my results list. A few dozen or so choices remained. That was when I found the book titled “Armonia Mythos”, loosely translated to mean “the myth of harmony”. I chose it as my second book, to which Lexicon inquired if that was my official selection. I confirmed it was and we moved on to another section.

Solving the riddle was a seemingly endless process. I had to make selections, though. So, the next books I chose after receiving my clues were “Destabilization of Planetary Cores”, “Yin & Yang of Time”, ‘Platinum City Centennial”, “Abathar Muzania”, “Infinity”, “Galaxias Kyklos Force”, and “Earth’s Evolution”. It was no easy task to choose these by any means; my brain was ready to melt. However, just because I had my collection of books did not mean I was done. I had to narrow it down to one, and any of them could have been the right choice.

I tried to draw correlations between them and see if one was different than all the others, or if there may be a relation existing amongst them, with the exception of a singular book. I saw nothing along those lines, though. I exhausted all possibilities over the course of the next hour, and finally decided to throw caution to the wind and randomly select a book. I chose “Abathar Muzania”. When Lexicon inquired if that was my official selection, I hesitated. Something did not feel right. Then, it hit me. The answer was not in one book but all of them.

As I stared at the books piled in a single tower, all the titles were lined up perfectly in the same direction (thanks to my OCD nature). I realized that the answer was hidden inside all of the titles together. Seeing each first letter of each title in a column set my brain into scrabble mode. I mixed up the letters as if I were solving an anagram and after a few minutes, I came up with an answer. Next, I instructed Lexicon to search for it. The database returned exactly one match. The name of the book was “Lady Paige”.

I had him bring it forth, and while holding it he asked me for the last time if it was my official selection. I confirmed, and with that Lexicon nodded his head. He did not tell me if I was correct.

I queried whether or not I had chosen the right book. He replied by bringing up my disappointment in him not laughing at the 100 year old pop culture reference. I shook my head in disbelief at his wayward comment, and told him to focus on the matter at hand. He did not, though. Lexicon then said he perfectly understood my joke, and had been playing along the entire time. However, instead of simply asking me with each of my choices if I was certain I wanted to pick that particular book, he rephrased the popular catch phrase question of “Final answer?” from the old game show to “official selection?”.

He was testing me to see if I would ever catch on. I didn’t. I told him my mind stopped thinking about game show jokes after he didn’t laugh the first time around because I was too preoccupied with saving my life. The literary cyborg simply shook his head, then subtly made a signal with his hand. I turned to see another of Sir Vellichor’s cohorts appear out of the shadows. It was Binder!

But before I had a chance to process what was happening, he unleashed an explosion of energy and I suddenly found myself inside of the book “Lady Paige”.