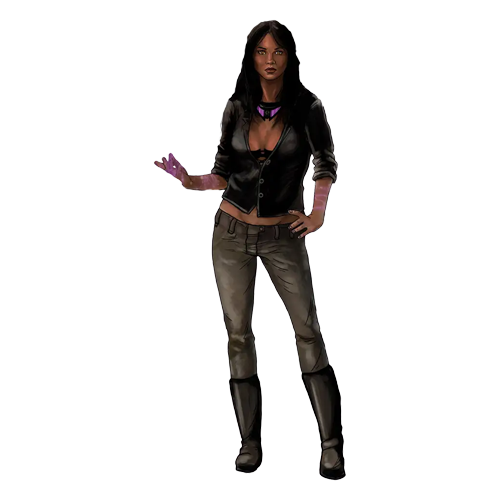 Everything was black. I was amidst a sea of darkness. Then, slowly, small specks of light began emerging. They grew brighter and larger with each second. Ultimately, I was surrounded by stars while floating in the universe. The celestial setting showed galaxies swirling all around me with cosmic dust and magnificent colors highlighting the horizons. I was amazed by the sight. I had been to space before, but this was different. It was serene. Untouched. I could tell no being had ever traveled through this space. I was the first, and it felt like home. The area made me feel as if all I would ever need was present. I closed my eyes and basked in the moment. Never before had I ever believed nothing was required of me but just to be, just to exist. It was a comforting, extremely satisfying state of being. I reveled in it. Until…

I sensed someone was near. Their eyes were upon me. When I opened mine, I saw Lady Paige. She looked magnificent. Before me was Sir Vellichor‘s greatest character. As we flew in place across from one another, I saw the universe flow through her. She was a part of it; its love child with destiny. I made inquiries of her. She did not answer, though. My attempts to discover where we were, what I was experiencing and why I was experiencing it were for naught. Her resolve to remain silent was firm. Thus, I ceased my questioning. A moment of silence passed as we both stared at the other.

Lady Paige is imbued with super strength, speed, agility and durability. She has the ability to fly and can project powerful energy blasts from her hands. She can also become invisible. Her powers are exponentially greater when she is in Sir Vellichor’s Grand Library.

I did not see her move. Lady Paige’s speed was blinding. By the time I realized I was hit, I was flying across space. Her strike ignited a pain inside of my body I never felt before. It resonated through every inch of my anatomy. I curled my body to cope with it, and then gathered myself. Lady Paige just floated there, refusing to hit me until I had my bearings again. Luckily for me, she was honorable.

I recovered and bolted towards her to retaliate. I punched and kicked, but nothing I did was effective. She dodged every strike with ease, ending her maneuvering with another crushing blow to my abdomen. Blood flew from my mouth and floated in the zero gravity space before my eyes. Still, Lady Paige calmly stared at me. I realized I was fighting her as if she were simply a hyper-being. But she wasn’t; in this realm, and especially in this book, she was a god. And I had to confront her as such. That meant there could be no holding back. I couldn’t place a cap on my abilities as I normally do. I had to unleash the full breadth of my powers.

I opened the deepest reserves of every skill and ability I possess, and then I attacked again. Lady Paige was still effective in her defense, yet, not as much as she once was. I forced her to retreat and reposition herself often. She would try to counter, but now I was moving faster and able to avoid them. We exchanged flurries of attacks, blocking and striking with the force of a meteor blasting into a planet. Explosions of energy crashed every time we came into contact with one another. The sound was deafening and the bursts of light were blinding. We both channeled our superior instincts and pressed forward, despite the temporary disorientation.

Lady Paige was relentless; as was I. We forged on with lethal intent, and as I continued to realize more of my abilities’ potential, I finally began to land strikes of my own. When I hit her with a punch to the jaw, her body began to fly back. Before the momentum carried her away from me, I grabbed her ankle, pulled her back in and leveled her with a clothesline, sending her spinning rapidly. This time I awaited for my adversary to gather herself, but when she did, I realized I probably shouldn’t have.

She began emanating a bright aura. Lady Paige was powering up. I flew in as fast as I could, breaking the sound barrier in the process. A thunderous boom rang through the air. I was met by a barrage of projectile energy blasts. I tried to fly between them but they pummeled me, one by one. Each blast rocked my body, sending ripples of pain throughout. It felt as if my organs were being shattered. Lady Paige did not wait for me to recoup this time. I was forced to evade her projectiles while recovering, which I barely did. Realizing I could not take another hit from her energy blasts, I knew I had to move faster than she could shoot. Therefore, as she recharged to fire again, I summoned every last ounce of power in me and darted towards her. Then, just as she was about to release another burst, I landed another strike.

The contact sent a shockwave through space. Lady Paige flew out of sight. I could not see her anymore, but I knew she would return soon. And after about 15 seconds, she did. However, I still did not see her. Then, one punch struck me in my face. Another followed directly after. A kick to my back was next. I was being battered by an invisible Lady Paige. I swung and attacked where I thought she was, but proceeded to strike nothing but air. More blows pounded into my body, crippling me. I knew I could not continue to attack where she was and had to strike where I believed she would be next. Thus, I focused all of my energy into reinforcing my body’s durability to sustain damage. I continued to get hit, and it hurt immensely, but I was able to focus on her movements and anticipate Lady Paige’s position. I unleashed all of my energy now through a kick which connected! She stopped in her tracks and became visible again. As she absorbed the blow, I followed it up with a furious combination of punches and more kicks. I leaned into every strike with all of my might, and they all landed, sending the universe into a spiral.

The force of which I hit Lady Paige with was destroying planets, exploding them into dust. Alas, she just floated there. I sensed she was amassing more energy, but this time it was to cause a cataclysmic event. I inundated her with endless attacks, pouring every last ounce of energy I had into them in desperation. It did not matter, though. Lady Paige continued to grow stronger and brighter. Finally, when I was about to black out from overly exerting myself, she exploded with light! Then everything went black…

I suddenly woke up in a panic on the floor of the Grand Library. My senses were all out of whack. My vision was blurry, I couldn’t hear anything, and my entire body was numb. I barely was able to hold myself up as I was on my hands and knees, wobbling like a newborn giraffe. I gasped for air, drawing in as much oxygen as possible. With each breath, my faculties returned a bit. I could see somewhat clearly, my hearing returned with semi-audible sounds, and my skin began tingling. After about a minute I returned to normal, and when I did, I saw the entire cast of The Book Club surrounding me with Sir Vellichor at the helm. He was standing before his throne, clapping his hands enthusiastically. Chuck Chapter had been at my side, licking me in an attempt to revive my consciousness.

I slowly stood to my feet and Sir Vellichor showered me with praise. Being too weak to do anything but stand, I simply stared at him. The Master of the Library raved about my performance being the most epic story he had ever witnessed in all the stories of the past, present and future. He said to watch gods do battle was the greatest entertainment anyone could imagine, and the fact Lady Paige was forced to self-destruct herself meant I had proven myself worthy.

At that point, all I wanted was to be taken from that wretched library, and I expressed this to them. Sir Vellichor slowly finished cheering, then came over to me and thanked me. He held a hand out for me to shake, but again I hadn’t the strength, nor the desire, to return the gesture. He, of course, did not seem offended or put off in the least, and instead, simply expressed that he was eagerly anticipating our next meeting. This comment, after everything he had put me through, angered me more than you can imagine. But alas, what could I do? I felt powerless against the Master and his wards. Or was I…

Suddenly I had an idea. But it would take a great deal of precision and quite a bit of subterfuge on my part. First, I made clear again my desire to leave the Library as soon as possible. And being a man of his word, Sir Vellichor bid me adieu and instructed Cliché to take me back to my world. But as she approached, I informed her that I needed to be returned to very specific coordinates in order to complete a mission I had neglected due to my time in the Library.

Sir Vellichor obliged, and as the light of Cliché’s teleportation vortex engulfed me, I suddenly and quickly grabbed Chuck Chapter. I heard the screams of Sir Vellichor as I disappeared with his most prized possession, and before I knew it, we were both in a containment unit at a secret CIA facility which was built to hold powered beings!

The cell utilized technology modeled after the powers of a government consultant named Vivian Valenzuela. She went by the codename “Ebb” and possessed the power to nullify any hyper-ability in her vicinity. This meant Cliché or any of the other Book Club goons (even Lady Paige, if she was still out there), could not get inside, without being trapped themselves.

Finally, I had a bargaining chip that would force Sir Vellichor to negotiate the end of his kidnapping and deadly games.