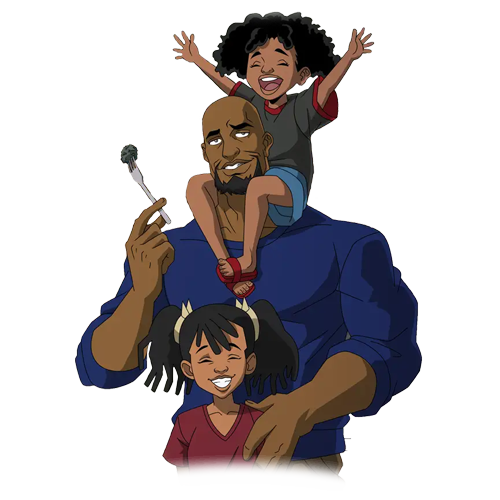 Jimmy Spears had grown accustomed to life as the husband of a superheroine. Crystal Spears had been a top sales exec at one of the biggest and most successful tech firms in the world, so being married to a powerful woman was not exactly a new thing. But now she was a half-woman-half-cyborg with super strength, enhanced speed, the ability to fly and the power to interface with computer networks with just a mere thought. Reporters and news outlets were calling her Cybernetica.

Jimmy has no hyper abilities, but often serves as technical and emotional support for the Sista Clique super hero squad.

And those same reporters and news people were gathered in a perpetual mob outside Jimmy and Crystal’s house in Northern California, trying to get the scoop on the extraordinary story that was Cybernetica’s war against her former employer, Universal Intelligence. To most of the people in the world, UI was simply a company that provided some amazing products to the public, like state-of-the-art cell phones and super advanced cameras. But to Cybernetica and her four friends, who had also gained hyper-abilities, UI was an evil organization that illegally extracted the powers and consciousnesses of hyper-beings to use them in the production of their super-cool technology.

Crystal discovered this, but before she got a chance to tell her husband about it, she had to catch a Friday evening flight to Las Vegas for a bachelorette party with her five homegirls, Alexis, Ja’Nique, Tiffany, Rivcah and Kharma. After drinking a bottle of champagne that had been accidentally laced with a hyper-serum, five of the six women bonded together to become a super team known as The Sista Clique. The sixth lady, Rivcah, had turned on them and become the super-villain known as Shanga.

That Monday, Jimmy got the call from his wife. She explained to him that she had spent the weekend battling hyper-villains and mad-scientists and that now, she and the other members of the Sista Clique would be on the road for a while as they set out to bring down UI and its evil owner, Edgar Lockhart, for good. Jimmy was willing to do whatever it took to support his wife.

Jimmy had been an NFL quarterback for a couple of years after college. But after surviving his first concussion, he had decided to retire early. His substantial rookie contract, some wise investments, and his wife’s incredible salary at Universal Intelligence had allowed Jimmy the opportunity to be a stay-at-home dad for the past 8 years. He and Crystal had two young daughters, Quintia and Quinverea (named to commemorate his Jersey number) and a large house to keep in check.

Mr. Spears was the man when it came to holding down the home front. He would often joke that his years as a quarterback had taught him everything he needed to know about running a household – keeping things in order, adapting to stressful situations and dealing with disgruntled teammates (or in this case, crying daughters). The house was always clean, the laundry was always done, the meals were always prepared (even if Jimmy had to order in, which he did quite frequently) and the kids were always taken care of. He also won his fantasy football league every year.

Things, however, changed with that phone call. For the next 6 months, Jimmy was pretty much a single dad who followed the adventures of his wife and the other members of the Sista Clique through news reports from places like PowerhouseNightly.com. He also had to deal with the constant bombardment of phone calls and reporters attempting to get comments from him. At any given time he could look out his window and see news vans parked in the street near the entrance to their long driveway. He had to hire a security team to patrol his home 24/7 and another security detail to escort him and his girls, whenever they needed to go out.

It frustrated Jimmy at times, but for the most part he rolled with it. Having tons of media attention, after all, was nothing new to the former star quarterback. He became used to the constant bombardment of visitors. However, he wasn’t quite ready for the group of visitors that came through the door one late Wednesday night.

It was his wife! But not just his wife – other members of the Sista Clique (Girl Six, Madam Deadhead and Ember Brook) were with her. But their leader, Kharma Lucky, was gone, having been kidnapped by the UI super villainess, Diabla. And the four remaining ladies were battered, bruised and bloodied. Several of Cybernetica’s components were severely damaged; Madam Deadhead, among other things, had a broken nose; Girl Six had a dislocated shoulder and Ember Brook was writhing in pain from an apparent internal injury. They had been battling an onslaught of super-villains, and despite all of their hyper-powers, the ability none of them possessed, except Cybernetica, was a healing factor.

Jimmy embraced his weakened wife, then went to work on trying to help them. The severity of their injuries and enhanced anatomies, however, were far beyond anything he could fix. Furthermore, the frustrations and pressures of what they’d been dealing with since they gained their hyper-abilities had reached a boiling point. Girl Six, whose bachelorette party had been the genesis for everything that’s happened couldn’t take it anymore. She hadn’t seen her fiance in nearly six months and was beginning to believe that their mission to bring down UI was growing more futile with each day. She grabbed a change of clothes, wrapped her arm in a makeshift sling, then headed for the door.

Jimmy caught up with her and tried to convince her to stay, but the former wrestler just didn’t want to hear it. After a little more discussion he had no choice but to let her go.

Jimmy looked around… his wife was damaged, two of her teammates were severely injured, another one of her teammates had seemingly quit, and the leader of the team had been captured and was in all likelihood being tortured by evil scientists at Universal Intelligence.

Just then he heard the sound of his 6 year-old daughter come down the steps. How in the world was he gonna explain all of this?