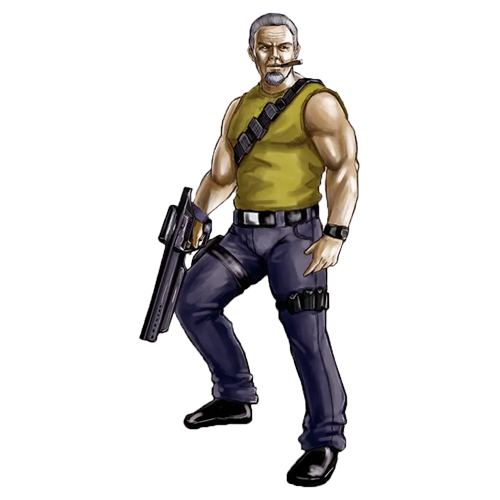 Ikaria, Greece is home to an incredible amount of octogenarians, nonagenarians and centenarians. Or just simply elderly folk. It is a Blue Zone, which refers to one of the five locations in the world where people live longer than usual. In fact, Ikaria has been called, by some, “The Island Where People Forget to Die.

”If only that moniker were true for the family and friends of Stavros Anatoli. He was born to a pair of wealthy parents who owned an export company that specialized in shipping wines, of which Ikaria was famous for. As a kid, he worked closely with his mother, father and sisters. And they also employed a large staff, but they too, were like family.

Annihilator has been imbued with a youth serum and possesses the strength and health of a young man despite his advanced age. He carries a specialized hyper-rifle that operates on a variety of cartridges and clips – inlcuding ice cartridges, flame cartridges, flare clips, energy beam cartridges and much more.

When Stavros was a teenager, he took an interest in cooking and began working toward becoming a chef. His parents fully supported him and by the time he was 25 he had successfully opened two upscale vegan-centric restaurants in his hometown.

He married a wonderful Greek gal named Konstantina, and they had four beautiful children who all grew up with a passion for fine wines and delectable dishes. They all eventually joined the family business. His oldest daughter was a master chef, while his two youngest children, a boy and a girl, each developed exceptional business acumen. His other daughter became a wedding planner. But of course, the Anatoli restaurants catered every major reception in Greece and even some in other countries around the world.

Everything was wonderful for Stavros and his family – until the goddesses of the afterlife decided to play a little game.

Sedah and Nevaeh were two powerful entities that ruled over an alternate realm called the 5th Oblivion. They spent much of their time toying with the lives of mortals by forcing them to participate in games, impossible challenges and gut-wrenching moral dilemmas. And in most cases, that mortal’s life was on the line. They had watched the seemingly perfect life of Stavros and his family for some time. Nevaeh loved his gentle soul, his loving demeanor and his devout faith, while Sedah despised his unwavering positivity. She claimed that his happiness was not inherent, but instead it was merely a result of him having such an easy and good life. In other words, she was willing to bet that if Stavros fell on hard times and all of the good things in his life were taken away, surely he would become spiteful, angry and perhaps even villainous.

Nevaeh was confident that his good heart was unshakable and so she accepted Sedah’s challenge. It was on the night of his oldest son’s wedding that the goddesses put their game into play. Sedah infected the mind of a hyper-human who called himself “Scamander.” He had the power to control and manipulate water and had used this ability in a number of petty crimes. He was now sitting in a prison hotbox. Sedah freed him from his cell and enhanced his powers. Then she convinced him to rob the wealthiest family on Ikaria, the Anatoli’s.

When Scamander arrived, the wedding reception was in full swing with hundreds of people all enjoying themselves immensely. This did not deter the possessed hyper-villain. He charged into the middle of the party and demanded money. Stavros’ security team immediately jumped into action and that’s when tragedy struck! Scamander raised his hands and suddenly a tidal wave CRASHED through the reception hall.

A few hours later, Stavros awoke. He was drenched and the hall was in total ruins. Worst of all, however, was that his family was gone. All of them. His wife, his parents, his son, his daughters, his new daughter-in-law, his staff, his friends… everyone had been washed away. Everyone had drowned. He was the only one who survived.

In the following months, Stavros attempted to reclaim any semblance of a normal life, but as you can imagine, everything was different. He tried to keep his positive attitude, but the thought of revenge constantly filled his mind. Finally, his resolve broke and he set out to find Scamander. Before he could confront the hyper-villain, however, he would have to figure out a way to deal with his powers. He spent nearly two decades futilely trying to obtain the means to take Scamander down.

The goddess Nevaeh knew she had lost the wager with Sedah, but she wasn’t going to just sit back and accept defeat. Instead, she decided to craft a specialized hyper-rifle and gift it to Stavros. She also infused his aging body with a youth-serum that allowed him to maintain the strength and health of a young athlete. The weapon had dozens of settings, a variety of energy beams and a plethora of destructive capabilities, and it was exactly what he needed to have a chance at destroying Scamander. He spent a couple of years mastering the weapon, then, when he was nearly 70 years old, he tracked the aqua-master to Honolulu, where he was attending something called a Blue Zone Convention. It was a huge gathering of senior citizens with hyper abilities from around the world.

By this time Scamander had retired from villainy and was living a normal life. Like most of the other seniors at the convention, he was there to just have a good time. But there was a small group of ornery ol’ hyper-humans with giant chips on their shoulders, and when RC Allen, Chaos Kao Kwan, Slasher Vinnatori and Diabla Diaz discovered Stavros and his plan, they offered to help him.

That night, the five Blue Zone Killers (as they would come to be known), confronted Scamander on one of Honolulu’s beaches. At first he pleaded for his life and asked for forgiveness. But when it was clear Anatoli had no intention to grant him any mercy, Scamander unleashed the full brunt of his abilities! With so much water nearby, he was incredibly powerful. The five senior citizen super villains, however, were just too much for him to handle.

Sedah and Nevaeh watched with glee as the Blue Zone Killers tortured Scamander. Then Stavros loaded his hyper-rifle with a “particle clip.” He took aim and blasted his nemesis with a particle bomb! Scamander, and any trace that he ever existed, was gone.

Stavros earned the nickname “Annihilator,” and officially joined the Blue Zone Killer squad. The five of them began gallivanting across the globe causing trouble and exacting revenge on people who had not done any of them wrong in the past. Soon, they were contacted and contracted by the dastardly businessman Edgar Lockhart who needed them in his battle against the super-lady super squad known as the Sista Clique.

The Clique and the Killers clashed several times, with many of their wars ending in stalemates. However, in their latest confrontation, the seniors had secured the upper hand, as Diabla managed to kidnap their leader, Kharma Lucky. Edgar was planning to harvest Kharma’s telepathic mind and use it in a number of illegal experiments.

The heroic hyper-cog was taken to Universal Intelligence World headquarters, a building owned by Edgar and currently protected by a force field. The four remaining members of the Clique, Cybernetica, Girl Six, Madam Deadhead and Ember Brook, attempted to go after her, but The Annihilator stepped up and unleashed a particle blast that blew the women back.

With their leader gone and the Blue Zone Killers in firm control of the situation, the Sista Clique was forced to retreat…