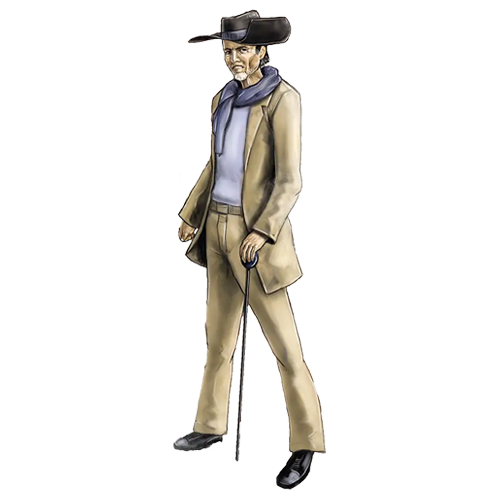 From a very young age Salvatore Vinnatori was a thrill-seeker. He was born in the beautiful town of Sardinia, Italy, but he spent much of his early life traveling the world, looking for the next adventure. Everything from mountain climbing to skydiving to bungee jumping – and that was just the typical stuff. He’d also seek out the craziest experiences – like the time he went volcano boarding in Nicaragua; or the 15 minutes he spent in Australia’s Cage of Death, in which he got submerged in water in a glass box and came face-to-face with giant saltwater crocodiles. Or what about the time he ran with the bulls in Spain? Or should I say “the multiple times” he ran with the bulls. In fact, the annual event held a special significance to Salvatore because it was one year during this mad dash of insanity that he met his wife, Sylvia, who was also born and raised in Italy.

Slasher has the metaphysical ability to “speak harm into existence,” which means his words can literally cut his target or, in extreme situations, kill.

A few years later they would get married directly prior to running with the bulls again, and then every year after they made it a tradition to travel to Spain and partake in the festivities. They were a thrill-seeking couple like no other, and fortunately, Salvatore had a job that afforded them the opportunity to have these adventures while getting paid. He was a travel ambassador for the city of Sardinia, which meant he would go from city to city promoting the beauty of his hometown and encouraging others to make it a choice destination during their trips to Europe.

He was paid well and his wife was able to accompany him. It was the perfect set up. Between stops they would go whitewater rafting in Michigan, take wingsuit flights in Switzerland, go ice swimming in Finland, and ride zip lines in South Africa. They were even some of the first people to play a round of golf on the Moon!

But of everything Salvatore and Sylvia loved to do, nothing was more exciting and heart-pounding for them then riding roller coasters. By the time the thrill-seeking couple was in their forties, some incredible advancements had been made in roller coaster technology and they’re goal was to ride every single one in the world, and eventually beyond (golf wasn’t the only thing happening on the Moon!).

Salvatore knew he and his wife were living a risky lifestyle, however, he could have never anticipated that a freak accident on the world’s fastest roller coaster would take his wife’s life. It was the Steel Behemoth at Platinum Point in Platinum City that suddenly malfunctioned while they were seated in the front car of the train. A bolt popped, ricocheted off of a beam and impaled Sylvia in the temple. She died instantly.

Salvatore would spend the next decade of his life in court battles with insurance firms and the managing company of Platinum Point, Lockhart Holdings LLC, which is owned by ruthless businessman, Edgar Lockhart. Eventually Salvatore ran out of money and had to abandon his lawsuits. Bitterness had grown in his heart and he was determined to get some sort of retribution. At the age of 63, however, he had no idea how that could ever happen.

Then, one fateful morning in his cottage back in Sardinia, Salvatore awoke and discovered he had developed a strange and powerful metaphysical hyper ability. He could “speak harm into existence.” In other words, if he wanted to cut you, all he’d have to say is, “Cut that person’s arm,” and suddenly you’d end up with a bloody gash somewhere on your arm. The louder he spoke it, the deeper the injury. It was a strange power, but Salvatore was determined to use it in his quest for revenge. And he was planning to go straight for the head – Edgar Lockhart himself.

Salvatore traveled to Platinum City and was eventually able to get close enough to Edgar, but when he uttered the words, “Cut Edgar in half,” nothing happened! He would come to find out that Edgar had used his own mind-reading abilities to discover the plot and subsequently tasked his bio-tech team to research a way to nullify the effects of Salvatore’s words. Mr. Lockhart’s bodyguards captured Salvatore, but instead of killing him, Edgar decided to offer him a job.

At this point, the old man had no money, no purpose and no prospects. He accepted the offer and became one of Edgar’s undercover operatives – because who would suspect and old man, ‘amirite?

Edgar would routinely send Salvatore (who was now using the codename “Slasher”) to the annual Blue Zone Convention, where senior citizens with hyper abilities would meet up and hang out. It was at one of these meetings that Salvatore met RC Allen, Chaos Kao Kwan and a couple of other cantankerous seniors – and they would come together to form a villain squad called The Blue Zone Killers.

Together, they would continue to do jobs in the interest of Edgar Lockhart, with their latest assignment being the kidnapping of the superheroine Kharma Lucky and the destruction of her team, The Sista Clique. RC and Chaos were the first of the Blue Zone Killers to engage the ladies and RC had used his teleportation powers to lead the heroes on a chase around the world. Now, they had landed in Sardinia, Italy, and Slasher was waiting.

The trio of senior citizen baddies engaged the Sista Clique in a brutal battle and Slasher used his dangerous words to tip the scales in his team’s favor. Kharma, as well as Girl Six and Madam Deadhead were being sliced and diced by Salvatore’s sharp rhetoric, but luckily Cybernetica and Ember Brook were much less vulnerable to his power, and the two of them were able to maneuver in close enough to nullify him, as the robo-chick was able to deliver a chop to the vocal chords, leaving the old man gagging.

RC and Chaos jumped in, allowing Slasher to flee, but Kharma lucky gave chase. She tracked him down a back alley and was inches away from apprehending him, when suddenly a bullet whizzed right by her head! Kharma turned to see a woman dressed in red tactical gear, aiming a pair of handguns at her. It was Rosalinda “Rosko” Kortellini – a member of Edgar Lockhart’s elite crew of assassins. She was back in her homeland on some personal business and had been contacted by her boss and told to assist the Blue Zone Killers against the Sista Clique.

With the injured Slasher nearby, Rosko went at Kharma with guns blazing! The heroine used her hyper-precognitive abilities to stay a couple of steps ahead of the bullets, but Rosko used her own precognitive hyper-power, the Kortellini Gift, to close the gap with each advance. The two women had a furiously intense exchange, but proved to be evenly matched. Rosko was impressed, and remarked to Kharma about how her telepathic mind would make a fine addition to her employer’s collection. But before the Italian assassin could strike again, the rest of the Sista Clique arrived. Rosko and Salvatore were cornered. Luckily for the villains, a vortex opened and RC Allen pulled them through, closing the portal behind them.