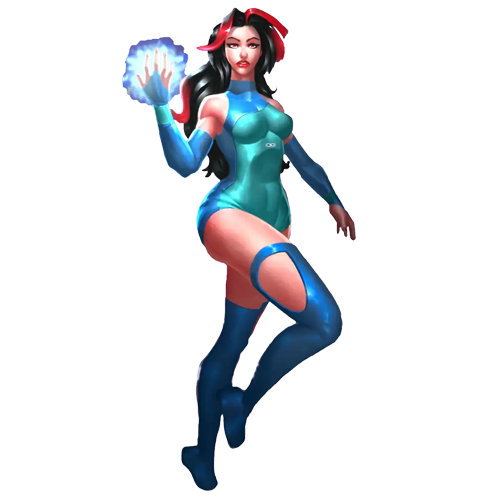 Virtuosa is the perfect example of how something glorious and beautiful can be born out of a terrible and tragic situation. A team of unscrupulous biogenetic engineers set out to create the perfect human being. It was not an uncommon thing to attempt this feat. In fact, dozens of teams of scientists over the past 100 years had tried to create the quintessential flawless individual. With the rise of hyper-beings and hyper abilities, the idea of an artificially engineered human master mold was the next step.

Virtuosa is a powerful hyper-mimic; she can learn any bit of knowledge instantaneously. She can also acquire nearly any hyper-ability she comes in contact with, and over the years she has permanently gained hyper strength, hyper speed, flight, energy projection, telepathy, telekinesis and several other abilities.

But all attempts had failed… that is until this team developed a new approach. They would eschew the methods of mixing DNA or brain tissue or blood samples; in fact, they would discard all physical methods, and instead use a metaphysical technique that had never been tried. In order to do this, however, they would need living, conscious minds. A few years of research showed that the minds of highly intelligent adolescent children would most likely yield the best results. And so, they hired a merc squad to kidnap 21 children throughout the world who had been identified as geniuses or virtuosos in specific talents or fields. The children were snatched from their families and brought to a secret facility, where they were imprisoned. The final victim was a 10-year old biochemistry savant from Platinum City named Kamiko Hashimoto, who would later come to be known as the super-villain, Deleria.

But that wouldn’t happen until many years later. At this point, Kamiko and the 20 other children were strapped to medical tables and then put through a procedure which enabled the engineers to extract their consciousnesses. They then took the 21 brilliant conscious minds and fused them together inside of a single living cell. The children were all left in catatonic states and eventually many of them were delivered back to their families, who of course were bewildered and horrified by the idea that their once insanely intelligent children were now totally mindless. It was tragic.

For the scientists, however, it was a time of great celebration. In a matter of weeks, that single cell had grown and morphed and transformed and developed into the perfect human being! Her name was “Virtuosa” and she was literally without flaw. Every system in her body operated at 100 percent capacity – her muscular system; her skeletal system; her immune system… everything was better than perfect.

But the greatest thing about Virtuosa was her mind. She could learn anything almost instantly! And not only that, but she could also mimic physical talents and abilities without a second thought. And furthermore, she could literally teach her body to copy hyper-abilities! Virtuosa was truly everything the mad-scientists dreamed she could be.

They reveled in her perfection. However, it was that very perfection that backfired on them, for Virtuosa was also morally perfect. That’s not to say she was incapable of doing anything that could be construed as wrong, but that her sensibilities toward the protection of the innocent, the promotion of nobility, the advancement of empathy and the annihilation of true evil, prevented her from allowing herself to be their puppet. Furthermore, once she learned the circumstances of her origin, Virtuosa lashed out against the team of scientists. They were able to escape her wrath, but she destroyed their secret facility.

She was finally out of their clutches, but she was not out of the woods yet, for she would soon realize that the voices of the 21 consciousnesses that were used to create her would ring in her head for the rest of her existence. Numerous times, she would travel to where some of the kids lived and try to help them. But even with all of the powers she possessed, she did not have the ability to restore their minds. She turned her focus to superhero work and hunting down the cabal of bio-engineers that had created her.

Her journey took an interesting turn, however, when she was tracked down by a group of super ladies known as the Sista Clique. The team’s resident half-woman-half-cyborg, Cybernetica, had formerly worked for a company called Universal Intelligence that specialized in, among other things, hyper-human-bioengineering. And now the people who ran that company, Edgar Lockhart and Reina Valencia, were attempting to kidnap Kharma Lucky, the telepathic leader of the crew. Universal Intelligence had also sent a plethora of hyper-human super villains at them and the battles had taken a great physical and mental toll. They needed to regroup, but they also needed answers.

During her last days at the company, Cybernetica had secured a USB drive with some secret files. One of those files was simply labeled “Virtuosa.” By this time, Virtuosa was a relatively well-known hero throughout the world, so the Sista Clique had no trouble finding her.

The woman who personified perfection told them all about her terribly tragic origin story and reaffirmed the idea that Universal Intelligence would probably use the same consciousness-extracting technique to take Kharma Lucky’s powerful hyper-cognitive mind. The files on the USB drive were incomplete so they asked Virtuosa what methods the scientists used.

She informed them that she had yet to figure out exactly how they did it. She did, however, tell them that one of the voices in her head periodically mentions something about “strands of red hair” – but she had no idea if that was significant or not.

Virtuosa and The Sista Clique spent all night working through the info on the USB until finally they found something that could lead to answers. It was a name… actually, it was the name of the lead scientist on the Virtuosa Project: Dr. DeMarco Scienza.