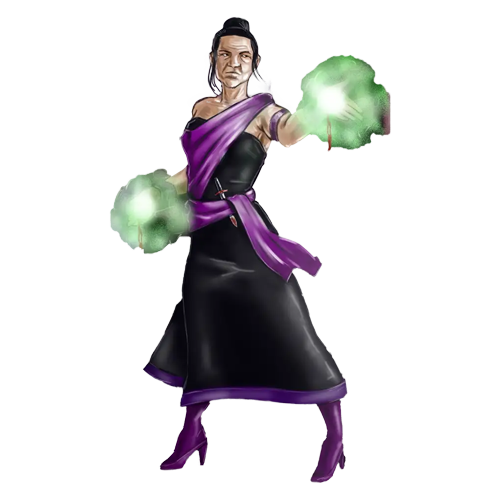 Kao Kwan is a member of the senior citizen super villain squad known as the Blue Zone Killers. You’re probably wondering what in the world we mean by “Blue Zone.” Well, contrary to what you may believe, it is not just a random combination of arbitrary words that sound cool together. The term actually has a great deal of significance. “Blue Zone is a concept used to identify a demographic and/or geographic area of the world where people live measurably longer lives.” (Wikipedia.org, son!). In other words, certain areas on the planet have inordinate amounts of healthy and thriving senior citizens. Five specific locations have been identified as Blue Zones: Sardina, Italy; Nicoya, Costa Rica; Icaria, Greece; Loma Linda, California (US) and the islands of Okinawa, Japan.

Chaos Kao Kwan’s blood is toxic and it allows her to blast poisonous liquids, fumes and energy from her finger tips.

Each member of the Blue Zone Killer squad is old, has hyper-abilities and hails from one of these areas. Kao Kwan was born in Naha – the capital of Okinawa – and was raised mostly by her father, for her mother, Nozomi, had left their home when she was 3 years old and would only drop in intermittently. Throughout her childhood, Kao could never understand the infrequency of her mother’s presence, and her father refused to disclose whatever he knew about what she was doing and where she was going. As she grew into womanhood, she often inquired about her maternal heritage, but was soon instructed to stop asking questions.

From the time she could walk, Kao worked in her father’s floral shop, and after he passed away, she took over. She was 21 years old when she became the sole proprietor and she would continue to run the shop for the next 33 years. After the death of her father, her mother’s visits became a lot less frequent, and when she did come, she was shrouded in black and usually said little to nothing. She expressed to Kao that she was simply checking in on the shop – and that was all.

Kao finally mounted the courage to follow her, which she did one particularly beautiful spring night. She tracked her mother to a small town on a nearby island and was startled to see that not only was she living a seemingly happy life with another man, but that she had hyper-abilities. The latter she did not discover until she barged into the small cottage and confronted the couple. Startled by the sudden intruder, Nozomi unleashed a blast of toxic liquids from her finger tips and poisoned her daughter.

Nozomi and her partner came over to finish her off, but stopped when they realized it was Kao. Instead of helping, however, Kao’s mother and her partner simply packed some of their belongings and left. Kao lay on the ground in agonizing pain for the next 12 hours… but she did not die. In fact, once the pain had finally subsided and she was able to get to her feet, she realized that she now had the same hyper-abilities as her mother.

She vowed to use her new power to hunt down the woman who gave birth to her, but she didn’t want answers or reconciliation anymore. Now, she simply wanted to destroy Nozomi. Over the next 30 years she searched and searched, but never found her. By the time she was 60 years old, she began to believe that her mother had passed away. Then, however, she learned about a secret meeting of super-powered senior citizens called the Blue Zone Convention. She traveled to Honolulu and, lo and behold, she found her mother. She initially tried to confront her, but was no match for Nozomi who obviously seemed to have a great deal of combat experience. Kao would need help. She found that help in the form of RC Allen and three other senior citizen hyper-beings who were very interested in taking out their lifetimes of frustrations on whomever they could.

The Blue Zone Killers super villain group was officially formed. And at the top of their bucket list was: “Hunt down and destroy Nozomi.” But until they could find her, they had become a hitsquad-for-hire. And their latest job was for the exuberantly evil businesswoman, Reina Valencia, who tasked them with the job of defending her corporation, Universal Intelligence, against a team of superheroes called the Sista Clique.

RC was the first of Blue Zone Killers to confront Kharma Lucky and her crew of hyper-human super ladies. They battled it out in the parking lot of Universal Intelligence in Northern California, but the Clique proved to be too powerful, so RC used his powers to transport them all to a particular flower shop in Okinawa where, Chaos Kao Kwan was waiting.

It was a trap, as the ladies were teleported inside of an airtight glass chamber. Chaos smiled at them and then began to fill the box with a toxic liquid. Madam Deadhead and Cybernetica, the strongest members of the Sista Clique, began working on the 12-inch thick glass, while Ember Brook used her hyper-pyrokinesis to incinerate the poisonous juice as it entered the chamber. But Chaos kept increasing the flow, making it more and more difficult for the women to avoid getting seared by splashes of the deadly liquid.

Then, just as it seemed the Sista Clique would be overcome by Kao’s killer concoction, Madam Deadhead finally busted the glass open and the ladies were able to escape and engage Kao and RC in battle. The brawl spilled out onto the streets of Naha, where the Sista quickly found out that two Blue Zone Killers were a lot tougher to deal with than one.

Chaos and RC were actually on the verge of defeating the heroic ladies once and for all, when suddenly an unlikely ally appeared.

It was a member of the legendary Iga Clan – the mysterious and deadly ninja assassin known only as Faceless.