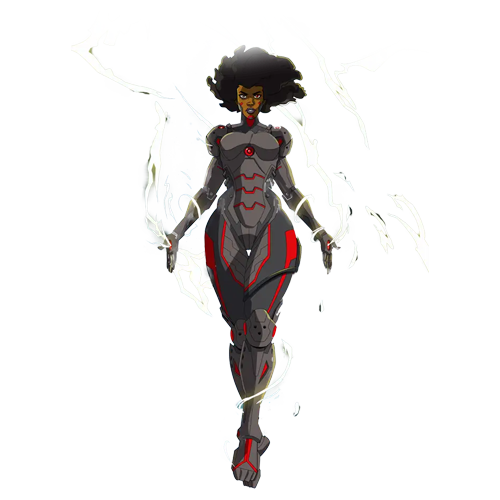 Crystal Spears was an executive account manager for Universal Intelligence, the leading manufacturer and distributor of Artificial Intelligence enhanced products; everything from next-generation cell phones to starship computers, UI has a hand in it. Crystal was the one they sent to land accounts that no one else could, and her success rate at securing major clients was second to none. In fact, she was so good at her job that she was tasked by her company to oversee the development and marketing of the next big thing – the “Smart Bud”.

Crystal can command her cybernetic components to enhance any part of her anatomy, including muscles, ligaments and even cells. These enhancements give her a multitude of abilities, including enhanced strength and speed, flight, limited regenerative healing powers and telekinesis. She can also interface with computers, especially with anything that possesses an artificial intelligence component.

The Smart Bud is a small device that, when placed in your ear, interfaces directly with your brain through “virtual tentacles.” It enables the user to make calls, access the internet and send messages with a mere thought. Truly a revolutionary product and Crystal had full and complete access to the developmental files and specs, because it was up to her to convince major companies like Apple, LG, Boeing and Mercedes to incorporate the Smart Bud tech into their products. She was also in possession of the only fully functional Smart Bud prototype currently in existence. She traveled all over the world, landing accounts left and right. Pretty much every time she entered a boardroom, she walked out with another 7 or 8-figure payday for Universal Intelligence.

And she did all of this while holding down an amazing family life. Her husband, Jimmy Spears, a former pro-athlete, who played four years in the NFL, was now a stay-at-home parent who took care of their two young daughters and held down their NoCal home with the kind of easy proficiency that would make Carol Brady jealous.

So yes, Crystal had it all! And that included a group of amazing friends from her days in college at Emory University. Thoug they were all spread around the country now, doing their respective jobs and raising their respective families, they all continued to stay in touch. While in school, the six of them were all part of the same sorority and they formed a step/dance team called the “Sista Clique.” They were known throughout the south as the absolutely best step crew you’ll ever see. College was an amazing time for Crystal and her friends.

So when she received an invitation to a wedding for her old step-teammate, Alexis Deville, she knew it would be an opportunity to get back together with her homegirls and party like it’s 2099! What she didn’t anticipate was that the bachelorette party was going to be in Las Vegas! Which meant it would be even more incredible than she had initially thought!

She was set to catch a plane for Vegas on a Friday evening – but first she had to take care of some business at the office. It wasn’t just any business, however – in fact, it was the kind of business that she didn’t want anyone else to know she was doing. Especially not her boss, Reina Valencia. Ms. Valencia just happened to be out of town, so it was actually the perfect time for Crystal to finally investigate what she believed were some suspicious business dealings by Universal Intelligence. Using her executive management clearance codes, and assisted by her Smart Bud earpiece, she gained access to a few secret computer files that confirmed her suspicions – that Universal Intelligence was not only experimenting on new technology, but they were indeed using the minds and consciousnesses of hyper human telepaths to enhance their “virtual-tech.” It wasn’t exactly an illegal practice, but it definitely teetered the line between cutting edge and inhuman.

She copied and downloaded the files onto an old-school USB drive (because that would go a long way toward making her investigative activities untraceable), then went home, packed her stuff, kissed her family goodbye and headed for the airport.

She landed in Vegas and met up with four of her homegirls – Alexis (the bachelorette), Tiffany, Ja’Nique and Rivcah – at the hottest spot on the Strip, The Carnival de’ Carnel Casino and Hotel! It was nearly impossible to get reservations at the Carnival, but the Sista Clique had a hook up: Kharma Halliday, AKA, Kharma Lucky, the hostess and lead dancer of the Carnival’s Celestial Creatures performance troupe. Kharma was also the girlfriend of the Casino’s CEO, Ray Carnel. So it was not a problem for them to get an amazing, luxurious suite as well as front row tickets to the mind-blowing Celestial Creatures show.

After performing, Kharma meets up with the others and the six of them set out to have a great time! Crystal however is a little distracted at first. For one thing, the information she has about her company is eating away at her. But that’s not the biggest distraction – the most bothersome thing is that her Smart Bud earpiece seems to be malfunctioning. For some reason, the earpiece is picking up the voice of a woman who keeps whispering the words “help me…”

Crystal, however, is determined to have fun with her friends and so she shakes off the distractions and they proceed to go crazy – playing casino games, dancing, laughing, joking, reminiscing, dining on the best gourmet dishes that Vegas has to offer and of course, drinking the finest of fine wines and champagnes. At about 4 AM they all crash from exhaustion and fall asleep in beds and on sofas all around their massive suite.

The next day, Crystal awakes to a startling realization – the Smart Bud earpiece she was wearing has begun to virtually and technically fuse with her mind AND the rest of her body! She screams in pain as several parts of her anatomy are transforming into cybernetic components. She cries for help, but none of her five friends come to her aid. So she pulls herself out of the bed and crawls – in agony – to the common area of the suite, where she finds that her five friends are also mutating, morphing and writhing in agony…

They would later learn that one of the champagne bottles was laced with a hyper-serum. However, before Crystal could fully process what was happening, Reina Valencia, Ray Carnel and Ray’s right-hand man, Simon Charles arrive with a squad of hotel security officers. The officers pull out specialized rifles and hit each of the six women with tranqulizers. They all go down – except for Crystal, who seems immune to the sedative. So, without a moment of hesitation one of the security goons pulls out a shock-stick and hits her with about a thousand volts of electricty.

Crystal falls to the floor, unconcious…