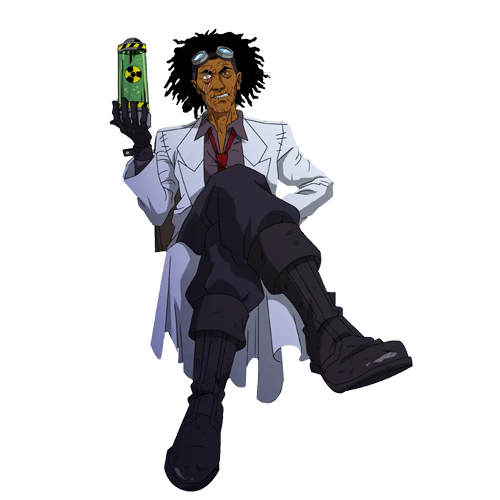 While most of the guys growing up in the slums of Greensboro, North Carolina ended up in prison for things like drugs, gangbanging, robbery and murder, Victor Carnel would end up getting locked up for being a genius. A biomolecular genius, to be exact. Vic and his brother Ray, (but mostly Vic) began developing hyper-serums when they were teenagers, and eventually the illegal development and distribution of these potions would get Vic into lots of trouble.But it really was all good at first. Vic used the money he earned from playing in fixed dice games to buy certain typical household chemicals, over-the-counter medications, illegal street narcotics and more, then used some chemistry equipment he heisted from the local high school (that he never attended) and a plethora of knowledge he gained from the internet to begin mixing serums that he and his brother would then sell to people who were looking to enhance their own abilities. At the time, there were hundreds of would-be mad scientists attempting to create serums for profit, but by and large those other scientists were pumping out weak and sometimes utterly ineffectual products. These two kids in NC, however, were creating some pure and potent stuff. And everyone wanted to buy from them.

Victor Carnel is a biomolecular genius. He has also gained a limited capacity for manipulating rock and earth.

But while Vic’s intelligence was definitely the driving force behind their success, some luck did play into it as well. It just so happened that a few nights after the Carnel brothers began experimenting with hyper-serums, Vic found the carcass of a dead animal behind a dumpster near their apartment complex. Now, finding dead animals was not uncommon in the ‘hood. But finding dead animals that look like mini-dragons was unheard of. And not only that, but the recently deceased’s blood was blue and it was glowing. Vic took it back to the little makeshift lab they had set up in their bedroom (their alcoholic parents never checked on them) and began to take samples. His brother was already asleep for the night, so Vic had the creature all to himself. He found that the blood had a plethora of extraordinary properties and different effects could be triggered from mixing it with different chemicals. But his most important discovery was how it became the key ingredient in the hyper-serums he would become famous (and infamous) for.

Vic drained the carcass and collected about 2 dozen vials of the glowing blood. Then he disposed of the body before his brother ever found out about it. That’s right, he kept the kaiju blood a secret, discretely mixing bits of it into the serums, while Ray was focusing more on the business side of things. And that business was good. By the time they were in their mid 20s, Vic and Ray had made millions.

Then one night Ray asked Vic to handle a sale for him. Vic begrudgingly agreed to go, but once he got to the location of the exchange, he found that the buyer was an undercover police officer. And once the officer found out that Vic was not just selling a little bit of marijuana, the FBI was brought in and Vic was hit with federal charges. They levied millions of dollars of fines against him for unsanctioned experimentation and illegal distribution, and informed him that if he paid the fines, he would be able to walk free with just a warning.

Vic waited for his brother, Ray. Then he waited some more. And he waited a little longer…

Finally, the authorities could wait no more. Vic Carnel was tried, convicted and sentenced to 10 years in prison. He was absolutely miserable, as he soon learned that he suffered from claustrophobia – a fear of enclosed spaces. He would do anything to get out of his cell and that included some of the tough jobs and assignments that other inmates would never volunteer for. One of these jobs included an excursion into the Colorado Rockies. Some dangerous mining had to be done, and in lieu of risking the lives of law-abiding citizens, the government paid the prisons for the use of prisoners to do the job.

Vic and 20 other prisoners were lowered into a cave, but within minutes the structural integrity of the rocks faltered and they were buried. All but Vic and two others, Jerry D’Angelo and Carter Wiley, perished immediately. The survivors would have to wait and wonder if anyone would ever come for them. After a few days, the men decided that they’d have to try and find a way out. During their exploration, however, Vic stumbled upon something that was very familiar to him – a pile of massive kaiju carcasses. He wondered where they came from and who could possibly be storing them here. But that only lasted a moment, as his only concern now was getting out of the cave.

He cut open one of the carcasses, revealing the glowing blood. Vic knew he could use the substance to give them hyper abilities, and those hyper abilities could help them escape, but they couldn’t just drink it – that would kill them. Vic, being the genius he was, figured out a way to inject a diluted mix into their bloodstreams – and it worked. Vic gained the limited ability to bend and manipulate the rock face, while Jerry gained enhanced strength and Carter gained extra-sensory abilities.

It took two days, but they were eventually able to dig themselves out. But they were definitely not free, as the authorities were waiting for them and took them back into custody. Upon returning to the prison, Vic, Jerry and Carter were tested and experimented on. Jerry would eventually die from the experiments, but the others survived. Vic, however, developed quite a few physical deformities.

After his ten years were up, Vic was released from prison. Without wasting any time, he first returned to his neighborhood in Greensboro. His parents, and the apartment complex he grew up in were gone. However, the sinkhole he’d stashed his kaiju blood vials in was still intact – and so was his stash. He then traveled to Colorado and found that the kaiju carcasses were still there, and in fact, the underground graveyard had expanded. There were nearly twice as many now. But like before, this was not the time to investigate the plethora of questions running through his head. This was the time to track down his brother Ray, and initiate a family reunion.

Vic arrived in Vegas, where his brother had used the money they made when they were teenagers to build an extravagant casino. He checked into the hotel and began monitoring his brother. He watched as Ray ran his establishment and glad-handed highrollers. He observed as Ray had dinner with his girlfriend, Kharma, and interacted with his security officer, Simon Charles. He monitored Ray as he nervously awaited the arrival of Reina Valencia and Edgar Lockhart, two ruthless business sharks who had invested a great deal of time and money into Ray and his casino. And Vic listened as Ray explained to Reina and Edgar that he and his team of scientists had struggled to reproduce a viable hyper-serum for them to use.

The business sharks gave Ray a 24-hour ultimatum before leaving to enjoy the pleasures of the Carnival de’ Carnel Casino and Hotel. That’s when Vic finally approached his brother. Ray was stunned and afraid at first, but Vic assured him that he was only there to assist. The recent and now disfigured parolee promised the dapper casino owner that he could help him deliver the hyper-serum to his associates with no problem.

It was like old times – they worked together in the lab all night, and in the morning, Ray met with Reina and Edgar. They brought in four test subjects to try the new hyper-serum. But after injecting the men – just like before – they all experienced a brief enhancement in abilities before writhing in pain and falling to the ground.

Ray could almost hear Vic in his hotel room laughing. But there wasn’t much time to celebrate his revenge, for Ray had sent a contingent of goons to apprehend his brother. Vic could hear them coming down the hallway; he knew he was about to be taken, but he would not allow them to take the real serum. Thinking fast he poured the vial of kaiju-laced hyper-potion into a full bottle of champagne, then resealed it. Ray’s goons busted down the door and attacked. They easily subdued the ex-con and carried him off to face Ray and his business associates.

They beat him up and Edgar attempted to use his mind-reading abilities to extract information from him, but for some reason, Mr. Lockhart could not decipher the insanely complex brainwaves of the mad-scientist. Vic laughed and promised them they would never get their hands on the real hyper-serum.

They took him down to the lab and strapped him to a table next to Ramona, the telepathic being whose hyper abilities were being used to run the A.I. functionality of the casino. The two of them made eye-contact for a brief moment. And then the agony began as Ray’s scientific team proceeded to torture Vic…