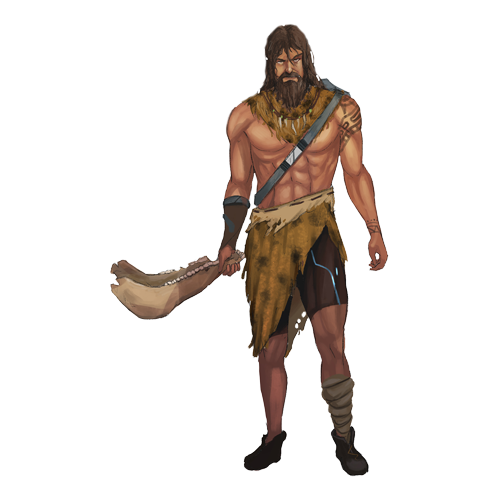 Jawbone is a member of a hero squad known as the Sacred Asylum. This is a group of extraordinarily powerful hyper-beings who all believe they are the future versions of historically biblical figures. In the 22nd century, the man who would eventually come to be known as Jawbone was born in the upper peninsula of Michigan, with the name Caruso Brinaga; but by the time he was 24 years old, he was convinced in his mind that he was indeed the Old Testament Judge of Israel, Samson.

Jawbone’s hyper strength is directly proportional to the length of his hair. He also possesses increased durability. His primary weapon is the jawbone of a giant donkey.

And there was not much that flew in the face of this seemingly unhinged claim; his hyper-strength was absolutely off the charts, and the longer his hair grew, the more powerful he became. In fact, he had to actually keep his hair from getting too long, for his strength could become uncontrollable, and thus impede his ability to do simple tasks, such as picking up a cup, or shakeing a hand without completely crushing them.

But nothing further cemented the idea in his mind than when he was visited by a very powerful man simply known as Messiah. Messiah had been watching Jawbone as he gallivanted around the world, displaying a multitude of heroic acts: defeating super-villains, stopping the dastardly schemes of master criminals, and defending those who could not defend themselves. Messiah asked Jawbone to join his team of individuals who, like him, believed they were future versions of ancient figures from biblical text. He immediately agreed, and was taken to the Sacred Asylum facility where he met Devorah Chance, Exodus Red, and Regalia Thyatira.

After taking some weeks to become acclimated to his new teammates, Jawbone was informed that several dangerous hyper-villains, who were all also future versions of biblical figures, had begun to appear on the planet and were making a concerted effort to seemingly mine energy from the Earth’s core on behalf of a mysterious Dark Master. While Messiah mostly stayed secluded in the North Wing of the Sacred Asylum facility, meditating and using his vast powers to help keep the universe in balance, Jawbone, Devorah, Exodus Red and Regalia traveled the planet, hunting down and battling these biblical villains.

They engaged in numerous battles and encountered several dangerous beings as they sought to keep the core safe. None, however, gave Jawbone as much personal grief as a femme fatale known as the Silver Temptress, who, of course, was a future hyper-version of the Old Testament’s Delilah. Despite the fact that she was indeed working on behalf of the Dark Master, she also made it her personal goal to specifically torment, and eventually destroy Jawbone.

She initially attempted to bring about his demise by luring him into a romantic relationship, and for some time the two of them were quite a passionate couple. Eventually her true intentions were discovered, and a massive battle took place at the Sacred Asylum facility as the heroes attempted to oust her once and for all. The mansion was severely damaged in the encounter, but Jawbone and his cohorts were victorious. The Silver Temptress, however, managed to escape with her life.

It wasn’t long before Jawbone encountered her again. This time, the Silver Temptress was able to obtain an Invisi-blade. She attacked her nemesis with the mysterious ghostlyweapon, and was able to gain a considerable advantage as Jawbone’s hair was cut shorter and shorter over the course of the fight, meaning his strength diminished with each passing moment. Luckily, his teammate, Regalia, showed up to help. And thanks to her sword skills and a para-natural ability to detect the Invis-blade’s movements, they were able to thwart her.

Jawbone would continue to battle the Silver Temptress and other villains over the ensuing years. The Asylum would also gain a new member by the name of Slingshot, with whom Jawbone would form a very strong personal bond.

Their missions grew more and more dangerous as a multitude of hyper-villains continued to pose threats to the safety of Earth and its people. However, their greatest threat to date arose when Messiah revealed to Jawbone and the others that the biblically based hyper-villains, as well as many other villains, had been attempting to harvest a powerful star buried deep within the planet’s core. It was one of three stars called the triplos asteri, and anyone who obtained all of them would be able to obtain a portion of the essence of the all-powerful goddess, Armonia, which, of course, in the wrong hands could be devastating. Fortunately, the minions of the Dark Master had failed to obtain the stars. However, a powerful alien warlord by the name of Emperor Kako had managed to get his hands on two of them. And now he was traveling to Earth to secure the third one from the planet’s core.

A trio of earthly master hyper-villains – Ramses Hondo, London Omega and Edgar Omega – had been working on behalf of Kako to excavate the star, primarily through the tools and tech of Edgar’s multi-national corporation, Universal Intelligence. And after several years of drilling at the Hollow Earth Excavation Site, they’d finally retrieved it. They now awaited Kako’ arrival. However, it was the Sacred Asylum who arrived first!

Messiah had given them the order to stop the triplos asteri from getting into Kako’s hands at all cost! Jawbone and the others initially attacked the giant drills the scientists were using to penetrate the core, causing a massive explosion and a great deal of chaos amongst the dozens of workers at the site. But once the heroes discovered the triplos had already been pulled from the core, they turned their attention to getting the star. They were confronted by a deluge of hyper-powered henchmen, including Fahim Nuru, Askari Badru, Shefali Chisisi, Jamad Musa, Qadira Azizi, Shafaf Ottah, Rosko, Caliber, Doc Holiday, Chopper, Tumbleweed and Brandi Beretta. Not to mention the powerful telepathic duo of Edgar and London, as well as the alien warrior, Ligselzus.

Jawbone’s immense strength served him well as he crashed through the defenses of the villains. He absorbed violent kicks from Qadira, used his massive club to deflect an onslaught of bullets from Chopper, and was even able to grab a 2-ton piece of drill and launch it in the direction of the Omega Twins, forcing them to dive for cover! But when Jawbone came face to face with the sharpshooting rage-monster known as Dezzie, he was stopped dead in his tracks.

The titans clashed in an earth-shaking encounter, as it was clear the Sacred Asylum would have to go through the gunman in order to get within reach of the triplos asteri. Jawbone let loose a thunderous combination of punches and clubbing blows, but with every act of aggression against him, Dezzie’s physical capabilities increased. Soon, Dezzie was the one landing the crushing blows to the body and head of Jawbone. Additionally, he was finding opportunities to fire off rounds from his Desert Eagle handguns. The bullets were still unable to penetrate Jawbone’s skin, but the force of the impacts continued to keep him off balance. Jawbone eventually found enough strength to rush Dezzie and tackle him to the ground. As they tussled, Dezzie grabbed a handful of Jawbone’s hair, and ripped out a chunk of his long, brown locks at the root!

Jawbone screamed in pain as his strength level dropped dramatically. His durability level also took a hit, allowing the next pair of bullets from Dezzie’s hand-cannons to rip through his shoulder! With his options limited, Jawbone used as much strength as he could muster to smash through the frame of the steel walkway on which they’d been battling. It caught Dezzie off guard as both men fell, along with the structure, 30 yards down, and hit the next level with an excruciating smash. Nearly a metric ton of metal and rock also came crashing down, right on top of the two brutes, burying them.

It wasn’t long before Jawbone and Dezzie began digging and punching their way out of the carnage, but it was clear that it would be a few moments before either was able to rejoin the battle that was still violently raging on above…