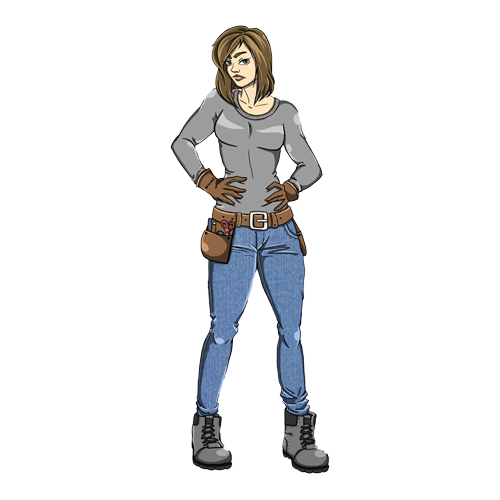 Growing up in Los Angeles, Janice learned quickly that two things mattered most above all to people in her city: looks, and wealth. However, her family was not considered glamorous, and they did not have much money. Her mother was a stay-at-home mom turned supermarket cashier, and her dad was a former engineer who was now a plumber. He had spent all of their savings on a business project he was trying to get off the ground, and when it tanked and failed, the family was left in ruins financially. Janice’s grandfather, her dad’s father, was a plumber and taught him everything he knew. So, after becoming blackballed in the local scientific community, Janice’s dad took up his father’s profession.

Times grew hard from that point on, as Janice had three siblings – two older brothers and a younger sister. It became a life of scraping by and hand-me-downs. Then, when the family could no longer afford to live in their neighborhood, they were forced to move to Compton. The move actually turned out to be a good change for their family financially. There were no quality plumbing services in the neighborhoods, and Janice’s dad almost doubled his earnings. Additionally, her mom was able to get another job at a nearby store. Soon, Janice’s mother gave birth to another son, and all seemed to be going great for the family.

Janice’s life however, became more difficult. She was the only white girl in her class, and one of the few in the entire school. The black kids constantly picked on her, and Janice would often get into fights. However, she was a scrapper and she did not take any mess from anyone. Soon after, Janice earned the respect of her peers and became embraced by her classmates. Life was good again.

Nevertheless, Compton did not offer the luxury of Janice being able to grow up soft. As she grew older, she became entangled in the wrong crowds and fell into gangbanging. She was the only white member of her neighborhood crew, and as such she was molded into a hardcore gangster. Eventually, her criminal activity landed her in a juvenile correctional facility for armed robbery. She would spend 8 years between there and the penitentiary, after an old lawyer friend of her father’s was able to land her a great plea deal.

Janice served her time, then continued to ride with her gang. While inside, though, she changed, as she became enthralled with bodybuilding. At first, Janice lifted weights to make sure she could protect herself and throw down with anyone if she had to. After a while, however, she formed an aptitude for it, and then began reading books from the penitentiary library on weightlifting. As her physique became more and more impressive, other inmates began calling her “Swollina”, – a moniker taken from the slang word for being crazy muscular, “swoll”, combined with the fact that she had the face of a classic white Disney princess. This hobby consequently kept her out of trouble, and eventually the interest carried her through the rest of her sentence until she was released.

Once outside, Janice continued bodybuilding under the name Swollina, and she quickly became known on the bodybuilding scene. She began competing in the local circuits, killing the competition, and it was not long before she was winning bodybuilding competitions across the globe and making major money off endorsements. Companies loved Swollina! Meanwhile, her youngest brother, Carver, had become one of the best young basketball players in the country. He earned a full athletic scholarship to Platinum City University, and the summer before he was to begin his freshman campaign, he was invited to play in a prestigious all-star game in Platinum City.

Janice, of course, went to cheer on her brother, but she soon found herself running for her life, as the arena started falling apart due to a series of explosions set off by the villain Fiasco, as he was fleeing from superhero Captain Noble. During the chaos, she and her brother found each other and attempted to flee the building, however, one of the explosions caused a wall to come crumbling down toward them. Janice shoved Carver out of the way, but found herself covered in brick and mortar. She was trapped.

In the aftermath of the incident, Janice was finally uncovered and taken to the hospital. When she woke up, she learned that she had suffered a major injury to her spine. She was lucky she was not paralyzed, but it was serious enough that she was not able to continue her bodybuilding career. Swollina was forced to retire. Carver, however, was saved from any injury at all, thanks to her. He was able to continue playing basketball, unlike a friend of his named Reginald Watson, who was also supposed to play at PCU on a full scholarship. Reginald’s legs were crushed, and though he would eventually walk again, his once promising basketball career was over.

Janice took solace in the fact that she was able to save her brother, and it sustained her during her rehabilitation process. Additionally, her father was right by her side through the recovery period. He always felt bad that his failure as an engineer and businessman forced his kids to grow up under such rough conditions. He blamed himself for what happened to Janice in her life, but she said whether she had gone on to become a saint or a convict, she would have been at her brother’s game regardless, and would have still sacrificed herself to save him. That was when her dad decided to do everything in his power to help Janice become a success in her life moving forward. He called all of his remaining loyal contacts at his alma mater, Platinum City University, along with asking for help from the university’s basketball coach, and together they were able to pull enough strings to get Janice admitted. From there, she decided to study engineering, like her father. She was always bright, but had never blossomed due to being caught up in the streets. Eventually, she was able to graduate with a mathematics degree, and go on to get her Ph.D. in Mechanical Engineering.

When she graduated and became a doctor, Dr. Janice Heimann went on to work for a few great engineering firms, and paid off her school loans with the high salaries she was able to earn. It was not until she began working on her father’s failed business project again that she made it big, though. She was able to fix all of the things her dad did wrong and turned the project into a huge success, revolutionizing the way machines could be integrated with artificial intelligence. This led to her being recruited by Edgar Lockhart’s multinational tech conglomerate, Universal Intelligence, where she would rise through the ranks by facilitating the company’s expansion from simply telecommunications to construction, engineering, and more. UI’s machines raced to the forefront of the verticals, making them known as the manufacturers of the premier technology in several arenas. That was why, when Edgar needed the best to oversee Project Hollow Earth, he knew he had to have Dr. Heimann.

When Janice arrived at the project site, she did not know what exactly it entailed. All she knew was, she was supposed to oversee all the crews and the machinery being used during the endeavor. Additionally, she, along with every other member of personnel, was made to sign a non-disclosure agreement. They knew everything they were going to be doing and seeing was strictly confidential. However, when Edgar Lockhart was exposed as being the world’s biggest mastermind criminal, many of the people working on Hollow Earth were no longer comfortable working for him, and attempted to leave. Alas, they were not allowed to depart the facility, and were forced to keep working. When some protested, they were made an example of, and the rest were told that if they did not work, their families and loved ones would pay the price. Janice could only think of her family, especially her brother Carver, whom she had sacrificed herself for, and was now a big NBA star. So, she put her head down, and continued working without saying a word.

Then one day, Edgar showed up with his sister, London Lockhart, a telepath who had recently tapped into a massive reservoir of internal power, and transformed herself into London Omega. She used these new powers to unlock similar abilities in her brother, facilitating his transformation into Edgar Omega. With both Lockhart siblings operating at such a high psionic level, the final stages of the Hollow Earth Project could be carried out – which was to break through a psionic barrier around the Earth’s core, and excavate a star that was one of a trio of infinitely powerful stars called the triplos asteri. Janice was not sure exactly what the triplos asteri was or what it was for, but when her coworker and Carver’s former teammate, Reginald Watson (now a high-ranking scientist at UI known as Doctor Cog), came to her, and asked for her help with calibrating the machines to channel the psionic energy of Edgar and London against the barrier, she would begin to learn the full extent of her boss’s villainy.

Reginald told her it was imperative that they begin the mechanical adjustments right away and complete the work as soon as possible, as Edgar was apparently connected with some extremely powerful people who had no qualms about slaughtering the entire workforce, if the triplos asteri was not excavated within a very particular time period. Little did she know, these powerful people entailed multinational arms dealer Ramses Hondo, and intergalactic warlord Emperor Kako.

Regardless, Janice immediately went to work with her crews, and they began making all the needed changes over the next few days. She and her teams spent all day and night climbing up and down the massive machines, working at an exhausting pace. A process, which would have taken months for any other team to carry out, was completed in just under a week. The equipment was improved and reinforced to handle the the final stages of the excavation process.

Reggie informed his superiors that everything was in place, and with extreme curiosity, Janice watched as Edgar and London unleashed incredibly explosive amounts of psionic energy and began channeling it all through the machines! Janice could not believe what she saw next…