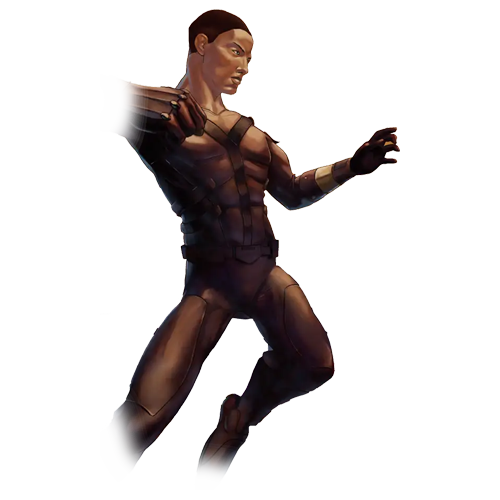 Enzo Kurosawa was born in New Japan, Platinum City and became an orphan at 3 years old after his parents mysteriously disappeared. He was found soon after by a random woman who took him to a police station and he soon found himself in the Platinum City foster care system, being bounced around from facility to facility. By the age of 7, Enzo had been in and out of 4 different homes and 6 different orphanages. His early life was filled with instability and turmoil, causing Enzo to often get in trouble. He lashed out at all authority or parental figures as well. It was obvious he was on a path of destruction. All of the statistics said he would likely be in jail or dead by the time he was 18. However, fate had other plans.

Enzo is trained in the art of shinobi (the way of the ninja), which means he is an expert in a number of combat disciplines and types of weapons. He is especially skilled in stealth and can move in and out of pretty much any place or situation without being detected. His primary weapon of choice is a pair of metallic brass knuckles built into his gloves.

When Enzo was 9 he’d become an expert pickpocket and was using his skills to rip off street vendors. Little did he know that he was being watched! A mysterious old man had been studying the boy’s every move and he had determined that Enzo was special, but lacked guidance and direction. Soon the man put himself in the position to be targeted by the young thief and sure enough Enzo took the bait. But when the boy attempted to steal the man’s wallet he found himself suddenly grasping at thin air. The confused and frightened kid slid into an alley only to find himself face to face with his would-be victim. The old man soon revealed himself to be the supreme ninja master, Danzo, and he also revealed he had stolen all of the money that Enzo had collected throughout the day. The old man then waved his hand over the money causing it to disappear completely. Enzo was mesmerized and amazed! He asked Danzo to take him on as a student. And from that day on, he was a member of the Iga Clan.

Enzo’s strong demeanor, hardened exterior and resilience made him the perfect pupil and he rose quickly through the ranks. The extreme physical nature of the training as well as the mental strain was actually therapeutic for him as it helped him to break down all the inner demons that plagued his spirit, turning him from a troubled orphan into a warrior with purpose. Enzo finally had a family to call his own. His relentlessness and dedication eventually led to him becoming a direct pupil of Danzo, where his stealth and combat skills increased greatly.

By the time he was 23, Enzo was assigned the position of a team leader. He would now have a group of ninja under his command, making him responsible for their continued training and in charge of any missions they were assigned. He was now also eligible to be called upon by Danzo for special tasks; an honor only bestowed by the grandmaster upon the most skilled ninja. One such mission was the assassination of a city council member. Despite the seemingly sinister nature of the mission, it had come to be expected that the ninja of the Iga Clan obey Danzo’s orders without question for they all trusted that whatever decisions he made were for the embetterment of the clan.

A few days after the order was issued, Enzo set out into Platinum City. Dressed in the traditional, all-black Iga Clan combat gear and mask, he crept throughout the alleys and over the rooftops of the city. The police were everywhere, due to a rash of incidents that had plagued the city over the previous few weeks, so It was imperative Enzo use complete stealth and caution in his movements.

He was nearly at his target’s home when he noticed something, it was the vigilante hero, Colonel Justice. So there were not only police officers patrolling the area, but the members of the City Watch super squad were also out and about, as there had already been several attempts made on the lives of prominent city council members. Enzo, however, was masterful in remaining in the shadows, so he went undetected by the authorities and the vigilantes. He approached the home of his target, used a glass cutting tool to make a small hole in the councilman’s bedroom window and prepared a small pistol, which was loaded with tube-shaped projectiles filled with a poison that had been concocted by the Iga Clan alchemists. He took aim at his sleeping target and fired the shot. The needle pierced the city council member’s skin, barely making him flinch. As soon as the poison entered his bloodstream, he was dead within minutes. Enzo watched as the council member took his last breaths. Having completed his mission, he headed back to Danzo’s Temple.

The police never saw him coming or going. It was like he was never there.