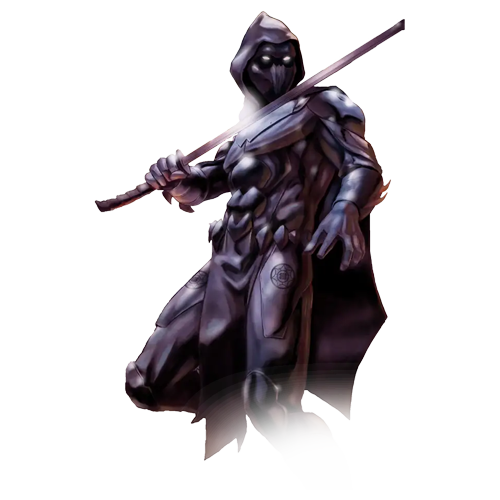 Danzo was born and raised in Maruyama, Japan centuries ago. He is one of the two sole remaining blood descendants of the legendary Iga Clan. From the time he was a toddler, Danzo was molded in the ancient art of the ninja (aka shinobi) as his clan was the last remaining ninja clan in existence. He endured rigorous training both physically and mentally. On top of learning the ninjitsu and aikido martial arts, he was made to perfect acting skills so he could blend in anywhere and move about unnoticed, as well as infiltrate any group or organization. He became learned in all aspects of psychology to better study and understand his targets. His body was turned into a weapon, learning how to be lethal with every part of himself. His hands and feet – especifically his fingers and toes – were trained to be strong as steel to help him master climbing and the ability to maneuver along walls and ceilings.

Danzo is the complete ninja master, trained in the ancient art of shinobi. He has conditioned his entire body to be a living, breathing weapon. Speaking of weapons, Danzo is a master with all of them, including, but not limited to, kitana blades, bo staff, sai, daggers, throwing stars and smoke bombs. He has completely mastered his chi, which has afforded him a plethora of powers including supernatural speed, strength and agility as well as the ability to prolong his lifespan. Some believe he is immortal. It has also given him the ability to control and manipulate fire. Additionally, he has mastered alchemy (the mixing of medicines and potions) as well as the art of illusion. He is the complete and perfect warrior.

Danzo also became extremely proficient in using numerous weapons, including kitana swords, short swords, throwing needles and stars, bow and arrows, spears, hooks and chains, nunchaku, bo staffs, blow darts, sais, and combat sticks. In addition, he was raised to master alchemy in order to mix poisons and medicine. Danzo also became incredibly learned in the art of explosives. It was imperative he mastered every aspect of being a ninja. His clan was dwindling in numbers, and there was a good chance his people and their teachings could go extinct if there was nobody left to teach the next generation.​

By the time Danzo was a teen, his abilities and his skills surpassed those of his masters. Therefore, at the age of 16 he became the youngest ever head of the Iga Clan. In subsequent years, his legend continued to grow as he went on to become a phenomenal illusionist. He routinely was able to complete impossible missions and led his clan to victory over their adversaries through seemingly magical tactics. Danzo even obtained supernatural powers such as immortality through mastering his chi (at the age of 65), and he also increased his physical attributes such as speed, strength and agility to hyper-human levels. Furthermore, the mastery of his chi also enabled him to use pyrokinesis – the ability to create and manipulate fire. In addition, he could seemingly make himself disappear into clouds of mist or smoke. It was because of these mystical traits he was able to increase the clan recruitment and expand their forces. The Iga Clan was experiencing a resurgence!

When Danzo grew to a century old, the Iga were spread throughout central Japan, and for another century, he led them to prosperity. However, after he turned 230, the most powerful Yakuza family in Japan began hunting down the Iga Clan in revenge for a hit the ninjas had executed on their leader. Despite their numbers and training, the shinobi were no match for the heavy artillery and sheer numbers of the Yakuza. Virtually every member of the Iga Clan was killed, and Danzo was forced to flee Japan. So he collected the remains of the Iga Clan fortune as well as their historical documents and chartered a ship to travel to America.

When Danzo arrived in the bay of San Francisco it was many years after the Great Quake of 2016. He traveled east and eventually settled in Platinum City. Danzo then used some of the clan’s fortune he brought with him to purchase a very particular small building with direct access to a secret, massive network of abandoned bunkers and tunnels underneath it. Here he opened a Buddhist temple, called Danzo’s Temple by the locals, on the outskirts of New Japan – a Japanese community with a larger population than the old country itself. Danzo kept a very low profile for fear of being discovered by the Yakuza in Platinum City and stayed to himself. That was until he was surprised by a visit from the sole remaining member of the original Iga Clan who had tracked him down from Japan. Additionally, his fellow shinobi, was accompanied by an infant daughter.

Danzo cared for the man the best he could, however, a month later the man passed away due to illness. This left Danzo to raise the girl. She was the only other living blood descendant of the Iga Clan, and Danzo sensed something very special about her. This endeared her to him greatly and Danzo dedicated his heart to the baby, pledging he would train her to become his greatest pupil of all time. However, before that would happen, Danzo had to create an area for them to train. So, he began renovating the bunkers and tunnels, converting them to rooms and a training facility. Over the years, he welcomed all those who needed help into his temple, providing food and a place of worship.

Every now and then, Danzo would find a child orphan worthy of becoming a pupil of his, and he would present them with a permanent home and opportunity to be his student. After welcoming them in, the children would stay in the bunkers and use the training facilities night and day, practicing every single aspect of being a ninja as taught by Danzo. Eventually, a small clan of ninjas were formed. A few years later, when his initial pupils were about 18, they began to move out into New Japan, locating all the homeless kids and orphaned children and recruiting them to join Danzo’s clan. Soon, their numbers were in the hundreds and some of the older pupils were able to take control of their own ninja squads. For decades, the orphaned and homeless kids of New Japan continued to pour into Danzo’s compound, creating a ninja force in the thousands. They continued to expand the tunnels under the city, creating a complex system of pathways.

Despite his age, Danzo remained incredibly fit; stronger, faster, more agile and skilled than any other ninja. He also retained his supreme wisdom. However, when the clan had established a strong leadership team, Danzo slid into the shadows and guided the Iga Clan from behind the scenes. During this time they rose to power in the underworld through their work as assassins, infiltrators, thieves and sabotage experts. The resurgence of the Iga Clan was real and this time they were here to stay.

Over the years, as the Yakuza families from the old country rose to great power in New Japan, they speculated if the Iga Clan was indeed the same one from Japanese history. More so, they pondered if the leader named Danzo could be the same Danzo born over 200 years ago in the old country. Figuring there was no way it could be the same man, the Yakuza families settled on the belief it was a group of Japanese trying to resurrect the history and art of ninjitsu and left it alone. The ninja did not meddle in Yakuza affairs and vice versa, so there was no reason for them to investigate any further. That was until all hell broke loose throughout Platinum City.

The Smash and Grab bank robberies as well as the assassination attempt on Platinum CIty Mayor, Gemini DeLisi had the entire city in an uproar. Not long after, there were more assassination attempts made on city council members, but they were thwarted by the Platinum City Knights (Black Jag, Night Bird and Metro). Still things were turned upside down, causing the police presence in the streets to be constant and widespread, and in turn bringing much of the organized crime activity to a complete halt.

The numerous crime families became enraged from losing millions of dollars in a matter of days. Consequently, they came together and requested a meeting with their overlord, Edgar Lockhart. At the gathering, Edgar listened to their gripes for as long as he could before exploding in a fit of anger as he was also in the midst of some hard times: his proposal for new construction had been denied yet again, ruining his billion dollar plans with his mystery associate, and two of his best and most trusted assassins had failed to eliminate his opposition in the City Council. Edgar sternly reminded them of this, along with the fact that everything in the city flows through him; if he was not able to operate his empire as needed, they would not be able to run theirs as a result.

This realization put things more in perspective for the crime bosses, and soon they were all on the same page. Edgar then told them if they wanted things to return to normal, his opposition in the City Council needed to be eliminated. However, he could not risk sending any more of his assassins after them. He had already exposed himself too much. None of the crime bosses could risk moving against Platinum City politicians, either, as the police and the heroes were on constant alert. That is when the top Yakuza boss, Daichi Matsuzaki from the Matsuzaki Clan, suggested the Iga Clan as a solution, reciting the epic history of the ninja empire and how they have emerged once again in New Japan. Edgar demanded Matsuzaki secure their services and dismissed the crime bosses with orders to lay low until this matter was resolved.

Daichi went through a number of channels to contact the Iga indirectly as to not have things traced back to him. Once contact was made and the services of the Iga Clan were secured, payment was transferred along with the list of Platinum City Council members that needed to be assassinated. Even though Danzo approved the contracts, something did not quite feel right to him. Nevertheless, he assigned a few of his most trusted ninja leaders to carry out the jobs…