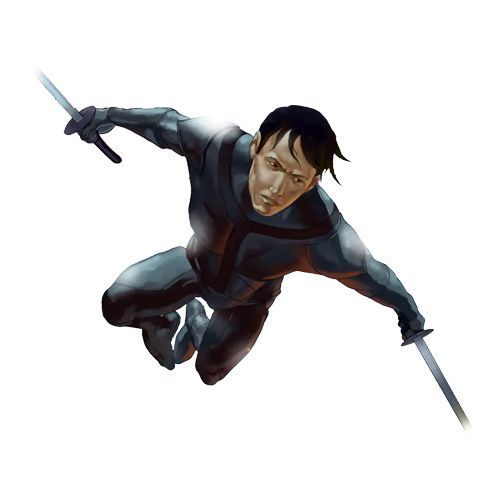 Kaito Hayashi was born in Tokyo, Japan. The unwanted child of a low-level Yakuza boss and their family servant, he and his mother were shipped to the US as to not become a blight on the Japanese criminal family’s reputation. They arrived at New Japan in Platinum City when he was just a year old, where they lived on the streets for quite some time before finding refuge in a shelter. Kaito’s mother’s experience as a housekeeper and nanny came in handy though, and her work helped them earn their keep at the shelter. Finally, they had a roof over their head and regular meals. When he turned 4, Kaito began to receive basic schooling as well. Everything was looking up for the mother and child over the next number of years. That was until unfortunate events struck again.

Kaito has been trained in shinobi (the art of ninjutsu) and is an expert in several martial arts disciplines. He also excels in the use of small explosives, such as smoke bombs, flash bombs, fire bombs and more. He is a pyrotechnical genius.

A lack of funding caused the shelter to close and once again, Kai and his mother were homeless. She was able to find one-off jobs here and there working for local businesses who needed help on a temporary basis, but she was never able to land a consistent gig. It was hard enough to find someone who was willing to hire a homeless woman that dug through restaurant dumpsters for food and broke into a gym to bath herself and her son, let alone allow her to bring her son into work everyday. Then, Kai’s mother interviewed for a full-time nanny job. The position specifically required for the candidate to be from Japan and understand old world customs, speak fluent Japanese, and to live with the hiring family all year round. It was also preferred the candidate be single with no kids of their own. Kai’s mother was a perfect fit, but she had to keep her son a secret throughout the interview process. It was difficult enough to convince them she was qualified without any verifiable experience. However, her glowing review from the Regional Homeless Facilities Director helped put her over the top. Her days of working at the shelter ended up landing her the job. The hiring parents figured if the woman could nanny kids in a homeless shelter for years, watching over their kids in their expensive mansion with resources abound would be a breeze. However, they did not know she had a son, who was now eight years old.

When Kai’s mom returned to their abode inside an abandoned building, she was filled with joy but also nervousness. She did not know what would happen to her job once she showed up to her new home with Kai in tow. Unbeknownst to her, Kai realized her worry despite her attempts at hiding it, and knowing this was the opportunity of a lifetime, Kai took it upon himself to unburden his mother. That night, after a modest celebration, he packed his things and ran away. Despite his age, he was equipped with enough savvy and survival skills to make it on his own.

When she awoke, Kai’s mother was devastated to find her son missing. She searched for him for days but was not able to find him anywhere. Reluctantly, she began her new job having lost her son.

For the next year, Kai went about scraping by before eventually finding Danzo‘s Temple. He frequented the establishment for food and shelter and eventually was noticed by a man that served as one of Danzo’s ninja team leaders. The team leader could tell the boy was tough and resilient and after checking into his background, he recruited Kai to join the ninja training program. He accepted the invitation without hesitation and began his training immediately. Kai was accepted amongst his peers pretty quickly, finally giving him the family he lost when he left his mother. Kai responded with undying loyalty and dedication to the clan, relentlessly working at becoming the greatest ninja he possibly could.

He continued to achieve success, and would often venture out into the city to watch his mother from afar. The fact she was doing as well as ever made it easier for him to continue on his path to greatness. Over the years, he rose through the ranks and impressed Danzo with his phenomenal knowledge of explosives and his arson skills, and by the age of 21 he had been appointed a ninja team leader. This title meant that he could be entrusted with the most important tasks and missions… such as the assassination of city council members.

The clan had been paid a large sum of money to make certain Platinum City Council members disappear. Danzo had been led to believe that several of the council members were corrupt, however, it was not his place to ask questions, it was simply his duty to see the job through to its end. Kai received his target’s name from Danzo, then set out into Platinum City – along with Enzo and a few other ninja team leaders – to carry out his mission.

That night, the streets were crawling with police patrols and vigilante superheroes, as several attempts had already been made on the lives of these council members. But the recon information gathered by the network of Iga Clan members around the city was flawless and Kai was able to move about without being detected.

He arrived at his target’s house, used some Iga Clan tech to decode and disarm the home security system, slipped inside and began to lay his trap. Using a mix of common chemicals and unique concoctions by the Iga Clan alchemists, Kai set up the perfect arson hit. He strategically placed the chemicals near a rigged outlet in the council member’s study, and when it sparked it created a small, contained fire. But when the council member came to investigate the noise set off by Kai, upon opening the door to her study, the rush of oxygen created a backdraft explosion that instantly incinerated the woman.

Kai watched from a perch across the street as the fire busted out the windows and shot throughout the house. His plan was executed with amazing precision; the city council member was gone, and all arson investigations would show the fire was caused by faulty wiring.

Another of Edgar Lockhart‘s opponents was successfully eliminated…