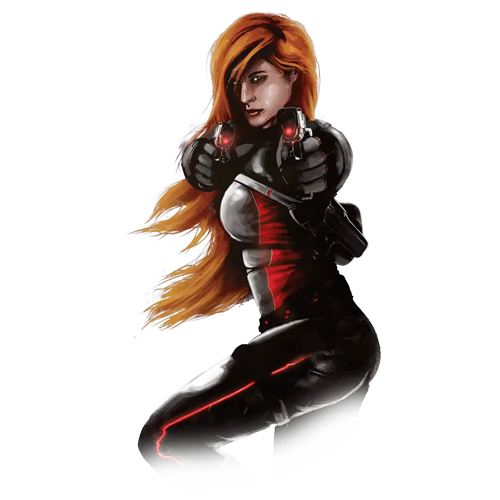 Rosalinda “Rosko” Kortellini was born and raised in Cinisi, a town on the northwest coast of Sicily. She was birthed into the Kortellini Family – an independent faction of master hitmen whose skills are only taught to the first born son of every generation. However, when the wife of the only living Kortellini hitman was assassinated as payback for her husband’s deeds, Rosko’s father – Paul Kortellini – vowed to never marry again. In turn, he broke centuries of tradition and decided to train his only child, a girl, to continue on the tradition of the Kortellinis.

Rosko can release extreme levels of adrenaline and endorphines into her own bloodstream which enables ultra-heightened crystal clear eyesight and magnified vision. She can also slow down time for quick moments, allowing her to see situations much differently and analytically than her foes and her targets. She is also trained in several traditional martial arts forms as well as a couple of advanced fighting techniques that she has created herself. She utilizes weapons from her expansive arsenal of firearms including 9mm, 22mm, 35mm and 45mm handguns, just to name a few.

Through her early life, her every waking moment was spent with her father and dedicated to perfecting her marksmanship, her combat abilities, and her physical fitness. Paul routinely pushed Rosko to the limit, often exhausting her to point of complete physical and mental failure. However, it has been in her DNA from birth to never give up and to fight. So, Rosko would be right back at it as soon as she was able to physically and mentally resume training. Each time she bounced back, she was stronger. Because of this, Paul would call his daughter “Butterfly”. He would often say it was his job to break her down and force her into a cocoon so she can emerge a more amazing creature. Butterfly was also a loving term of endearment Rosko took to with great affection. Thus, for years Paul and Rosko forged her entire being into a dynamic, incredibly efficient and deadly assassin. This was all for a reason though: it eventually unlocked the Kortellini Gift inside of Rosko. The Kortellini’s had the ability to release ultra-heightened levels of adrenaline and endorphins into their bloodstream, enabling crystal clear, magnified vision, as well as seeing everything move in slow motion. This – combined with her master-level knowledge of firearms mechanics and the cultivation of her own unique form of martial fighting consisting of punches, gun smashes, pistol whips and shooting – made Paul as proud as a father could be. Rosko grew into one of the most skilled Kortellini’s of all-time. However, he would not be able to enjoy Rosko’s greatness for too long.

On her 19th birthday, Rosko would go on her first mission. Paul had accepted a contract from a long time employer, but he suddenly had a heart attack and fell incredibly ill. He would not be able to fulfill it. To accept a contract and then back out was strictly forbidden and would forever taint the Kortellini Family name. Rosko told her father she would complete the mission for him. Initially he fought the idea, but eventually he had no choice but to let his daughter do the hit for him. Rosko executed her task perfectly, assassinating the target in even better fashion and with better proficiency than her father ever had on any mission.

Over the next few days, Rosko tended to her father with great care. It appeared Paul was slowly declining in health however. It was then Paul’s employer reached out to him to express how impressed he was with the hit and sent another contract job with an urgent request saying it carried the utmost importance. Once again, Rosko would go in place of her father and flawlessly fulfill the contract. However, this time when she returned from the mission, she saw that her father had passed while she was away. She wept over his body for a minute before noticing something was in his hands. It was a piece of parchment folded in half. When Rosko opened it, she noticed a perfectly preserved butterfly with a note from Paul saying how proud he was of her, how she had grown into a better Kortellini than he had ever been, and to never stop transforming into a better version of herself. From that moment on, Rosko was not only carrying the tradition of her family name, but a promise to execute the greatest contract of all time: the letter her father wrote her on his deathbed.

Over the next number of years, Rosko became famous for her ability to fulfill any contract regardless of how difficult it was. She was known for being able to execute any target with one shot using any type of pistol. Stories of her ability to clean out an entire room of mobsters using handguns without having to reload once traveled far and wide. Rosko was the perfect assassin and arguably the greatest Kortellini in the history of the family. When her legend carried across the seas, Rosko’s name began to float around Platinum City. It was not long before she was contracted to perform major hits on some of the city’s top crime bosses.

Despite incredibly lucrative offers due to her 100% success rate in Platinum City, Rosko remained independent, never siding with one mafia family. She enjoyed her freedom too much to do so. Then, one day Rosko was contracted to assassinate Edgar Lockhart by one of his criminal rivals. However, Edgar became privy to the plan. As normal, she was following him, discovering his routine and detailing his security team to calculate the perfect time, place and method of attack. Unbeknownst to Rosko though, Edgar picked up her stream of consciousness and began listening to all her thoughts. He allowed her to continue to follow him so he could learn her entire plan. Then, when Rosko went to fulfill the contract, she was ambushed by Edgar’s bodyguards. Rosko ended up killing most of them but she was eventually subdued. After she was captured, Edgar confronted her, revealing his power of mind reading. He told her the only way she could continue to transform into a better version of herself was through working for him; that he could provide her with the tech and resources that would enable her to elevate her prowess and success to unparalleled levels. Edgar played her heart like a fiddle, saying the only way for her to honor the letter from her father would be to become a part of the grandest empire in the world which he was forging. The persuasive speech resonated with Rosko and her desire to honor her father and family legacy, so she decided to join the Lockhart Force and serve Edgar, becoming one of his most reliable assassins by the age of 26. It is for this reason she was sent with Dezzie to complete the contract hits on the Platinum City council members that voted against his property zone exception proposal.

After being alerted by Edgar, the Platinum City Knights were out patrolling the neighborhood her targets resided in, Rosko moved swiftly and with purpose. She was completely locked in, ready to eliminate her targets and anyone who stood in her way. So, when she arrived at the first home of a city council member on her list, she wasted no time. However, Black Jag and Metro spotted her and quickly moved in.

She was just about to fire a killshot through the window from the fire escape across the alley when Black Jag launched his energy axe at her. Sensing the weapon flying her way, Rosko immediately jumped down to the ground and began firing her guns at the two heroes. Black Jag continued to run forward, utilizing his energy shield to deflect the bullets while Metro maneuvered himself behind a dumpster to find cover and return fire. His bullets were shot directly at Rosko’s head, however, she fired bullets to intercept his in mid-air. Metro couldn’t believe what he was seeing – her timing, speed and precision were uncanny!

It was then that Black Jag came at the assassin with a right fist. She parried the strike, hitting his wrist with the butt of her gun and quickly firing another shot at Black Jag’s head. Luckily for him, his momentum was carrying him to the side already and out of harm’s way. However, the loud blast of the firearm caused his ear to go deaf for a moment and dropped him to the pavement. Metro resumed fire, now that Black Jag was not in the way anymore. He unleashed a barrage of bullets, all of them being intercepted mid-air by return fire from Rosko. Meanwhile, Black Jag shook off the effects from the gun blast and rolled over to grab his axe. He got to his feet and engaged the fired brunette, but again, she blocked his strikes with her firearms. Black Jag was beginning to realize that this was no normal gunwoman and these were not normal guns. She continued to defend his strikes with her advanced weaponry before finding an opening and landing a kick, followed by a pistol whip, staggering the leader of the Platinum City Knights.

She was immediately fired upon by Metro though, so she never had a chance to gather herself or initiate an offensive. The battle continued this way for a few minutes before Metro put down his primary gun and brandished his new advanced weapon (courtesy of his teammate, Night Bird‘s modifications). It was a rifle that had the ability to lock onto a specific heat signature and fire bullets that tracked that target and that target only. He quickly aimed and locked onto Rosko, firing a shot while his partner was battling their adversary. The bullet swerved and danced in the air as Rosko moved. Her Kortellini Gift was in full force though, and she was able to get out of the bullet’s path just in time. It did graze her, giving her a flesh wound on her arm. Rosko was then bashed by Black Jag as he rammed her with his energy shield.

She flew back into the side of the building and dropped to the ground. She got back to her feet quickly and glared at the heroes. Black Jag advanced again as Metro fired more shots. Rosko tracked the incoming bullets and fired her own to intercept them, then she quickly did a cartwheel maneuver past Black Jag followed by a roundhouse kick, breaking the hero’s nose and sending him crashing back against the wall. She then turned and began firing every bullet she had in her guns at Metro. He was forced to take cover behind the dumpster again, giving Rosko a chance to sprint down the alley in the opposite direction. She reloaded in a flash and pointed her guns over her shoulder to empty two more clips toward the heroes behind her. They jumped for cover once more, and by the time they regained themselves, Rosko was long gone.

The two heroes were successful in stopping the assassination, but knew the beginning of something sinister was at hand.