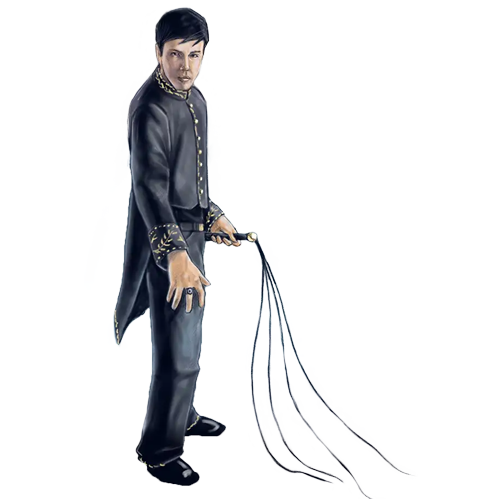 For millennia, the spirit of wise King Solomon, son of King David in the Old Testament, has been reborn into the flesh of a chosen spiritual warrior. Their purpose has been to grow strong in the ways of righteousness and serve the righteous faiths autonomously. While the chosen one most frequently collaborates with the Vatican, they hold no exclusive allegiance to them. Their only allegiance is to the will of God. As such, the Vatican and Catholic Church are merely an aid in the holy quests set upon by the spirit of Solomon. Other aids are the Islamic and Jewish religious institutions as well. They all recognize the legacy of King Solomon, and have pledged to help the spirit in any quests upon its return.

He carries the ancient ring of Solomon which gives him supreme spiritual strength, enabling him to control demons, transform the spiritual energy of Hell into energetic bursts, and draw directly on the holy spiritual power of Heaven. He has the ability to use spells and enchantments, as well as spiritual relics. He also uses a whip made from pieces of the shroud of Tourin.

Thus, when Seraph Solomon is reincarnated, he has one sole purpose: to eradicate any impending demonic attacks. As it has always been, Heaven and Hell continue to wage war over the souls of mankind, and dominion over the afterlife. When the forces of Hell send their forces to our world to do evil, they do so in the form of demonic possession of people. This often results in numerous wicked deeds being performed, ruining the lives of many, while ultimately resulting in the demon claiming the life of the individual for itself, increasing their own standing within the ranks of Satan’s army. The people whose lives are ruined often end up straying from God, which in turn directs their souls to Hell once they pass, further increasing the power of the dark Underworld.

The holy men of all faiths throughout the world have worked to thwart these demonic possessions over the course of history. Many started out unsuccessfully, but as time has passed, the righteous have increased their success rate fighting against the demonic. Alas, this caused Satan to increase his efforts by enacting an age old prophecy – David’s Last Rites.

David’s Last Rites is an ancient biblical text written by a scribe of King David as an addendum to the Book of First Kings, but was deemed heretical by the Nicene Council – it details a vision David had on his deathbed. It says Solomon was destined to rule over the powers of darkness, and when the world would need cleansing, his spirit would reincarnate into a heavenly ordained person. Solomon was commanded by his father to learn the ways of the spiritual realm and when the time came, to master his control over demonic forces. Satan was fated to bring about a wave of terror known as the Age of Serpents in which 666 demonic possessions would occur in a specific sequence, calling about a creature known as Legion, who serves as the master of all demons. It is said that this creature would bring the end of days.

It was up to Solomon to stop these events from transpiring when normal holy men could not. Therefore, he did all his father David instructed him, obtaining a powerful ring that enabled him to command and control demons and evil spirits. He learned spells and enchantments that exponentially increased his spiritual energy, giving him an incredible array of powers. This ultimately led to Solomon learning how to transfer his spirit through astral projection, ensuring he would be able to fulfill his father’s prophecy.

Near the middle of 22nd century, thousands of years after Solomon’s death, the elements fell into place to bring the Age of Serpents to pass. For over a year, demonic possessions had been running wild throughout the world. A number of holy men and spiritual warriors had been battling the evil presences, but they had no idea they were in the middle of a war they could not win. And so Solomon’s spirit emerged from the afterlife, and set about to drive the forces of Hell back to the Underworld.

He traveled all over world, tracking down the 666 demon-possessed humans, working tirelessly, for it was imperative that he follow the sequence of possessions in order to be ready and in the right place to confront – and hopefully stave off – the coming of Legion. Solomon’s crusade eventually led him to Platinum City, more specifically, Platinum City University.

PCU was one of the greatest institutes of higher education in the world, but it was also currently at the center of a massive shake-up. Recently it had been discovered that several members of the university’s faculty and a number of its students were members of a secret society of noble assassins called The Veil. Like Seraph Solomon, these assassins had also received a mission from God, and that was to hunt down mysterious beings called ghost orphans. These lost souls hid inside of human bodies and could only be liberated to Heaven if their human host was slain by the living-blade of a Veil hunter. The Ghost orphans, however, had found ways to fight back against the hunters, and most recently, a separate prophecy had been revealed to prominent Veil member Disa Philadelphia, that seemingly put her and the others at great risk. A student named Derek Loman, whose body harbored a ghost-orphan, announced that after seven weeks of thousands of ghost orphans silently marching around the college’s Central Administration Building, the walls of PCU would fall, and consequently the Veil would fall as well.

When Solomon arrived on campus, it was the fifth week of the march, and tensions were extremely high, because a riot involving the ghost orphans had occurred just a few nights earlier, in which a plethora of paranormal activity had been witnessed by regular students and citizens. Additionally, several Veil hunters had been forced to pull out their living-blades and cut down some of the more aggressive ghost orphans, and one hunter, Mio Sardis, was shot, while another, Quintonice Philadelphia, had been arrested. Furthermore, Mayor Gemini DeLisi, and President of the United States, Enid Remington, had been the target of an assassination attempt as they came to visit the campus. The assassination was thwarted by Veil hunter Caesar Laodicea, who proceeded to educate the elected officials on the history of ghost orphans. With this knowledge, and in the wake of the recent events on PCU’s campus, Mayor DeLisi gave a nationally televised speech in which he told the world about the existence of ghost orphans and how they were living peacefully among the citizens of Earth. The mayor also assured the people that the non-peaceful ghost orphans were being hunted and contained by “special agents” like the man who saved his life, Caesar Laodicea.

All of this led to a decision by the Veil (suggested by Caesar) to abandon their established headquarters at PCU and lay low for a bit, as they prepared for whatever was to come at the end of the Seven Week Walk. Prominent members of the Veil, including Disa, Caesar, Peter Philadelphia, Valerie Philadelphia, Reagan Smyrna, Charles Smyrna, Sheldon Sardis and Paula Thyatira, had just finished this discussion, when Seraph Solomon entered the room. Valerie and Peter brandished their living-blades and immediately demanded to know who he was. When he revealed his name, it was Veil historian Reagan who first realized they were standing in the presence of an important and powerful man.

She explained to the others the history of King Solomon’s spiritual reincarnations spanning over thousands of years, and the secret text of David’s Last Rites. Then, with a little bit of trepidation in her voice, she surmised that if Seraph Solomon had returned, it must mean that the Age of Serpents is at hand. Solomon confirmed that this was indeed the case, and that currently the final wave of demonic possessions is upon them in Platinum City. He revealed that the holy men in the Christian, Islamic and Jewish faiths, who had previously been battling the possessed people, would not be able to exorcise the next group of extremely powerful demons. And that is because these particular demon-possessed people were also phantom-fused with ghost orphans. He would need the help of the Veil and the power of their living-blades to stop the coming of Legion.

It was Disa who began to speculate and wonder if the Age of Serpents and the Seven Week Walk prophecy could somehow be connected. Peter and some of the other hunters, however, were skeptical that this guy was truly the Seraph Solomon of legend. Disa nodded to Solomon, and the seraph began citing an enchantment. His majestic ring glowed brightly, as the room went dark, and mist formed in front of them. Peter and Valerie again drew their swords, as they sensed the presence of something vile. Then, demons materialized before their very eyes, striking fear into their hearts. Nevertheless, Peter and Valerie remained courageous and ready for battle. However, Solomon walked forward, and motioned for them to put their swords down. A white aura surrounded him and was so powerful, the pressure from his spirit began shaking the walls. He then commanded the demons to kneel before The Veil, before finally instructing them to return to Hell. When the demons genuflected and left, the other hunters were convinced Solomon was who he said he was.

Solomon then told the hunters that he needed only a small contingent of the most skilled swordsmen to accompany him on his quest to exorcise the demons, and slay the ghost orphans to prevent the Age of Serpents prophecy from being fulfilled. Disa turned to her son, Peter, and her daughter, Valerie, and assigned them the task of assisting Solomon. They eagerly agreed. Meanwhile Disa, Caesar and the other elders would continue to lead the other Veil members as they regrouped, and set up new bases of operations, away from Platinum City University.

Solomon thanked them, and promised that they would all see each other again in a few days’ time. With that, the trio set out to take care of business. When the three of them were well on their way, and away from the others, Solomon revealed to Peter and Valerie just how serious the situations was: 662 of the 666 possessions had already taken place, and the final four now were at hand.