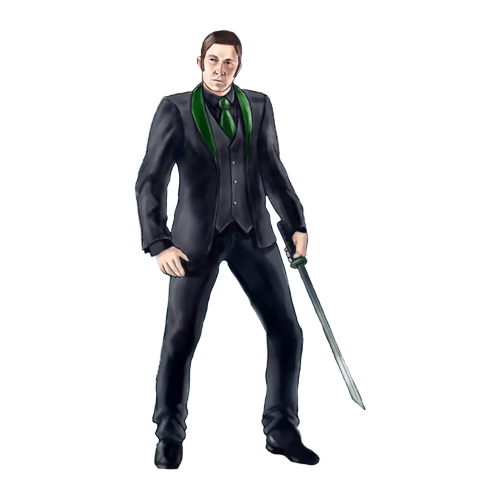 The House of Laodicea has always taken a less than conventional approach to their role in the grand scheme of the ghost orphan saga. And Caesar has been the most unconventional of them all. The house of Laodicea is one of the seven bloodlines comprised of noble assassins, whose purpose on Earth is to hunt down lost souls known as ghost orphans, and send them to heaven. This mission is made more difficult by a number of complications. First is the fact that there is another group of assassins from hell, called reapers, who are also hunting down ghost orphans. Secondly, the ghost orphans learned how to hide in human bodies through a process called phantom-fusion, and so they are much harder to track and detect.

The Seven Families, however, have been fairly successful in battling both the ghost orphans and the reapers throughout the centuries, and Caesar Laodicea had been one of the reasons behind the most recent success of the Bloodlines (whose descendants collectively call themselves The Veil). For a time during the late 20th and early 21st century, the ghost orphans, under the leadership of a ghost orphan called Kallisto (now hiding inside the form of Virginia Ice), had conducted a number of violent raids on the Veil families, which resulted in the total extinction of two of the bloodlines and the weakening of the other five. The Veil hunters were forced into hiding.

Caesar was born from one of the seven bloodlines of The Veil, which means he is specially equipped to hunt mysterious lost souls known as ghost orphans. He carries a weapon called a living-blade, which is infused with his blood. He is an expert swordsman and is trained in a number of fighting techniques. He also studies meta-paranormology, which means he has an intense knowledge of how hyper-abilities work within humans who are possessed by spiritual beings.

And then came the rise of Disa Philadelphia, who led her own bloody campaign against the ghost orphans, and subsequently brought the Veil back to an advantageous position in the secret war, as well as a position of prominence in the greater public community. The legend of Disa Philadelphia’s 40-day rampage, in which she tracked and caught thousands of ghost orphans, is well known by all Veil hunters. However, Caesar’s more than significant role in how it all went down is rarely spoken of.

As a young man growing up in uptown Manhattan, Caesar always had an unhealthy fascination with ghost orphans. We say “unhealthy”, because his fascination didn’t stem from a purely historical, or potentially tactical nature; instead, it came from his desire to have something that all ghost orphans had – earthly immortality. You see, when an individual who is phantom-fused with a ghost orphan is slain, that lost soul simply jumps to another human body. Unless they are slain by a living-blade, which is the weapon all Veil hunters carry. In that case, the lost soul is liberated to heaven. Conversely, if they are slain with a reaper’s ghost-blade, the souls are sent to hell. On the other hand, if they can avoid being slain by either, they can continue living on for centuries and centuries.

Caesar believed that this put the Veil hunters at a disadvantage. So, as a high school student he began studying meta-paranormology in an attempt to uncover a way to translate the ghost orphans’ power of immortality over to himself. He became obsessed, but he quickly learned that any transference would require not only a metaphysical process, but a spiritual process as well. When he wastwenty years old, he actually found and kidnapped a woman named Davette Potiphar, who he’d found had had a ghost orphan living inside of her for several years. He kept her in a basement in the Bronx, and conducted a number of scientific, metaphysical and spiritual experiments on her. After several weeks, Caesar had failed to find a way to gain immortality, however, he did discover a technique that would come to be known as soul-tracing, in which he could detect the presence of ghost orphans, even if they were hiding quietly inside of a human body.

His invention was lauded as groundbreaking for a time – and Disa Philadelphia used soul-tracing to an extreme extent during her 40-day excursion. However, the technique soon began to produce false-positives. In other words, Veil hunters were detecting powerful spiritual presences in people, and killing them, only to find out they weren’t actually ghost orphans. The leaders and elders of the Seven Families began to decry soul-tracing, and soon, the practice was totally outlawed by the Veil.

This did not stop Caesar from continuing to kidnap and experiment on ghost orphans. And while Disa Philadelphia and the other prominent leaders of the Veil, Charles Smyrna and Sheldon Sardis, continued to chastise him for his methods, most other members of the Laodicea bloodlines followed his lead. They still sent their children to Platinum City University, as was the tradition for all Veil kids, but they set up a separate base of operations in New York City, and have continued to hunt down ghost orphans. Occasionally, hunters from Laodicea will combine forces with the core Veil members in Platinum City, but it’s pretty seldom.

It was a number of events during an autumn in the early 22nd century that compelled Caesar to lead as many of the Laodicea hunters as he could find back to PC. And they arrived just in time, as the reaper Jezabella had devised a plan to attack Platinum City’s Mayor, Gemini DeLisi, and the President of the United States, Enid Remington, while they visited Platinum City University. Jezabella had already killed a number of secret service officers, and was moments away from killing the mayor and the president as well, when Caesar and twenty other hunters from the House of Laodicea showed up. They battled the hellspawn, overwhelmed her, and forced her to retreat.

That evening Caesar requested an audience with the Mayor and the President, so he could explain to them the significance of the strange occurrences that had recently plagued Platinum City University.

Caesar, his wife Racine Laodicea and his cousin, Bryce Laodicea, told them about the silent marchers who were currently circling the Central Administration Complex of PCU. He told the politicians that these people were ghost orphans, ancient lost souls that have been hiding in human bodies for centuries. He explained that the ghost orphans were being hunted by a group of assassins called the Veil. Then he revealed that he was a member of the Veil, and that several of the faculty members and students of Platinum City University were Veil hunters as well. He then concluded by telling them that the protest and the paranormal riot involving a number of hunters (Mio Sardis, Terranace Smyrna and Quintonice Philadelphia) that had happened a few nights before, was most likely a result of the war that had been secretly waging between the two sides.

President Remington and Mayor DeLisi were taken aback by these revelations. Caesar then assured them that The Veil were good people, and that they were protectors. They spoke for a little while longer, after which the three hunters left the office to regroup with the other Laodicea hunters. Disa Philadelphia, however, was the hunter waiting to meet him. The two old frenemies had an intense exchange of words, as Disa was terribly upset that Caesar had spoken to DeLisi and Remington without consulting the other elder hunters, and Caesar was perturbed that the other elder hunters had not called him a lot earlier to help out.

They both had their reasons for not getting in touch with the other, but their discussion would have to wait, because at that moment a news alert hit their phones – Mayor DeLisi was about to speak to all of Platinum City. Disa and Caesar rushed over to the Deep Wing of Platinum City University, where all of the Veil hunters in PCU, including the Laodicea hunters, had gathered to watch and listen.

Mayor DeLisi, with President Remington standing behind him, addressed the frightened people of Platinum City and told them that he had recently gained some knowledge that could help explain the paranormal riot that had taken place on the PCU campus. He said that he had learned of ancient beings called ghost orphans. He said they were living among us, but we had nothing to fear because for the most part they were benevolent beings who simply wanted to live quietly. He then explained that sometimes when ghost orphans DO get out of hand, there are men and women out there who specialize in neutralizing them. The mayor said he’d been in contact with these neutralizers, and had been assured that everything is okay, and that any paranormal threat need not be worried about. He concluded by asking the citizens of Platinum City to remain diligent and encouraged, and then signed off.

As the screens in the Deep Wing went silent, a roar of discussion rose! The elder hunters quickly retreated to an office to talk. Disa Philadelphia, Sheldon Sardis, Charles Smyrna, Peter Philadelphia, Caesar Laodicea and Paula Thyatira were the most prominent among the group. Everyone immediately berated Caesar for revealing so many secrets to Mayor DeLisi, and then allowing him to go on national television to reveal those secrets to the world. After letting them all say their peace, Caesar finally offered his reasoning.

He explained that over a dozen agencies were going to be conducting investigations, and that eventually someone was going to dig up the full truth. He then reasoned that by giving the mayor and the world a little bit of information about the ghost orphans, it would help alleviate some of the pressure of the investigations. Instead of eventually having to reveal all of the identities of the Veil hunters, he would act as the face of the Seven Families, and offer his full cooperation to all of the investigators. That way he could control the amount of information given, and how it was presented.

After more discussion, the other elder hunters realized it was actually a great plan. Though Caesar had been a little unconventional in his ways, he had never given the other hunters a reason not to trust him. And though the Laodicea hunters were based away from the others, their resume of ghost-hunting work could easily stack up next to any of the other families (except the House of Philadelphia, of course). It was agreed upon to allow Caesar to act as a liaison. His plan, however, had one more part to it: he suggested that the Veil vacate Platinum City University.

The other elder hunters were NOT so agreeable about this course of action at all. Most of them immediately shot down the idea, as Caesar futilely tried to explain that it would be wise to lay low, away from the center of attention, regroup and prepare for whatever was coming next. After several tense moments of screaming back and forth, it was Disa who stepped up and silenced everyone. As the most respected hunter in the room (and in the world) her words were always heeded. So when she declared that Caesar was right, it was only minutes before the members of the Veil were laying out plans to pack up and disappear within the next 48 hours.

Disa would never admit it, but secretly she was elated to have the cunning and talented mind of Caesar Laodicea working so closely with her once again.