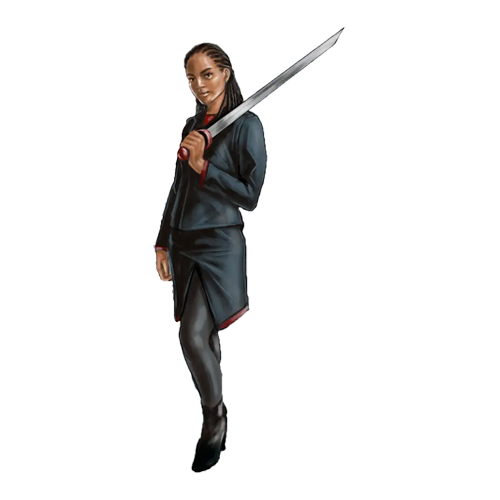 Her mother is Disa Philadelphia, who is regarded as the greatest Veil hunter of all time and the current leader of the five surviving families (the other two families were wiped out some years ago by a group of ghost orphan marauders). Valerie was not born a natural fighter, but under her mother’s strict tutelage she learned to wield a living-blade (the primary weapon with which the Veil hunters catch ghost orphans) as well as any of her peers.

Valerie Philadelphia; The Ghost of the Gap

Valerie was born from one of the seven bloodlines of the Veil, which means she is specially equipped to hunt mysterious lost souls known as ghost orphans. She carries a weapon called a living-blade that is infused with her blood. She is an expert swordswoman and is trained in a number of fighting techniques.

As with all children of the Veil, Valerie enrolled in Platinum City University at the age of eighteen. Because Disa had created a partnership with PCU president, Glorio Esteban, young hunters were able to attend and take classes for free, while using a secluded wing of the university to continue their training. In return, Veil elders would serve as professors in several educational departments, while Veil graduates, of which there were a dozen or so each year, would spend 12-18 months serving as campus security officers, before going out to fulfill their lives’ calling of hunting lost souls.

By the time she was 25 years old Valerie had grown into a well-respected hunter. Additionally, she followed in her mother’s footsteps and became a very strict trainer at PCU as well. But her true passion was joining her mother out in the field. One particular mission, however, would change things between Valerie and Disa forever. The two of them, along with her brother, Peter, had discovered that a pair of ghost orphans had been living in northern Platinum City for some some time. The orphans were hiding inside a married couple, Simone and David Kicklighter.

The trio of Veil hunters traveled to their house, but when they arrived not only were they confronted by two powerful ghost orphans, they also encountered a group of reapers, led by Alva Devine. The reapers had been tasked with hunting ghost orphans, too, but they were sending them to an afterlife of eternal damnation. Disa and Peter engaged Alva, who had already slain Simone, and Valerie went after David. After a brief battle, she had taken him down to his knees. The young huntress was preparing to finish him off, when he began begging for mercy. He pointed to his teenage son, Zane, and pleaded his life be spared, as not to leave his child with no parents.

Valerie was unmoved by the circumstances and slayed him with her living-blade, granting the lost soul passage through the Pearly Gates. She then joined her brother and mother, and together they fended off the remaining reapers. The fight was over, however, they had to figure out what to do with Zane. The boy was not a ghost orphan, but he wasn’t an ordinary kid, either – he had pyrokinetic hyper-abilities. Furthermore, he was now one of the few outsiders who had witnessed the world of Veil hunters, ghost orphans and reapers. Valerie felt they should just leave him to fend for himself; Peter, however, thought they should adopt him and train him to fight alongside them. After much consideration, Disa decided to take him in. This did not sit well with Valerie.

It was soon after this incident that Valerie began hanging out in The Gap. For many years, The Gap was an underground slum beneath Platinum City where ghost orphans were able to exist without fear of interference from the reapers or The Veil. Valerie’s arrival, however, changed all that. Her first night in the Gap, she stood in the middle of the main cross section and announced her arrival. She was quickly attacked by hordes of ghost orphans. She was able to slay a few dozen, but soon realized they would eventually overwhelm her. She fled The Gap to regroup and rethink her strategy.

Valerie decided to take a more stealthy approach. She donned a mask and began to infiltrate the rundown underground town. She even sold her apartment in Platinum City, and secured a residence in the Gap. She continued to hunt with her mother and others from time to time, but she did most of her work below the city. She even worked with a fellow PCU professor and part time para-chemist, Mictlan, to create an aerosol that could trigger a reaction in paranormal beings which could best be described as a feeling of fear and dread. Her consistent and ominous presence haunted the ghost orphans; so much so, that she was soon being called “The Ghost of the Gap.”

Valerie continued to train students at Platinum City University, a job that afforded her a bit of a quiet reprieve as things were usually uneventful within the walls of the school. That, however, seemed as though it was about to change. It was during a fall semester that Disa came to visit Valerie in the training facility. The young huntress had just finished a session with a group of students when her mother informed her that a ghost orphan going by the name Derek Loman, during a lecture told Disa, who was instructing students at the time, that “in seven weeks’ time the walls of Platinum City would fall,” and that “The Veil would be torn down once and for all.”

Thousands of ghost orphans had gathered and were silently marching around Platinum City University’s Central Administration Complex. Derek had informed Disa that after the seven weeks of marching were up, several buildings on the PCU campus would literally fall.

Disa and the Veil hunters greatly disagreed on what course of action to take. The greater college community, and the city overall, had no idea what ghost orphans were, due, in large part, to the fact that they were hiding within human bodies. And since orphans were marching silently, the public was left to assume that these people were silently protesting Platinum City University. Speculations of why these protests were happening began to run wild in the media. It was quickly becoming a public relations nightmare.

Valerie demanded to see Derek Loman, who was being held in a chamber near the Veil training facility. She entered the room and immediately pulled out her living-blade. If not for Disa intervening, she would have surely slain the orphan right then and there. This enraged Valerie, but her mother calmed her and explained the benefits of attempting to question Derek.

Up until this point Derek had been very uncooperative, with none of the hunters able to extract any information out of him, other than the prophecy he had already expressed to Disa. The Veil had a strict policy against implementing torture, so that wasn’t an option. Valerie suddenly had an idea. She asked to speak with Derek again, promising that she would not slay him. She even relinquished her blade to Disa before entering the chamber. Once inside, she revealed to the orphan that she was the hunter known as “The Ghost of the Gap”, and released the fear-chemical into his nostrils, to prove she was not bluffing. Derek was immediately horrified to learn who she was, and from that moment on was very cooperative.

Valerie asked him to give more detail about the prophecy. He didn’t know much more, other than what he had already revealed. However, he did mention one thing that was of great concern to Valerie and all of the Veil hunters: He said that the most dangerous ghost orphan of all had returned to Platinum City. Kallisto was back.