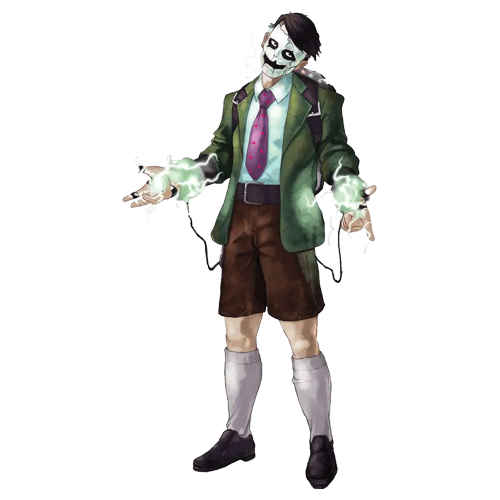 Eli Stock works as a particle accelerator technician at Midcap Technologies in Platinum City. For nearly 50 years, Midcap has been the leader in the practical implementation of particle technology into everyday life. Everything from blenders and vacuums to starships and, of course, weapons, have been imbued with Midcap augmentations.

The Prosecutor wears a special device that gives him the ability to shoot electricity from his hands. He is also an expert in particle technology.

Eli enjoyed his work and was very proud of his contributions to the betterment and advancement of humanity. Consequently, he was extremely critical of those he viewed as lazy and unambitious. And he outwardly despised those he believed to be detrimental to society. His sensibilities eventually led him to connect with The Gavel, a member of the superhero squad, The City Watch. He soon met the leaders of the team, Liberty Star and Brass Eagle, and began working with them. At first, his role was mostly complimentary. He used his knowledge of particle technology and his connections with Midcap to enhance the weapons and gear of the other heroes on the team, especially Liberty Star’s bow and arrows. Eli, however wasn’t content to sit on the sidelines, and soon joined the team as a hero himself. Using his occupational expertise, he took an old mini-generator and rigged up an apparatus that, when attached to his body, gave him the ability to shoot electricity from his hands. His love for courtroom dramas prompted him to choose the name “Prosecutor”. Plus, he enjoyed the idea that “prosecute” sort of rhymed with “electrocute.” Needless to say, he was a little bit of a dork.

During the Smash and Grab bank robbery incident, the Prosecutor was on the front lines helping to chase down and apprehend thieves. His preference for shocking first and asking questions later soon earned him a reputation, and he was all too willing to live up to his own legend. Many criminals were left shocked and twitching in the streets and several times during the day other members of the City Watch had to warn him against hurting any of the perpetrators too severely. He especially bumped heads with Colonel Justice, who was much more measured and empathetic in his approach toward the perpetrators. Despite a little bit of tension (and an interlude with a hostage situation and a particle bomb), The Prosecutor and the rest of the City Watch accomplished a lot that day, helping to apprehend over 100 thieves. They all went home that night feeling good.

But the aftershocks of the Smash and Grab Saga continued to be felt for a while. Weeks after the initial incident, several thieves were still at large. The heroic Black Jag of the superhero squad known as the Platinum City Knights was also very active in the pursuit and capture of bank robbers. Jag was hot on the trail of two suspects, Deshawn Williams and Khalil Morris – better known by their street names, “Bottles and Cans.” They were teenagers from the King housing projects of Southern Platinum City. Black Jag suspected the kids had been mind-manipulated by the villainous Hysteria to take part in the robberies. He wanted to find them, get their story and possibly defend them in court (as Black Jag’s civilian persona, Kwame Archer, was a defense attorney). The hero had reason to believe that Bottles and Cans had fled into Summercrest, an upper-class neighborhood primarily patrolled by The City Watch.

Black Jag felt it prudent to get in touch with the heroes of that area and inform them of the situation. So, he met up with Liberty Star, Brass Eagle and the rest of their team to talk. He proposed a joint effort between The City Watch and the Platinum City Knights to find Bottles and Cans and bring them in safely and soundly. The Prosecutor immediately disagreed with this plan and expressed to Black Jag that the Knights should worry about their own communities and let the City Watch handle any crooks who dared to wander into Summercrest.

Black Jag appealed to Liberty Star and Brass Eagle – and while they understood and even agreed with Jag’s notion of teaming up, they did feel that his presence, as an African-American hero, in their neighborhoods could prove to be complicated. Unfortunately, some members of the Summercrest community were a little extra paranoid at that point, and the Prosecutor, for one, felt they had every right to be.

Liberty Star and Brass Eagle promised Black Jag they’d find Bottles and Cans and deliver them to the Platinum City Knights unharmed. The next night, however, it was the Prosecutor who happened upon the teenagers. They were riding around in what he assumed was a stolen car. When the two boys saw the hero coming at them they hit the gas and attempted to flee. But the Prosecutor gave chase and unleashed an electrical blast. The shock was meant to bring the car to a stop.

The car did stop, but not before exploding into flames…