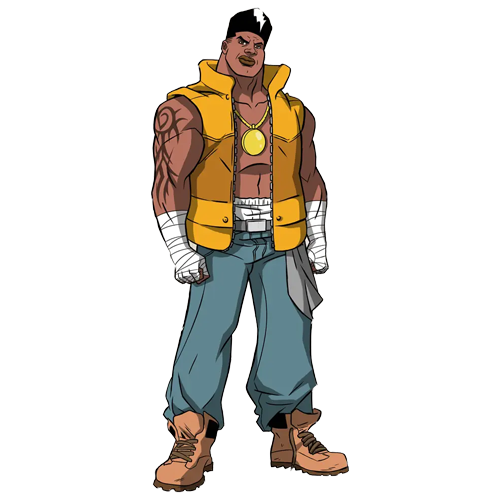 To understand why Travis “Blunt” Williams became the man he is today, you’ve got to look back a couple of generations at the men who came before him.

Travis’ grandfather, Lonnie Williams, owned a gym where he and his staff trained some of the best boxers and MMA fighters in Platinum City and from all over the country. His most talented boxer was his own son Lavar “Lightning” Williams who turned pro at the age of 18 and began his career with a streak of 13 straight knockout wins in the Light Heavyweight Division. He quickly worked his way up the rankings and was on the verge of breaking through to the big time – a number one contender’s bout against Carter “Thunder” Tunney. It was billed as “Thunder vs Lightning” and could have inevitably led to a title shot that would have provided a payday that should have set up the Williams family for at least the next 5 generations. But then it all came crashing down.

The owner of a rival gym, Gavin Hilton – whose top fighter had lost badly to Lightning – sent a group of goons to the Williams Gym late one night to burn it down. They were under the impression it was empty, but they didn’t know that Lavar was in the shower after a late-night workout. The fire quickly raged out of control! Lavar was able to escape the building with his life, but he was badly burned in several places on his body. He spent months in the hospital recovering. Furthermore, Hilton paid off an insurance agent to declare that the Williams Gym was burned down by Lonnie himself in an attempt to cash in on a policy. With the medical bills piling up and his livelihood literally lying in ashes, Lonnie went bankrupt. Lavar emerged from the hospital nearly three months after the fire, but his title aspirations were all but done. His father couldn’t and wouldn’t train him anymore, and even if he could, Lavar’s body had been ravaged by the incident. He never became champ.

The Williams family was forced to move from their middle-class condo to the King housing projects. Lavar became addicted to painkillers, which eventually led to harder and more illegal drugs. Both he and his father were broken men.

About 6 years after the fire, Travis was born. It was apparent from the very beginning that he was built to be a fighter. He was a big, strong kid and by the time he was 10 he was already able to fight back against his father who had become somewhat abusive.

By the time he was 15, Travis was running the streets with his friends and getting into all kinds of trouble. Those friends were the ones that gave him the nickname “Blunt.” It wasn’t long before some other guy in the neighborhood made the mistake of picking a fight with him. Blunt beat him within an inch of his life. He was arrested the next day and charged with assault and battery, and after a short trial, he was sentenced to 5 years in the Platinum City Correctional Facility.

While in prison, he began hitting the weights and exercising relentlessly. To his surprise, he found that his muscle strands were hyper-generating and his strength was increasing exponentially each day. In other words, he was a hyper-being! He kept this info to himself, for he had heard that hyper-beings in prison were usually experimented on. After five years of laying low and doing his time quietly, Blunt was released. Of course, no one would hire him for a regular job and hyper-beings weren’t permitted to fight professionally, so Blunt began competing in underground fight clubs. He easily won every time. But the money he made from the fights just wasn’t enough, especially since he had several younger siblings he had to provide for.

Blunt was now able to keep his little brothers and sisters well-fed and warm. His youngest brother, Deshawn, was beginning to show some true promise as a high school student. Deshawn’s best friend Khalil was also pretty good with the books. They hung out with each other so much that Blunt gave them the nicknames “Bottles and Cans.” He also tried to look out for them best he could and warned them against the traps and pitfalls of Platinum City. For the most part they listened, but from time to time they’d get into trouble. It was minor stuff though.

Then one day, Bottles and Cans had a run-in with the villainous Hysteria. She was organizing the biggest heist ever in which every bank in Platinum City would be robbed at the same time. But to pull it off, she was going to need an army. Using her mind-manipulation powers, she convinced Deshawn and Khalil to join her caper.

On the day of the Smash and Grab robbery crisis, Bottles and Cans successfully hit the bank they were assigned and got back to their neighborhood before getting apprehended by the police. A few days later, however, the police raided the King projects and the boys were forced to run. They drove east and crossed the tracks into the upper class Summercrest community. At that point, they were confronted by The Prosecutor, a member of the City Watch superhero squad. They attempted to flee, but the Prosecutor hit their car with an electrical blast causing it to explode in flames.

Deshawn Williams did not survive.

Blunt was furious, but other heroes like Black Jag and Night Bird of the Platinum City Knights convinced him not to take revenge and instead let the legal process run its course.

A few weeks later, The Prosecutor, aka Eli Stock, was arrested and tried in a court of law. The trial was contentious and controversial, but at the end of the day, Eli was exonerated. The incident was ruled an act of self-defense against a pair of juvenile delinquents that had taken part in the Smash and Grab crisis. Eli was free to go. But he wasn’t free from Blunt.

The enforcer of the Spliff Crew went to the Prosecutor’s house, busted down his door and went after him. The vigilante grabbed his shock pack and attempted to defend himself by unleashing an array of electrical blasts at the intruder, but it was no use. Blunt got his hands on his brother’s killer and began to exact his revenge in the form of a brutal beating. Moments later, Liberty Star, Brass Eagle and Black Jag showed up and tried to talk some sense into the brute. But he just wasn’t hearing it. They would have to take him down by force.

The battle was epic as Blunt was able to go toe-to-toe with three of Platinum City’s finest heroes. Eventually, however, he had to retreat.

But before leaving, he was sure to look Eli right in the eye and promise him that he’d have his revenge one way or another.