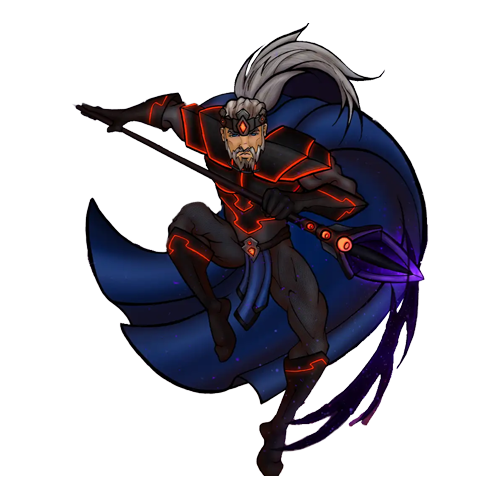 King Ka’Desh lives with an incredible amount of guilt and fear. He is the last surviving member of a super hero squad called the Diamond Alliance. But before that, he was the last survivor of the Planet Mederia, a world that was inhabited by a group of human settlers hundreds of years ago. He was born into royalty, and groomed as the prince of what was a beautiful place to live. The planet’s greatest resource was its “healing waters,” and much of the planet’s settlements were the equivalent of aquatic paradise – huge structures and buildings surrounded by rivers, waterfalls, aqueducts and more. It was like a futuristic Venice, except it was the size of a planet.

King Ka’Desh is a skilled hand-to-hand combatant, and possesses above average strength and speed. He wields the Mystic Spear of Mederia, which affords him a number of abilities, including flight, energy projection, and the ability to create teleportation portals.

When Ka’Desh was 21, his father passed away and he took over as King. His impact was immediate, as he ushered in an even more prosperous time for Mederia. He was able to figure out ways to synthesize the planet’s water into medicines, vaccines and other tools, that became useful throughout the galaxy. The leaders of several planets, including Earth, would come to King Ka’Desh to buy their products. Of course, there were others, who attempted to steal the resource as well. But very rarely did they succeed, as King Ka’Desh was a mighty warrior and defended the planet and its resources with a fierceness that was second to none. He wielded the Mystic Spear of Mederia, which afforded him a plethora of powers, including super strength, super speed, and flight. Using the spear, he was also able to cut open wormholes in mid-air and jump through them, allowing him to teleport from one place to another.

For a hundred years, King Ka’Desh (who used the healing waters to sustain his life, well after it should have ended), and his elite squad of Mederian Troops defended the beautiful planet and protected its people.

Until one day, a mysterious alien warrior, shrouded in a black cloak, arrived and landed on Mederia. The alien warrior, who never revealed his name, claimed that members of King Ka’Desh’s elite squad had trespassed on a forbidden planet in a nearby quadrant. In the process, they had disrespected the alien race this mysterious warrior represented.

Ka’Desh interrogated his Mederian troops and found this to be true. The mighty King offered his deepest apologies, but the alien warrior was not there for apologies – he was there for blood. He wanted the transgressors to pay for their disrespect with their lives.

King Ka’Desh, ever protective of his people, refused to give in to what he thought was an impractical request. The alien warrior was angered, and said his offer was now changed – he would only accept the life of the King, and if he refused, he would instead annihilate the entire planet of Mederia.

This, of course, prompted a battle. The King’s elite guard attacked the mysterious warrior, but they proved to be no match, as the alien wielded a powerful dark energy, which, along with giving him god-like strength, enabled him to manipulate matter and emit destructive concussive blasts of lightning. He easily laid waste to Ka’Desh’s squad, then engaged the King himself.

The showdown was epic and Ka’Desh fought with every ounce of strength and ability he had, but the alien’s dark energy was just too overpowering. The King was defeated, and the fate of the planet was sealed.

The alien’s dark energy began to envelop the planet, and the inhabitants of Mederia trembled in fear as they counted down the final moments of their lives. With the planet crumbling, and the death cries of his people filling the sky, King Ka’Desh did the unthinkable – he grabbed his Mystic Spear, used it to open a wormhole, and jumped through it, teleporting away from Mederia just as it, and the rest of his people, were wiped out of existence.

He eventually found himself on Earth, where he created a new identity as an old man named Henry Shufford, living reclusively in a rundown apartment in San Bernardino, California. For nearly a decade, he lived alone and in ultimate shame, as the events of the day his planet died played over and over in his mind. He had little need to eat or sleep, because decades of infusing his body with Mederian healing water had made him nearly immortal. He would sit up all day and night, watching news reports and reading Internet articles about the heroic exploits and dastardly deeds of other hyper-powered beings. But never did he ever desire to get out there and join the fray.

Then one day, the fray came to him. Sometime in the mid-21st century, a group of drug dealers moved into his apartment complex. But they weren’t only selling drugs; they were cultivating highly volatile blends of a synthetic narcotic known throughout the streets as Clean Slate, thusly named because it worked in a way that totally cleared your mind, and left it blank for a partner to suggest ideas and images to you, that would then become viscerally real before your eyes. It was a true brain trip, and for a time it was the absolute hottest thing going around.

Ka’Desh was content to let them do their thing, as long as they did not bother him. And for a few years, everything was peaceful. However, one night, a gunfight broke out, and in the chaos a batch of the synthetic blend was sparked – plasma fire engulfed the entire complex! The fire department, and even a few other hyper-humans who showed up, were helpless to stop the blaze. But one man was not helpless at all.

Ka’Desh grabbed his Mystic Spear and a portion of the stash of living water he had taken from his home world, and used his powers to extinguish the fire, and consequently bring an end to the drug epidemic in his neighborhood.

The story of Ka’Desh’s actions spread throughout the hyper-human community, and it wasn’t long before Magnifica, the leader of a superhero squad known as the Diamond Alliance, came to recruit him. He was reluctant to join the team at first, but the mighty heroine appealed to his noble nature and promised him that one of the priorities of the Diamond Alliance would be to find the mysterious alien who destroyed his planet and bring him to justice.

King Ka’Desh joined the team, and for a couple of years he, Magnifca, and the other four members of the Diamond Alliance saved Earth, and many other worlds from annihilation. But as is the case for any group of frontline troops, they would eventually suffer great loss, and after a few years of defending the galaxy, the Diamond Alliance was defeated and disbanded, with King Ka’Desh once again finding himself alone and hunted by powerful enemies.

He set out to find refuge in the farthest reaches of space. He wanted to get away from the constant fighting and fleeing; but he also wanted to get away from any other people, as it was clear to him that anyone who ever came to be associated with him would surely meet their demise. He eventually found a planetary system that seemed to be uninhabited by any intelligent beings. At the center of the system was a magnificently bright star, but the orbiting planets did not rotate, which meant portions of the various worlds were eternally shrouded in darkness. This was the perfect place for King Ka’Desh to live out the rest of his days in reclusive peace.

It had only been about month, before his planet was rocked by shockwaves. As he flew to the light side of the the world to investigate what was causing the earthquakes, he was startled to witness an epic battle raging between a duo of superheroes (Captain Noble and Shuttershock) and a horde of giant, monstrous creatures. The fight had apparently been going on for quite some time, as dozens of creature carcasses were piled up around the two battered and bloodied men. However, it was quite clear they were moments away from being overwhelmed.

King Ka’Desh watched for a long moment, then finally decided to fly in and help. But before he could intervene, another hyper-being, Fata Morgana appeared and created the illusion of a massive door in mid-air. Then with the snap of her fingers, the door opened, and a massive portal sucked Shuttershock, Captain Noble, Fata Morgana and her horde of creatures through, leaving Ka’Desh all alone.

As he looked around at the carnage surrounding him, something caught his eye. It was a small, glowing digital device. He grabbed it and activated it – a voice recording began to play… “My Name is Shane Williamson: Codename Captain Noble. Today marks my 11th year in service to the US government…”

Ka’Desh proceeded to listen to the entire recording, which amounts to a year’s worth of journal entries from the Hero of Heroes, Captain Noble, and how he’d been chasing down super-villains like Ramses Hondo and Attrition, and criminal masterminds like Fiasco and Sarcophagus; and how he formed alliance with an unsuspecting civilian named Byron Jones, who later became known as the superhero Shuttershock; and finally, he listened to Captain Noble’s account of the Trials of Harmony and how he came face to face with a powerful ethereal being called Hosho, who warned him of an impending doom.

It is that warning that finally caused King Ka’Desh to come out of hiding, even if it meant risking his own neck. He grabbed his mystic spear, cut a portal open and jumped through, with the goal of tracking down Captain Noble.