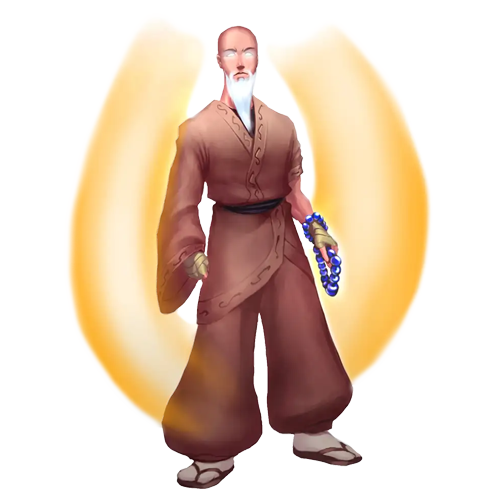 THE STORY
Shuttershock and I leaned against some jade pillars. We had won, but our bodies could not tell the difference. We were absolutely spent. He was reeling from the punishment the Zhibdean Triplets doled out, and I was completely battered. Our legs were weak and our energy was drained. Shuttershock’s power reservoir was all but depleted as well. Things looked bleak for us, and we knew it. We both tossed ideas back and forth on how to proceed. However, we were mentally exhausted and it was hard to think. Plus, we had no idea what was awaiting us next. Then the rock began to glow and another door was formed. It was time to move on.

Hosho can produce a sonic projection through his voice that registers at a god-tier level. His voice can also hypnotize massive groups of people at once. Additionally, eternal spiritual reincarnation gives him the gift of immortality.

The entrance before us was all gold. The inscription on it read “Nirvana is ruled by Hosho”. Underneath it were the monikers “Sang-gye”, “The Father of Dharma”, “The Voice of Buddha” and “Genunken Master”. Beneath this was another circular calendar rotating like a clock. Except this one did not display a number. Only a symbol: infinity. The immortal Zhibdean leader awaited us on the other side of the golden gate, a fact Shuttershock and I were very stressed about. Then, when I placed my hands on the doors to open them, Shuttershock raised his hand to stop me. He then said to me that if we did not make it, he was honored to have fought at my side. The threat of death was more real than it ever had been, so I returned the same sentiments as we walked into Hosho’s chamber. The doors closed behind us.

It was pitch black inside. We felt the presence of someone, but could not see them. After a moment, a voice emerged, saying my name. It was not audible, though. The voice was inside my head, yet, it did not belong to me. I inquired to Shuttershock if he heard something. He said he heard someone call his name inside his head as well. I knew not what sort of magic was at work. I yelled out for the person to show themselves and face us. My partner added we were ready. That was when we both instantly fell into a hypnotic trance under the sound of this individual’s voice.

Shuttershock and I saw visions of our previous battles with the Triplets. In them, we were thoroughly crushed by each one. We did not emerge victorious. Then, we saw a battle with Hosho. It did not end well, either. His speed, strength and agility were superior to the Triplets, and he embodied the fighting techniques of all three. We fought bravely, using a great strategy and technique, but we were felled. Both of us were slain. Another vision occurred next. It was another battle with Hosho; an alternative outcome. In it, both of us were blasted against the rock by his vocal powers. The strength of it was supersonic and it quickly ripped the flesh from our bodies, evaporated our muscles and shattered our bones. The third vision was of us being hypnotized. We stood motionless, paralyzed by choice, as Hosho commanded us to take swords lain before us and end our own lives, which we did by impaling our hearts with them. After this, we were let out of the trance, and before us was Hosho.

The chamber was enormous. It was a throne room with gold and jade everywhere. Hosho stood before a golden monument on a wide platform some steps above the ground. The entire floor beneath us was dark, polished wood. Down the middle of it leading from the door to the platform steps was a red velvet carpet. The material also covered the ground underneath where the throne was positioned. Along the sides of us were wooden pillars with gold fixtures. Inside them were jade torch handles housing flames. Weapons and art of ancient Tibet and the Far East adorned the walls, too. Behind Hosho and the throne was a giant tree. As gentle breezes passed through the chamber, we could hear leaves rustle. Then, the Zhibdean Triplets, Genko, Dairyu and Dainin, all appeared at Hosho’s side. Shuttershock and I had no idea what to expect. We were at a complete loss.

Hosho walked towards us. While doing so, he raised his hand. The top of the mountain above became transparent, and a strong beam of sunlight engulfed Shuttershock. The Genunken Master was replenishing my partner. Then, he waved his hand once more in my direction and a jade mist surrounded me before entering every open orifice of my body. I felt invigorated; better than I had ever felt before. I was not only completely healed physically, but I was also rejuvenated mentally, emotionally, and spiritually. Shuttershock received the same healing from the sunlight as well.

Hosho stood before us – his eyes completely white – and said: the thing which is most important above all is balance. He told us, from the dawn of time, harmony was the sole key to survival for everything in the entire universe. Hosho then informed us the Zhibdeans had been sleeping for thousands of years; since the last time the goddess appeared and balance existed on Earth. They had just awakened, and it was fate which brought me to the temple that day.

He said, the dark had infected our home from beyond, and that I needed to be ready, for if I failed to restore balance, the Zhibdeans would annihilate everything on the planet to finally avenge the Eternals, and cleanse the world so it could start a new. I asked him why he singled out just me, to which he replied my destiny was to be at the forefront. However, he also said the reason my companion was put through the Trial of Harmony, too, was because I must know beyond a shadow of a doubt that I cannot do it alone. It is imperative I invest my entire self in a soul bond with others, as I had with Shuttershock by forming a brotherhood.

Next, I inquired who “the goddess” was and who the Eternals were. But Hosho did not answer me that time. He merely expanded the beam of sunlight around both Shuttershock and I and said to be ready, as we were both teleported outside where we entered the Genunknen Temple.

The enormous building was gone. No entrance was before us as it was when we arrived. Shuttershock asked where it had gone and what it all meant. I answered the temple’s disappearance meant the Zhibdeans were giving us a chance to save our planet and everyone on it. He retorted that they can’t just kill everyone. That is when I reminded him of the story we first read when we entered the Genunken Garden. The Zhibdeans had wiped out innumerable people before, in order to restore balance to the world. If it meant they had to cause a global extinction, they would certainly do so. I also reminded him of the visions Hosho gave us. It was a warning. We may think we can fight back because we made it through the trials, but Hosho let us know that, in reality, we were at their mercy. We did not necessarily defeat them. We merely passed the test. I continued explaining to Shuttershock that if they desired to kill us, we most likely would have been dead in Genko’s chamber upon entering it. He knew my words held no fallacy. Then, after a moment of silence, he asked me what we should do, and what of our pursuit of Ramses Hondo. I told him that I suspect Ramses, Edgar Lockhart and several other recent adversaries and wild occurrences could very well be intertwined and connected to the ominous warnings Hosho had revealed to us. Either way, at that point it seemed clear that our planet was possibly facing something much more dangerous than an arms dealer. We needed to connect the dots.

And with that, Shuttershock and I took off and flew back to Washington D.C.