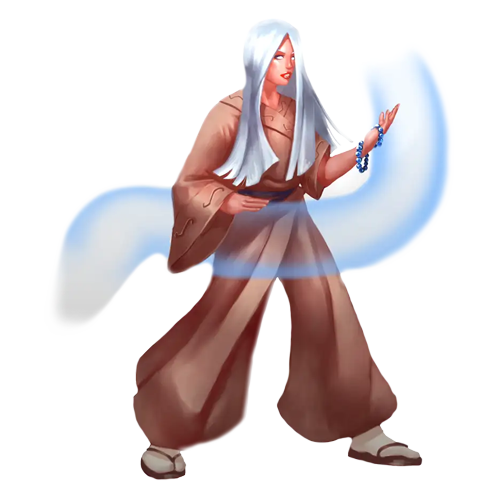 With the Attrition situation at CIA Headquarters under control back in the US, I was able to turn my attention back to tracking down Ramses Hondo. Thanks to Cosmo Cortez, Shuttershock and I now had a pretty good idea of where in Tibet to look. We found a temple at the end of a long, twisting trail inside the mountains. And I have to admit, it was a magnificent sight. Before us was an enormous Buddhist temple made of jade, gold and marble built into the mountain. It was an ancient structure, akin to something you would see in a Hollywood movie with a billion-dollar CGI budget. The engravings in the jade pillars beset on both sides of the golden doors had peculiar meanings. On the left, the engraving said in Tibetan script “The Dark Temple Genunken”. On the right, it said “Home of the Zhibdeans”. Neither of us knew what they meant. We couldn’t leave without investigating, though, so Shuttershock and I proceeded through the shimmering golden entrance.

Genko can produce a sonic projection through her voice at a super-strength level. Her voice can also induce fear in other beings.

Directly inside the doors was a large courtyard. It was a gorgeous sight. Flowers and plants bloomed amidst the perfect landscape, despite the sky above us being gray and freezing cold. Marble statues of monks and dragons stood at each corner. The clearest water I’d ever seen flowed in a creek that ran a course throughout the middle of the courtyard, without a single bit of ice in it. Along the boundary were paths of jade, which guided you through an ancient story unknown to the outside world. It stretched all the way around the courtyard, and ended right before the only other set of doors present. Shuttershock and I followed the jade path, and I read to him the story as it was written on the walls through captivating calligraphy and artwork.

The Zhibdeans are metahumans who are born into the secret, ancient, Tibetan Buddhist dark temple named Genunken. Since the dawn of time, the Zhibdeans have existed. Their lives can span thousands of years, with the leader of the Zhibdeans being eternal; a singular spirit constantly reincarnated into another chosen Tibetan monk, once their life expires. The other three Zhibdean members are always reborn as triplets to a chosen woman foretold to the leader by way of prophecy. The Zhibdean’s existence is unknown to all of the outside world, with the exception of chosen Tibetan monks in other temples.

As legend has it, the Zhibdeans are known to have mythical abilities through dual vocal chords that house enormous power. Their voices have been conditioned at the highest altitudes in the Himalayas since the beginning of time. Therefore, they have been developed into weapons of supernatural power and strength, which is passed down and exponentially increased every reincarnation. Their dual vocal chords also have a unique, secondary ability they can perform. These incredible powers were bestowed upon the Zhibdeans to keep harmony in the universe, both literally and figuratively.

They have taken the side of both good and evil over the millennia, as one cannot exist without the other. Thus, if one particular side begins to dominate, the Zhibdeans become agents of the opposite side, to bring balance to Earth, meaning they have taken the lives of both the righteous and the unrighteous. A fact that made Shuttershock and I very uneasy.

The visual story and scripture ended, as we had worked our way to the end of the jade path. After preparing ourselves for whatever could be on the other side of the inner marble doors, we pushed them open. Before us was a singular room, encased on all sides by rock. We began moving into the actual mountain itself. The room was dimly lit by torches hanging on the wall. In front of us was another set of marble doors, with a new story written on it. The script read “The Chamber of Fear is home to Genko”. Underneath this were the monikers “Zedsnan”, “Dark Radiance” and “Original Light”. Below them was what appeared to be a circular calendar, which rotated like a clock keeping time. It read “Year 949”. We both looked at each other in disbelief and hesitantly opened the doors.

A much larger room was inside. The floor was made of bamboo. The walls and ceiling were mountain rock, but they were perfectly shaped and smoothed out. Torches lit the entire area, revealing ancient Buddhist temple archways and designed structures. Incense permeated the air around us. There was a calm atmosphere in the room; a very zen feeling. Not wanting to be distracted, Shuttershock and I looked around right away. Alas, we could not find anything. Then, a faint voice crept into our ears from the shadows…

It was Genko! She had begun to use her vocal powers to strike fear into our hearts. Shuttershock immediately dropped to his knees, rambling something about watching his fiancée burn under the heat of a meteor crash. His eyes welled with tears and he shook uncontrollably. I myself began having visions, too. I witnessed death and destruction descend from the skies in the form of an unidentifiable, overwhelming power. It was on a global scale as men, women, children and the planet were massacred, while the core of the planet erupted, disintegrating our world entirely. I was paralyzed. The terror in my heart almost caused it to burst. I had never experienced any feeling close to that before. It was then that Genko walked up to me.

I sensed she planned to end my life. However, I refused to let her hypnotic trance cripple me any longer. Ever since I was a child, the only thing I hated more than failure was being afraid. Thus, the longer I was under Genko’s spell, the more enraged I became. So, I mustered all the bravery and courage I had left, combined it with the anger boiling inside of me, and overcame the visions. This allowed me to attack her.

I flew and tried to grab Genko, but she moved like the wind. I ended up grasping nothing but air. As I turned to face her again, she opened her mouth and blasted me into the rock wall with the force of her voice. I shook my head to clear the cobwebs and re-engaged. Her fighting style was similar to that of the Shaolin monks’ kung-fu, but with some pretty wild variations. My guess was, it predated the Shaolin Temple as the Zhibdean legend says they have existed forever. Nevertheless, her movements were swift, and each strike ended with a powerful snap. Genko moved like water – incredibly fluid. My punches and kicks, regardless of how hard I launched them, would gently roll off her arms or hands as she blocked and parried. Eventually, I would find an opening, but before I could land a strike, Genko would unleash her vocal powers and send me flying into the rock again.

For some time our fight went this way. I was able to land some blows, but Genko proved to be too much. Her kung-fu style was effective enough to immobilize my offensive, and her vocal power was wreaking havoc on my body. Luckily for me, Shuttershock came to my aid.

A powerful light blast emerged from the background and sent Genko flying into a marble pillar. Shuttershock had finally snapped out of her spell of fear. Genko stood, and as Shuttershock launched more light blasts at her, she began to fly at high speeds in avoidance of his attacks. Next, she moved in close to him, using her martial arts to land multiple punches. I quickly joined and intervened, grabbing Genko in an attempt to throw her into a rock wall. She rolled her body and reversed my grip, kicking me in the back of my knee, sending me to the ground. However, before she could land a crushing strike, Shuttershock nailed Genko with another light blast. He helped me off the ground and we advanced together.

For the remainder of the fight with Genko, we proceeded to work in tandem, because any time she was able to isolate one of us, we were clearly outmatched. It was no easy task, either, as she frequently sent us flying into the rock walls with her vocal power. We had to remain persistent, though, and we did. Thus, after a long, grueling fight, Shuttershock and I stole the momentum and subdued Genko. However, before we could get a hold of her, she transformed into mist and disappeared.

Shuttershock and I were breathing heavily and stood, sore from the damage we had just taken, unsure of what to expect next. The far wall began to shine bright and another marble doorway was created from the rock. We had emerged victorious, but there was no time to celebrate. Our journey into the Dark Temple of Genunken had just begun.