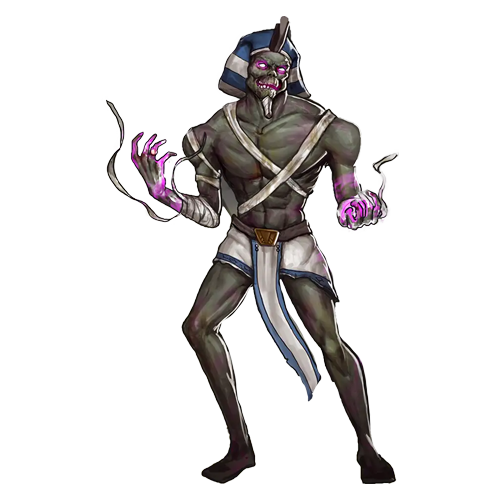 It has been a while since I recorded anything. I’ve been exhausted, to tell you the truth. After I was ensnared by Shefali‘s persuasion and manipulation tactics, which led me into an ambush party thrown in my honor by Jamad Musa and Qadira Azizi, I realized it is not safe for me to go anywhere. Ramses Hondo has turned the tables and is hunting for me now. Combine that with the fact that Cliché could pop up at any second and take me back to Sir Vellichor‘s Grand Library, and it is undeniably imperative we must devise a solid plan before moving forward.

Sarcophagus has the ability to reanimate corpses, creating zombies. He can control the actions of any zombie he creates. His telepathy has limited power over living beings as well. He also has enhanced strength and durability.

So it was decided by my superiors I should lay low, which was perfectly fine with me as I needed the rest. My desire for a vacation, however, ceased when I turned on the news today. I swear, if it isn’t one thing with Platinum City, it is always another.

I turned on the news after receiving a text from Shuttershock. And what did I see? Zombies. Real life (bleeping) zombies! Look, I apologize for the language. But just this year I’ve traveled our world and to other dimensions, fighting unicorn men, super villains, vampires inside of a mystical book, and I have been hunted in my own backyard, too. The craziness not only seems never ending, but it seems to be continually getting ramped up a notch. Zombies? Really, Platinum City??? Because a mini earthquake set off by an evil mastermind while hosting the world’s biggest arms dealer and alien mercenary, Ramses just wasn’t enough, I suppose. Good Lord! In any case, those were my initial thoughts upon seeing the news report, and I only grew more exasperated with the more I learned.

I instantly called my superiors. They told me to meet with them in General Hank Garrison’s office. After I arrived, they informed me the culprit behind the chaos in PC is a macabre terrorist with unknown origins, who goes by the name Sarcophagus. He has the ability to animate corpses and control them to do his bidding. I inquired why I had never heard of him before. They answered he first struck 15 years back in France, before I joined up. Sarcophagus went into the Catacombs and brought a half dozen dead bodies back to life that nobody knew were even buried deep within the walls. It was straight out of a horror show. Luckily for us, it was late during the winter on a freezing cold night, and nobody was around, besides a handful of security guards on duty. The zombies attacked but were put down pretty quickly. Apparently the guards were fans of the old, classic TV show “The Walking Dead”. They wasted no time shooting them all in the head. Sarcophagus, however, disappeared.

The guards reported the incident in detail to their superiors during the investigation which followed. It was immediately silenced by the French government, though. However, intel did happen to reach the CIA. I told them it looks like Sarcophagus has spent the last 15 years improving his abilities, because it wasn’t six zombies this time but six thousand!

And this particular disaster was born out of truly pure motive. They called it the “Green Fallen Initiative”. Two years ago, in order to bring more trees into the massive concrete jungle of Platinum City, Mayor Gemini DeLisi created a program that saw 6,000 trees planted within a 100 square mile radius. All of the trees were supplied by a company that uses burial pods encasing the bodies of the recently deceased as a way of facilitating growth. Each of the deceased was a resident from Platinum City. The mayor’s PR team spun it wonderfully, as the Green Fallen Initiative would ensure the spirit of the city never died. And not only that, but the fallen sons and daughters of the city would be continuously giving back life, even in death.

It was a beautiful sentiment and the people ate it up. And not only in PC – metropolises across the globe followed suit. Soon Chicago, New York LA, Beijing, London, Tokyo and Berlin all had programs of their own. All the major cities in the world eventually implemented a program. Everywhere, except for France. I asked my superiors why we didn’t follow their lead. Our government knew, as France’s did, that Sarcophagus could very well be planning another attack. Apparently, the company who supplied the burial pods is owned by none other than, you guessed it, Edgar Lockhart. Not even the US government has the desire to protest his business endeavors. Their main reason for not coming out publicly and sanctioning the deals is because the knowledge of Sarcophagus is classified information they received from long-time placed spies within French government agencies. They could not expose our undercover assets. Another reason, though, is also because Edgar’s economic influence is staggering. When he closed all of his French operations for their refusal to go with the burial pod initiative, their economy took a big hit. Not only did they lose the top half of their technology industry, but other countries also put a freeze on their economic ties with them. If Edgar could do that from thousands of miles away by placing a handful of phone calls, imagine what he could do while embedded in the heart of our country. It makes sense the US government would not get involved. It also makes me wonder more about Edgar’s business practices. Nevertheless, I digress.

The footage on the news was of mass hysteria. It was the middle of the day on Wednesday. The city was bustling and the streets were packed with civilians and commuters. And there was Sarcophagus, brooding, sinister and dark, leading droves of zombies and commanding them to bring death to all the living. The bloody carnage was almost too much to watch. Most people fought back, but there were simply too many zombies. The PCPF was out in full force, but they were limited in their ability to gun down the zombies with so many innocent people in the way. They were forced to get close to the dead and take them down, resulting in many of them being killed as well. The National Guard was called in, but they were having no better success than the police.

Then we saw all the heroes hit the scene. Black Jag and the Platinum City Knights were valiantly taking down zombies. Liberty Star and the City Watch were in action as well. Musashi was effortlessly killing zombies by the dozens, too. I pointed him out, along with all the rest, to my superiors, showing them how incredible these heroes are and how they could benefit our efforts immensely. Instead of a fast and sharp “absolutely not”, I received a slower but still firm “no”. I’m making progress, it seems.

Just then, I received a call from Shuttershock. He asked me if we were to head to Platinum City as the people could use our help. The general asked me to connect to his intercom system so they all could talk with their new asset. I linked my phone and he was on the speakers. They introduced themselves and said they were glad to have him on the team after recently finalizing the joint task effort with New Hero Hospital. Shuttershock replied he was happy to be on board to help, and wanted to know when he should meet me in Platinum City.

Our superiors, however, instructed him to stand down, saying I was inactive for the time being until further notice. I argued we needed to be in Platinum City, and for a few minutes, we went back and forth on the matter. Then, during the heated exchange, a news reporter was seen on TV being devoured by zombies live on camera. The room went silent, and then Shuttershock’s voice came in over the speakers. He gasped and then asked if we saw it. There was more silence. Then he simply said my name. I could tell in his voice he wanted to help the people of PC as much as I did and was begging for me to give him the green light. Our superiors looked at me with defiance in their eyes, as if to say I better stand down. I stared directly back at them while telling Shuttershock to go.

Instantly, we heard the hospital phone drop to the ground and a loud blast boom in the background. He was flying to Platinum City, and with that, I walked