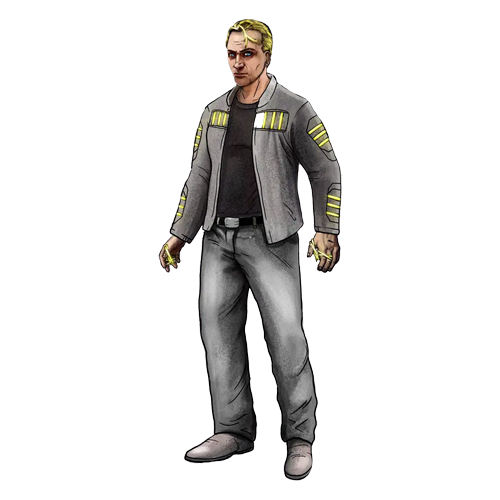 Tectonica and I stood, ready to fight. The air in the Library grew tense as Cliché continued to laugh. I wasn’t going to take any more of her cackling, and I sensed my giant friend felt the same way. Cliché was true to her word, though. She showed absolutely no interest in engaging us, or in even defending herself. That is when I realized her associate was the source of her arrogance and comfort. He appeared out of the shadows and stood beside his fellow Book Club member. I demanded the man tell us his name. He informed Tectonica and I that he was called Binder.

His attire was antiquated, donning a faded denim look of the early 20th century. I pondered if the man really could have been from hundreds of years ago, or if he was just a fanatic of the historical time period. Do not let his looks fool you, though. He is one of the most powerful members of Sir Vellichor’s court. Along with Cliché, whose super speed and ability to teleport make her a master tactician, we now had to deal with Binder, who possessed another extraordinary power. He informed us through his British accent that his job was to place us in the books, and keep us there. He also said if we were worthy, according to Sir Vellichor, he would help guide us to freedom. Tectonica quipped by asking Binder if he meant “help us” like he helped all the other people over the last 100 years, who didn’t make it out. He shared a laugh with Cliché before responding with a simple motion…

Binder possesses the ability to mystically transport people into the books of Sir Vellichor’s Library. He can also use telepathy to project his likeness into the books where he can communicate with the captors. His hyper abilities are limited to Sir Vellichor’s Grand Library. His jacket, however, contains energy bands that can be used to confine and restrain captors as well.

Energy engulfed his hands as he twirled them in a circular motion. A bright flash occurred, and before we could blink, Tectonica and I were standing in an open field.

It appeared we were somewhere in northwestern England. I turned to tell Tectonica this, and as I did, an apparition of Binder formed in front of us. He told me he was impressed with my ability to identify our location, as Tectonica moved her foot through the astral projection of Binder, in awe of the sight. He said my observation skills had earned us points with Sir Vellichor, and thus we were allowed to receive one clue.

I told him I wanted to speak with the master of the Library, but Binder informed us that the only way we got to see Sir Vellichor was if we successfully navigated our way out of the book. Then, Binder disappeared. I flew up to Tectonica’s eye level and told her to remain still. Next, I shot myself up into the sky and kept flying as fast as I could. However, when I broke the layer of clouds above us, I found myself standing right beside Tectonica again. I had flown into some sort of portal, it seemed, which transported me directly back to my starting position. Binder appeared before us, saying that we could not escape. If we were to “go out of bounds”, Cliché would simply teleport us back into the book every time. I slammed my fist into my palm, frustrated with being forced to participate in Sir Vellichor’s stupid game.

Binder simply laughed, then disappeared. Tectonica motioned for me to fly back up towards her. I did, and she informed me to remain in the air as she used her powers to try something. Soon, the entire world around us started to tremble. Everything shook uncontrollably. Then, the ground beneath us tore open, fast and wide. Tectonica continued to rip open the ground, and I flew down to follow her as she descended into the depths. However, just when I thought we may be making progress, she and I found ourselves standing in the middle of the same open field as before. Disappointment and anger are not even close to describing how we felt.

Binder reappeared, laughing. He riddled that what is up is down, down is up, left is right, and right is left; that we would never find our way out of the book thinking in conventional means. He also reassured us that between Cliché’s teleportation and his binding energy, we were never going to succeed at the pace we were going. He was obviously finding great amusement, as he laughed and vanished again.

I flew up to Tectonica’s shoulder and began surveying our surroundings. A few seconds later, she told me to look due west of us. On the horizon was a partially hollowed-out castle with no roof. It appeared to be filled with numerous staircases and doorways. We both agreed that is most likely were we needed to go. However, before we departed for it, I thought about Binder’s words with the directions being backwards. I told Tectonica we needed to travel east if we wanted to reach the castle west of us. She argued that I was crazy, as the castle was obviously due west. I reminded her of Binder’s riddle, yet she still was not convinced. So, I shot off and flew as fast as I could east. Eventually, I was teleported to the castle in the west and I waved to Tectonica from above our destination. She nodded her head and began running east, shaking the entire area. Soon after, she was also standing next to the castle with me. She inquired how I knew that would work. I told her that Binder’s riddles and clues revealed the book utilized Cliché’s portals to negate directions of travel, as it would only be natural for a captive person to try and find a way out before doing anything else. Naturally, they wanted us to lose our cool by continuing to try and flee, but repeatedly ending up back where we started. It was a clever trick by our captors, but not clever enough.

I then explained that when I thought about how I flew past the clouds and was returned to my starting point, and the same happened when Tectonica took us deep beneath the earth, Binder’s words alluded to the fact the same rules of opposites applied to following compass directions. Finally, I shamefully admitted that I possessed no clue as to what the castle had to do with everything.

As Tectonica was way too big to enter, I alone walked through the front gate. When I did, the sky began to circulate around us at alarming speeds. Then, the Moon appeared in the sky. It was enormous, and slowly a red coloring began creeping from one side of it to the other. That is when Binder appeared again. He told us that we had entered the final stage of the book. I was to go through the castle and navigate the staircases until I found the correct way to the top. However, for each incorrect doorway I crossed through, one of the kidnapped people from the town near Mt. Logan would be transformed into a bloodthirsty vampire! Furthermore, each transformation would cause the red to engulf the Moon even more and at a faster pace, eventually creating a Blood Moon. If I was still in the castle at that point, I would be overrun with vampires, and Tectonica would be stuck in the book forever! With that, Binder laughed and faded away once more.

Immediately, we looked up at the Moon. The red color was advancing rapidly, and I estimated I had a few minutes to make my way through the staircases. So, I began coursing through the castle, while Tectonica gave me direction from above as she could see the entire layout. But when I passed through the first doorway, I was taken to a parallel staircase, and right behind me was a vampire villager. Tectonica yelled for me to run, however, I could not risk making another wrong turn and creating another monster. And it was blatantly apparent that the villager was not going to stop until they drained me of my blood. Thus, I was forced to put them down with one quick, devastating punch. I yelled at Tectonica to remember there were portals behind each door and the directions were reversed.

She readjusted her directions, and the next dozen doorways passed through were correctly done! Then, with mere seconds left, I approached what seemed to be the final door. However, I should have known things were not going to be that easy, for between me and the exit was a mob of vampire villagers running at incredible speed towards me. I launched myself through the crowd as the monsters clawed at my skin, attempted to bite me and grabbed at my cape!

Their sharp nails scratched me to a bloody mess and shredded my attire, but I eventually made it to the end of the hallway! However, after I passed through the doorway and floated above the castle in the air, it completely collapsed, burying all of the monsters. I breathed heavily from exhaustion while I bled and looked at the distraught face of Tectonica. She was relieved I made it out alive, as was I, however, we were both saddened by the loss of life.

Then a bright flash occurred as energy surrounded us. And suddenly we were returned to the center of the Library. We were immediately greeted by enthusiastic clapping.

It was Sir Vellichor. He was holding a mystical book which was glowing with energy and dripping with blood. It was obviously the book we had just survived. The master of the library smiled with extreme delight and thanked us profusely for the show we’d just put on for him. Needless to say, I was not about to take a bow…