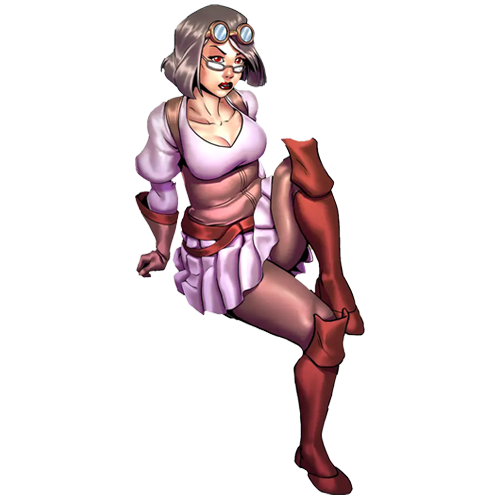 America has always been a nation of immigrants and as such it is a staple of several major cities to have large ethnic populations concentrated in certain areas. These locations are usually heavily imbued with the culture, languages and traditions of the homeland of that particular group of people. New York had Spanish Harlem and Chinatown, while Los Angeles had Little Tokyo, just to name a few. Well, Platinum City was no different. As it continued to grow into the largest city in the world, it also developed communities filled with the principles, beliefs and practices of a number of foreign lands. Among the largest and most influential of these cultural hotspots in Platinum City was New Japan.

Deleria has the ability to sense the powers and power-levels of other hyper beings. She also has the metaphysical ability to absorb super powers used against her, making her invulnerable to a wide range of attacks, including displays of super strength, energy blasts and telepathic manipulation. She is NOT immune to natural human attacks, such as kicks and punches, or physical weapons like firearms and blades. Deleria is also incredibly intelligent, especially in the area of biochemical engineering.

Just like Platinum City itself, New Japan had begun as a small settlement. During the years immediately following the Great Quake of 2016 that produced the massive chasm in and on which PC stood, a group of Japanese American families set up a small community on one of the abandoned bridges that linked the east side of the country to the west side. More and more Japanese Americans heard about this settlement and by 2020 it had become a community of nearly ten thousand people. One of the earliest families to relocate to the area was the Hashimoto family. As a boy, Hajime Hashimoto witnessed firsthand how Platinum City, and subsequently New Japan, grew into meccas of metropolitan majesty.

Hajime Hashimoto’s granddaughter, Kamiko Hashimoto, was born nearly 75 years after the Great Quake and in those years New Japan had actually grown so much that it was now literally more populated than the islands of Japan itself.

Kamiko was brilliant. She began reading at the age of four, and due to the fact that her mother was a biochemist, she was often found flipping through the pages of some pretty heady stuff. Her parents thought it was amusing to hear her reciting complicated equations from chapters of old textbooks. But at the age of 9 it was no longer a laughing matter as they realized she fully understood what she was reading. She was making connections and considering new possibilities. When her mother would tell her father about a problem she was having at the lab, Kamiko would offer solutions – viable solutions. Kamiko was a little genius, which should have been a true blessing. But it ended up being a terrible curse.

Kamiko was kidnapped by a team of bio-genetic engineers who were attempting to create the perfect human. She was locked in a room with 20 other brilliant children who were all gifted in different ways. They were held there for several days until it was time to perform the experiment. The kids were strapped to operating tables and kept awake as the team of engineers performed a metaphysical procedure that extracted their conscious minds from their bodies.

The 21 minds were then infused into a single living cell. In a matter of weeks, that cell had grown and transformed into a hyper-human being who would come to be known as Virtuosa. Virtuosa would go on to eventually break away from the villianous scientists and forge her way as a hero in her own right, however, the children from which she was birthed was tragic to say the least. The children all survived the procedure, but they were left catatonic – they could no longer speak or move on their own. They no longer possessed any significant brain function.

Worse yet, most of them were mysteriously delivered back to their parents, leaving their families to wonder what terrible thing had been done to their formerly brilliant and articulate children.

Kamiko’s parents stayed by her bedside for the next 4 years and watched as she laid there looking straight up at the ceiling, but never moving and never blinking. Then one day, something extraordinary happened – Kamiko’s consciousness began to reform. She started speaking and trying to move and it seemed as though a miracle had happened. But just like before, this great discovery would soon become a nightmare. As Kamiko regained use of her limbs and mind, she also became spiteful and angry.

She lashed out at her parents and anyone else that cared for her before running away at the age of 16. At the age of 18 she began to plot her revenge against the bio-engineers. She was, however, only able to find one of them, Dr. Henry Blakefield. She spied on him, attempting to put together a plan that would get her in the position to poison him. But Henry soon figured out he was being targeted and hired someone to nullify Kamiko’s threat – a hyper-human madwoman named Hysteria.

Hysteria, who was only a teenager herself at the time, tracked down Kamiko and attempted to use her mind manipulation powers on the vengeful young lady. But it didn’t work. For the first time, Hysteria’s abilities were nullified. That’s when Kamiko discovered she had powers of her own – mainly, the metaphysical ability to nullify or absorb the effects from the hyper-powers of other hyper-beings.

This intrigued Hysteria. So instead of completing the job she had been hired to do, she recruited the young lady, rechristened her with the name “Deleria” and along with the supervillain Kray Kray, formed a group called “The Disturbed.”

The Disturbed’s first mission as a team was to make Henry pay for what he’d done. By the time they were finished with him it was clear that Dr. Blakefield would never practice anything ever again.

Deleria became the team’s resident mad-scientist. She developed poisons to use against their enemies and hyper-serums to use on themselves. She also enhanced their tactical gear and weapons. And of course she designed and built the tricked-out purple tank the trio used for robbing banks and all kinds of other mischief.