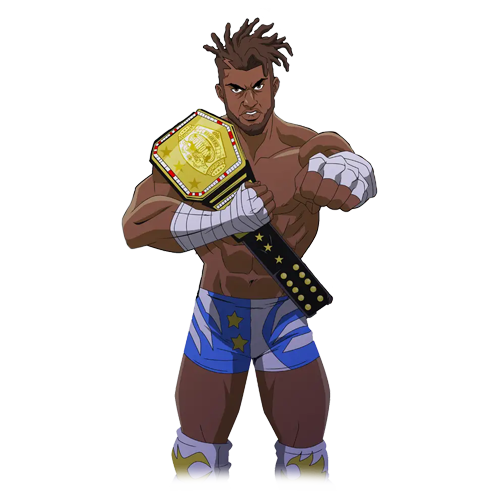 When it was announced that Super Pro Global Wrestling was holding an international search for amatuer talents to join their roster, Ronnie Jones could barely contain himself. He was working at a Home Depot in Rancho Cucamonga, California at the time, but he made it a priority to exercise every day and keep himself in pretty good shape. He had always had a desire to get into pro wrestling, but he could never afford to actually enroll in a legitimate wrestling academy or training program.

The Super Pro Tryouts would be an amazing opportunity, because the 50 semi-finalists would be flown out to Global Wrestling Academy in Platinum City and put through a week-long training program. Then the twelve finalists would be moved into a big house together and become part of a four-month reality television competition, in which the winner would be guaranteed a contract with SPGW. All traveling and lodging expenses would be paid for, and furthermore, if he made it onto that reality show, he would receive a weekly stipend.

He just had to upload a 60-second video to SPGWrestling.com showing and explaining why he should be given a shot. But it couldn’t be just any video with him flexing his muscles and talking about his passion for pro wrestling. It had to be something that would stand out and get him noticed amongst the thousands of videos that would surely be submitted. He realized that this was not simply a tryout tape to become a wrestler, but also an audition for the reality show. So during his video, he pitched himself as “The Ultimate Drama King,” and explained that not only did he have the potential to become the greatest wrestler on the planet, but he was also looking forward to making life crazy in the Super Pro Super House.

It worked! When the semi-finalists were announced, Ronnie Jones was on the list. A few days later he received his conformation in the mail and a few weeks later he was on a plane to Platinum City. He breezed through the week-long session and was chosen to become part of the house cast, where he kept his promise and proceeded to bring the drama!

He quickly became a fan favorite. His natural charisma and athletic prowess, along with his innate ability to learn ring techniques, were all leaps and bounds above the other competitors. After two months of competition and ten episodes of reality show shenanigans, eight of the other wannabe wrestlers had been eliminated and sent home. Ronnie, however, was still there and favored to win the contract. But it was not to be, as he would end up straining a quad muscle, which would force him to withdraw from the competition.

It was a devastating blow, but the Vice President of SPGW himself came to see Ronnie and encouraged him to keep pursuing the dream. They offered to pay for his rehab and told him that when he was ready, he’d receive a tryout. It took a few months to recover, but once he was back on his feet, he used the money he’d earned from the competition and moved to the midwest where he joined a small-time company called Ohio Extreme Wrestling. He excelled, of course, becoming one of the top performers.

Just a little while later, Alexis DeVille arrived in OEW. She was an incredible talent and, within no time, cemented herself as the company’s headlining female wrestler. Additionally, Ronnie and Alexis hit it off and began dating in real life. They also created a storyline for OEW in which the two of them came together to lead a group of young talented wrestlers called the Platinum City Roughnecks. They won all of the OEW titles and headlined pretty much every show for nearly a year.

It wasn’t long before the SPGW scouts took notice of the work Ronnie and Alexis were doing. They would soon be getting contract offers. But before any of that was to happen, the two lovebirds were scheduled to get married. The weekend before the wedding, Alexis flew to Las Vegas to meet up with her friends, Crystal, Kharma, Rivcah, Tiffany and Ja’Nique, for a bachelorette party. On the day she was to return, however, Ronnie received a crazy call from his future bride.

She and her friends had been dosed with a hyper-serum and gained superpowers. Furthermore, they had formed a team called the Sista Clique and were now involved in a war of attrition against evil business tycoons Edgar Lockhart, Reina Valencia and Ray Carnel, as well as the army of hyper-villains they employed. She promised him that once the bad guys were defeated, she would return to him and they would get married as promised.

For six months, he followed the progress of the Sista Clique through news outlets like PowerHouseNightly.com. He read reports on their battles with the Blue Zone Killers, Blindspot and Mania!. He wanted to help, but he was powerless. That is until he received an unexpected visit from Victor Carnel.

Victor was in Vegas on the weekend the ladies received their powers. In fact, it was his hyper-serum that the ladies accidentally drank. He was attempting to hide it from his brother, Ray, and the other evil business tycoons, when he dumped it into a bottle of champagne that consequently ended up being served to Alexis and her friends. Vic explained all of this to Ronnie.

Then suddenly, there was a noise outside the house. His fiancee, Alexis (aka Girl Six) had apparently returned home, but was locked in battle with a pair of super-villains, Zipporah Zing and Swinn Swift. Ronnie wanted to help, but Vic told him his human strength would be futile against the speed-demons. Ronnie then asked if Vic could whip up a serum for him to use. The scientist didn’t want to, but it was clear that Girl Six would meet her demise if someone didn’t step in. So Vic opened up his bag of elements and substances, grabbed a few household chemicals, mixed them together and dosed the wrestler with a hyper-serum.

It took a few minutes, but Ronnie soon began to scream and writhe in pain as his body reacted to the serum and his anatomy morphed. When it was all said and done, Ronnie “Torpedo” Jones had super speed. He immediately jumped in to help out his fiancee and was able to fight off Zing and Swift.

They brought Girl Six into the house and Vic used his bag of potions to heal the severely injured heroine. She then explained to them that several other members of the Clique were also badly hurt and that the team’s leader, Kharma, had been kidnapped. It would take a miracle for them to win against the villains now. Ronnie suggested that they had a whole collection of miracles – referring to Vic and his bag of tricks.

They flew back out to California and returned to the home of Crystal (aka Cybernetica) and Jimmy Spears, where the injured heroines were hanging out. Vic immediately went to work and in no time, the Sista Clique was healed and back to full strength.

Cybernetica, Girl Six, Madam Deadhead and Ember Brook, along with Torpedo Jones, regrouped and prepared to go after the villains who had their friend. Vic equipped the ladies with a few more helpful tools, including a few tips on how to neutralize some of the hyper-villains they would surely encounter.

When they arrived at the World Headquarters of Universal Intelligence (the tech company that doubled as a secretly evil cooperation), they were indeed greeted by a plethora of adversaries: Shanga, Mania!, Jessica Dash, Courtney Quick, Blindspot, RC Allen, Chaos Kao Kwan, Slasher Vinnatori, Diabla Diaz, The Annihilator, Zipporah Zing and Swinn Swift.

Torpedo Jones now realized what he had gotten himself into. He was second-guessing his decision to get involved; however, he was not one to back down from a challenge. So he took a breath and exchanged cautiously confident looks with the ladies by his side, before powering up and charging into battle!