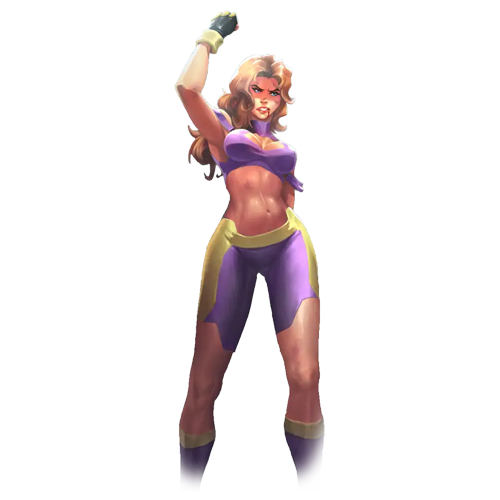 On her first day as a super-villain, Mania! nearly destroyed a team of super-ladies known as the Sista Clique. Cybernetica, Girl Six, Kharma Lucky, Madam Deadhead and Ember Brook had tracked down the mad scientist, DeMarco Scienza because he potentially held the key to destroying the multinational evil conglomerate, Universal Intelligence. They found his secret lab and were prepared to beat some answers out of him, when suddenly Scienza opened a chamber and unleashed Mania!.

The crazed super villain leaped into action, immediately taking down Kharma with a superman punch to the head! The thunderous Madam Deadhead jumped in and threw a fist, but Mania! caught it, then cracked the heroine in the face, breaking her nose and sending her reeling. Ember Brook unleashed a blast of fire, but Mania!’s skin was impervious; she yanked the flying flamethrower out of the sky and slammed her to the ground! Cybernetica tried to engage her next, but Mania! caught her in a bearhug and squeezed until several of the heroine’s cybernetic components began to rupture. The villain dropped the half-robotic woman to the floor, then turned her attention toward Girl Six. These two had a history with each other.

Mania! has been infused with hyper-chromosomes, the result of which has given her enhanced strength, speed, durability and agility. She has also no fear of pain and no sense of empathy and generally lacks control of her own madness.

But long before Mania! was a berserking super-villain, she was just a little girl from Mobile, Alabama with a dream of seeing her name in lights…

From the time she could walk, Heidi Leigh wanted to be a professional wrestler. Every Monday Night her mom, dad, two brothers and four sisters would gather around the television to watch the internationally broadcasted Monday Night Melee. On Tuesday, it was the smaller, but equally as popular, Hour of Action; when Wednesday came around it was time for Warbound Wednesday, which Heidi and her siblings would watch at a neighbor’s house (because they couldn’t afford the cable super-bundle that included the channel); on Thursday they gathered around their old laptop and pulled up a live feed of Vanity Pro Throwdown with the most vicious ladies of wrestling on the planet; and on Friday it was the Friday Night Fracas on the public access channel.

On Saturdays, if there was a local wrestling show going on at a high school gym or a community center, Heidi’s family was in attendance. And on Sunday’s they rested. Well, they rested from watching wrestling, and instead got out in the backyard and did the wrestling themselves! By the time she was 10, Heidi was participating in backyard wrestling matches with her brothers, sisters and a few older kids from around the block. They would come up with storylines, and schedule matches and then mimic the moves they saw on television.

Heidi was the next to youngest of her siblings, but she was the bravest by far. She didn’t mind throwing her body all around the backyard, despite the fact they were only using old mattresses that barely provided the requisite padding. She would be the first to volunteer for “hardcore” matches, where they would use old furniture and broken pieces of wood as “weapons.” And she was the only member of their little wrestling company with enough guts to climb to the roof of the garage and leap off for amazing “high-risk” maneuvers.

She earned the name Hardcore Heidi Leigh and at the age of 13 she had become a minor internet sensation, as one of her sisters began posting videos of their matches online. That sister, however, would grow tired of wrestling and take an interest in film. In fact, all of Heidi’s sisters and brothers, and most of her friends, would eventually find their niches in other, more conventional activities.

But not Heidi – she was determined to be a wrestler. As she entered high school, she continued to work out and make wrestling videos with her friend, Corrine Lattimore. They spent the money they earned from after school jobs on materials needed to build a ring with better padding. And they spent all their free time perfecting their skills in Heidi’ backyard.

Despite their own love for wrestling, Heidi’s parents urged her to try other things. They knew the chances of her being able to make a sustainable living as a pro-wrestler were quite slim. Coming from a poor background themselves, they wanted their children to have much better lives. Plus, Heidi’s myriad of minor injuries were piling up and beginning to put a real strain on the public healthcare assistance they received. A caseworker for her family had visited their home and informed them that if they continued to allow Heidi to participate in wrestling matches in their backyard, they could risk losing all medical coverage. Which, of course, would be terrible due to a number of chronic ailments her parents were dealing with.

So her father made a tough decision and one day in the spring of her junior year of High School, Heidi came home to find that all of her wrestling gear was gone. The ring in their backyard had been torn down and the pieces had been packed up in a truck and sent away. Furthermore, Corinne, who was a senior, had been accepted into Platinum City University and was beginning to turn her focus away from wrestling.

Heidi was crushed. That night, after a huge argument with her parents, she ran away. She would never see her mom and dad again. She hitchhiked her way up to Kentucky and eventually enrolled in a wrestling school, run by a small-time company called Ohio Extreme Wrestling. She actually couldn’t afford the school’s tuition, but she pleaded with Paul Diavari, the owner and promoter, to let her earn her keep in other ways. He agreed and Heidi became the facility’s cleaning woman, laundry room attendant and head of maintenance.

It was miserable work – large portions of the facility were in disrepair and the other wrestlers didn’t respect her much at all. She slept on the floor of the locker room for the first few months before eventually moving to the floor of the apartment of one of the older female wrestlers at the school.

This lasted for a year until Paul finally gave into Heidi’s pleading and began seriously training her. It didn’t take long for him to realize he had a superstar in the making. At the age of 19 her skills were beyond the vast majority of wrestlers he’d had on his roster for the past decade. She continued working hard, and eventually Paul began booking her in matches for the OEW’s live shows. The audiences loved her. But it was the arrival of a new girl, Alexis DeVille, that took both Heidi and OEW to the next level!

Alexis was a mind-blowingly impressive performer and it wasn’t long before she and Heidi became close friends. But instead of forming a tag team, the two of them decided to position themselves as rivals in the ring and subsequently began putting on incredible matches together. They would spend nearly every spare moment working with each other to come up with new ways to impress the audiences, and it was all paying off as the OEW crowds were growing every week! People came from miles away to see Alexis vs. Heidi and Paul’s company was making more money than ever. Furthermore, the CEO and head talent agent from Monday Night Melee was beginning to show interest. OEW was officially on the map and it was all due to Alexis and Heidi.

But then, things took a turn. During one of their main event matches, Alexis and Heidi were attempting a sequence of intricate maneuvers on one another, when suddenly Alexis slipped! The two women landed awkwardly. Alexis suffered a broken finger, but Heidi tore every ligament in her left knee. She would need surgery and would have to sit out for at least 6-8 months.

Heidi asked Alexis to also take a break from wrestling so that the two of them could return together and make a huge impact. At first Alexis agreed. But after just a week, thanks to the urging of Paul, Alexis went back into the ring and subsequently went on to become a bigger star than before. Monday Night Melee was preparing to offer her a big contract. This crushed Heidi and she grew spiteful and jealous of Alexis. The friendship was over.

To make matters worse, Heidi’s injury was not healing properly. Her rehab was taking longer than expected and she was dealing with severe pain in several parts of her knee. The trainers were beginning to suspect that she would never wrestle again.

Heidi then heard that Alexis had gone away for a bachelorette party in Las Vegas with her old college friends. A few weeks later, she read an article on PowerHouseNightly.com that Alexis and her crew had been dosed with a hyper-serum, gained super powers and formed a team called the Sista Clique! For the next few months Heidi followed the progress of the Clique as they traveled throughout the world, battling all kinds of super-villains, and apparently trying to take down some anonymous evil cooperation.

Well, coincidentally enough, that evil corporation sent a representative to speak with Heidi. His name was Simon Charles. He informed the grappler that the company he worked for, Universal Intelligence, was concerned the Sista Clique was targeting them unfairly. He also told her they had attempted to protect themselves against the super-powered ladies, but their defenses were beginning wear thin. And finally, he informed Heidi that through his research he had learned of her friendship and subsequent fallout with Alexis, and wanted to offer her the opportunity to exact a little revenge on the woman who put her career at risk.

Heidi’s knee was not getting any better, and Simon sweetened the deal with the promise that the doctors at Universal intelligence could not only heal her but give her hyper abilities. She agreed to do it.

Simon introduced her to Dr. DeMarco Scienza, who was the world’s foremost leader in Human Artificial Chromosome development. He proceeded to infuse Heidi’s DNA with hyper-chromosomes, and by the time he was finished, the former grappler had developed a multitude of extreme hyper-abilities. But her greatest asset was not the enhanced strength and speed; nor was it the nearly invincible skin or the super-natural reflexes. It was the berserker gene! She no longer had fear of pain or death; she no longer had a shred of empathy or sense of control over her anger, resentment and hate. She was no longer Heidi Leigh. She was Mania!.

And she was absolutely laying waste to the SIsta Clique.

DeMarco Scienza was able to escape the lab, but his problems were far from over, as the superheroine Virtuosa was also on the scene. She gave chase.

Meanwhile, Alexis and Heidi rekindled their rivalry in an epic way as Girl Six used her multiplicity hyper ability to counteract Mania!’s strength, speed and general craziness. The fight was brutal and bloody, but eventually, the rest of the Sista Clique was able to recover and together, they wrestled Mania! back into her chamber and locked her inside. Whew!

The Sista Clique searched the lab for more clues on how they could bring down Universal Intelligence. Since a previous full frontal assault had failed, they would need to ascertain an alternate method. They finally found a technical layout of UI headquarters and discovered a series of underground labs connected by tunnels. They put a plan together, prepared for battle and left the lab.

Mania! could only scream in rage and watch as, once again, her rival went on to do bigger and better things.