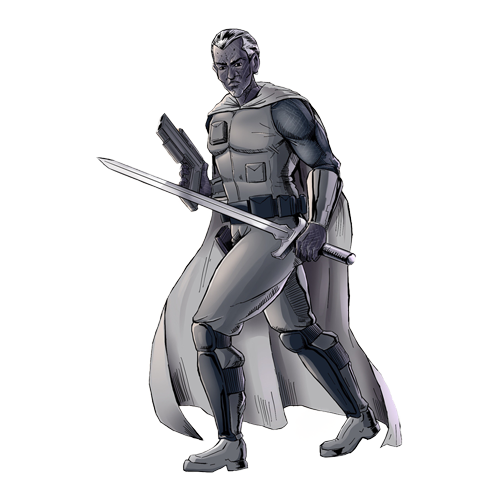 As General Tixus Trexion considered whom to bring with him to touch down on Earth’s surface during the impending battle against Kako and the Tromokratesian army, the first person he thought to recruit was the great warrior, leader, and his good friend Lieutenant General Creexus Ioia. Tixus had been a mentor to Creexus for a long time, and the two bonded through that, as well as through Creexus’s origins. He hailed from Exousia in the Geitonas System, a place Tixus visited as a child and the star system that welcomed him in when he was shipped off of his home planet, Spiti, during the Tromokratesian invasion. Tixus knew the Exousian people and culture well. He knew they were loyal, fierce warriors, and that having one under his command as a leader would be a great addition to the GKF. Therefore, once Tixus was named general and had a lieutenant position to fill, he immediately went to find a superior, qualified Exousian soldier. Creexus was that man.

Creexus was stationed on another starship when Tixus gave him the call. Without question, Creexus accepted the mission and began preparing to depart with his general and mentor. Creexus had always waited for a chance to take down theleader of one of the greatest enemies of the Sympan Treaty of Galaxies. He also knew what Kako had done to Tixus’s parents, and would not turn down the opportunity to help his close friend exact his revenge.

As Creexus dressed for combat and armed himself with his GKF sword, blaster and gravitron bands, he, too, thought about how his life had led him to that moment. There were times he thought he was not going to make it, and there were times he thought he was done with living life as an officer. However, each time he always came through the other side with a greater resolve to serve the GKF than he had before. Indeed, it had been a long and trying road, but Creexus was resilient.

He was born in the Geitonas System 265 years before that moment as an Exousian; they were a humanoid species, with gray skin that had metallic particle strands finely woven into their flesh on the cutaneous exterior, giving them a faint refractory, shiny complexion. This made the Exousians more durable, allowing them to take a higher amount of damage. In addition, due to this particular trait, his kind was known to be very aggressive, as they do not have to concern themselves with defense or self-preservation as much as other species.
Their culture was one of strength, where the most powerful were heralded, and weakness was highly frowned upon. As such, a military rule had been in place on their planet for millennia. Exousians were born and bred warriors, and so Creexus was a great example of that. Yet, their high level of intelligence and booming natural resource economy within the Sympan Treaty of Galaxies also made them a sophisticated race and planet.

Part of why Creexus’ life was so trying was the fact that while growing up on Exousia, Creexus’s family was impoverished. He hailed from a long line of infantry soldiers, a job that came with a high casualty and injury rate. Alas, both of his parents were injured in battle beyond recovery. They received honorable discharges, but since they could no longer be of service to the military, they both went to work for a miningcompany, digging for a rare and valuable resource located throughout the universe; it was the element used in the GKF swords as well as other weapons, and it was called electronium. Thus, the mining job was a vital one, as it helped supply an imperative part of GKF weaponry, however, the military status Creexus’s parents obtained did not amount to much monetarily. It only mattered in the respect department. Consequently, Creexus and his 7 older siblings grew up poor.

Even though they did not have much,Creexus’s parents made sure their kids did not go without. They always provided them with food, clothes and a roof over their heads, in addition to imparting invaluable wisdom about life and the universe. Another thing Creexus’s parents gave him was exceptional training in the art of war. They taught Creexus and his siblings how to fight, strategize and survive. Therefore, when they were all of age, they enlisted and joined the Exousian military ranks. The children suffered from the same fate as their ancestors, though, as all were either killed or severely injured in battle, and they, too, ended up in the mines; all but Creexus.

Once enlisted, Creexus refused to become another family statistic. He fought harder, studied more, and dedicated himself to the life of a warrior greater than any of his peers. Consequently, when alien terrorists who’d separated from the Sympan Treaty of Galaxies would strike and the GKF would command Exousia supply troops, Creexus was ready. He excelled in battle. The more perilous the situation, the more he thrived. This fact enabled him to rise through the Exousian ranks, quickly becoming a squad leader. From there, he became a lieutenant, and when his name was being considered for the position of general of the Exousian militia after decades of service, he landed on Tixus’s radar. It was not long before the GKF general plucked Creexus from the crop and took him under his wing. This was how Creexus and Tixus grew close, not only as mentor and protege, but as friends.

Creexus went on to assume the position of lieutenant general in the GKF – a huge promotion from the Exousian army – and became one of the finest leaders in the entire galaxy. His family beamed with pride, and in not forgetting about them, he appointed his parents and siblings as overseers in the mines his battalions purchased their minerals from for their weapons, restoring status and financial welfare to his family. In return, Creexus was ensured he was getting the best electronium by working with the people he trusted most, a gesture that spoke true to the extremely dedicated and loyal heart he possessed. The rest was history.

Creexus contemplated all of this as he walked through the GKF starship on his way to accompany General Tixus to Earth’s surface. He quickly stopped to tell his second in command that he was in charge of the units until he returned, and if he did not return, he was to lead the units into battle. Creexus’s right hand did not know what to think, as he had never been tasked with such a great responsibility before, but he accepted the job nonetheless. Finally, Creexus left to board a transport ship, so he could meet General Tixus on his flagship before departing to Earth.