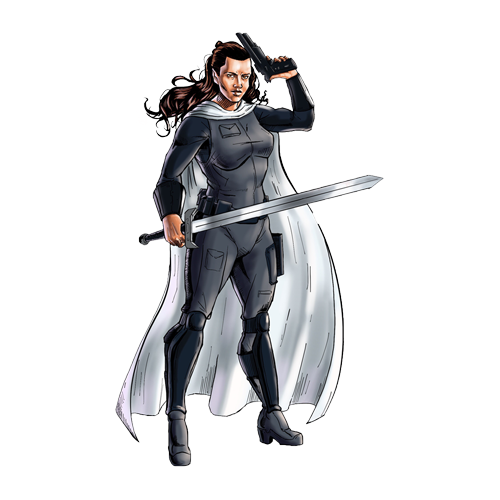 As General Tixus Trexion replayed this story in his mind, – one his parents had told him numerous times – his thoughts immediately shifted to his mother. She was a phenomenal woman, mother and soldier. His whole life, she was just as instrumental in helping him develop his military acumen as his father, Sirvia was. Thus, he could not help but remember his mother before he set out to round up the soldiers he wanted to accompany him to Earth for the impending battle against Emperor Kako and his army.

Lisya Aeronia was born on Spiti in the Igetis System during the 13th century, to a politician father and doctor mother. She was brought up in a way that allowed her to decide which of her parents’ path she wanted to follow. However, neither politics nor medicine intrigued Lisya. Combat did. She was obsessed with it. Lisya spent an innumerable amount of hours training in hand-to-hand combat. She studied martial styles, she learned the art of sword fighting, and she was a big fan of history. She studied all the battles in Spitian history, both domestic and inter-planetary. She also researched battle strategy. It was apparent Lisya wanted to climb through the ranks and join the Galaxias Klykos Force. Her parents had other plans, though.

When Lisya was old enough and finished with primary school, she wanted to join a junior military academy. Her mother and father planned to send her to a private secondary school, however, where she would be forced to either start her introduction to the studies of political science or medicine. Lisya secretly refused, and applied to a junior military academy by completing the application and forging her parents’ signatures. She then checked the mail every day to make sure she could intercept the admission letter, which she was able to do. As she anticipated, she was accepted to the secondary school her parents chose, but to her surprise she was also accepted to the junior military academy she applied to!

She hid her acceptance letter and showed her parents the one from the secondary school they chose. Luckily for Lisya, the start days were the same, and her parents would not be helping her settle into the secondary school, as they had their own engagements on that day. Thus, when it came time to start school, her parents dropped Lisya off at the secondary establishment. Then, when they departed, Lisya ordered a ride to the junior military academy and checked in by herself.

Lisya settled in quickly, feeling right at home amongst the other cadets at the academy. She called home and told her parents there was something wrong with her room phone, so they should keep contacting her on her personal communication device, which they did. For about a month, she was able to fool them by acting as if she were at the secondary school. However, when her parents called up one of their contacts at the school to see if Lisya had stopped by to see them yet, their contact told them they had not seen Lisya at all. The person then checked the system and said Lisya never checked in and was listed as a no show. This caused Lisya’s parents to track her down, and when they found out she was enrolled at the junior military academy, they immediately went there.

Lisya was called out of class one day to her commanding officer’s office, and when she walked in and saw her parents, she knew the gig was up. Her parents reamed her for pulling such an insane stunt, and could not believe she defied them. Her commanding officer agreed, stating that her actions were irresponsible and reckless. However, the CO also said that in the month Lisya was there she had excelled in her studies and in training. So much so, that it was clear to the commanding officer she belonged there. Lisya’s parents were surprised to hear such a glowing review from a former GKF soldier, and after much discussion, they decided their daughter being somewhere she was excelling was more important than being somewhere she did not want to be. Thus, they allowed Lisya to stay at the junior military academy. However, for her deception she was forced to perform custodial duty as punishment for two months. It was a price Lisya was glad to pay to be able to stay at the academy.

A number of years later, Lisya was promoted to the Spitian infantry and ended up achieving a number of great feats. One of which was her act of heroism in saving Sirvia Trexion during battle. Then, after the two met and he healed, they began a relationship that was as strong as their military careers. They eventually married, and soon after they were both promoted to join the GKF ranks. From there, both continued to progress and were granted the title of Major. It was also at that time Lisya gave birth to her and Sirvia’s first child, Tixus Trexion. It was the happiest moment of Lisya’s life, and she raised Tixus along with Sirvia in a loving environment, nurturing all of his aspirations to become a great warrior. That was, up until their untimely death at the hands of a Tromokratesian lieutenant by the name of Kako, who went on to become the emperor of the Tromokratesian Empire.

It was this thought of his parents meeting their end to Kako that brought Tixus back to the present time from his trip down memory lane. A fire grew in his spirit again, and remembering his task, he left his quarters to begin recruiting the warriors he wanted to join him as he went down to Earth. The first person on Tixus’s list was GKF Lieutenant Creexus…