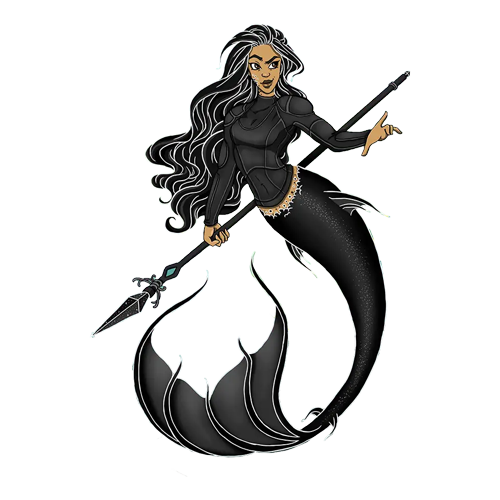 My name was Captain Noble. I was a superhero who worked for the US government, before becoming lost at space. After being consumed by the universe, I am now Cosmic Noble, and this is an excerpt from my new journal.

THE STORY
Lord Asotos Yios was no more, and the prince had regained his kingdom. The rightful heir to the throne had returned home and triumphed over his enemies, making him King Astor Rathegalia. And in his first act as ruler, he welcomed all werewolves back into the kingdom. Naturally, he said it would take some time for word of the changes to spread to all the lands, so he advised Max to stay in Luso, until things died down and it was safe for anyone who wanted to move back into the kingdom to do so. The king also said he would provide all the aid to Luso to help make it the home the Lusonians deserve. Max thanked King Astor, then went out to the balcony to await his ride home.

Sirena has the ability to transform her human body into a mermaid creature with advanced strength, speed, agility, endurance and durability, while in water. She has perfect vision and hearing underwater, enabling her to see for hundreds of miles in clear waters, and she can hear sounds up to the same distance in serene conditions. Her breath can fill human lungs with oxygen under water. She can also erase short-term memory in creatures, by using a special set of vocal chords while in mermaid form. She carries a long spear, and uses it with expert skill.

Delilah continued to inform us that the threat she left to deal with was making its way to Earth. Her words resonated in the same vein as did Hosho’s prophecy, which I informed her of on the spot. I told her about my own cosmic travels, and we both soon realized we were on the same mission: to protect Earth from impending doom at the hands of the Tromokratesian emperor.

King Astor told Lilith to take rule in his stead, while he accompanied me and Delilah back to Earth to defeat the threat my home world faced. However, I told him he could not abandon his kingdom and all his people after just regaining power. It was imperative he remained there to see the transition into the future was done righteously and justly. He wanted to disagree with me, but I also saw he understood the logic in my words. He then gave me a hug and said if I needed him, to not hesitate to return and request his aid. He would leave the portal open for me for as long as I desired. I thanked him for his selflessness, all of his help, his generosity, and for his friendship. We hugged once more, I gave Lilith a big hug, and then I asked where on Earth the portal would take me. King Astor replied from his studies, he remembered learning the portal went to the place where the English language originated. Now knowing my destination, I then turned toward Delilah to see what she planned to do next.

Delilah informed her GKF troops to take Max and his people back to Luso, then to fly straight to Earth. She was going to accompany me back home via the portal, so she could get there quicker to warn the Earth leaders along with me. They heeded her command right away, I waved goodbye one last time to King Astor and Lilith, and then Delilah and I jumped into the portal.

The trip through the portal was quick, but something did not feel right about it. The travel was bumpy and rough, unlike every other portal I had ever traveled through. Then, once we reached the other side, we fell ten feet into the middle of the ocean!

I looked around for Delilah, and she emerged top side a few seconds after me. Clearing the salt water from our eyes, I cursed the portal, and could not believe of all places we were lost in the middle of an ocean. Delilah said the energy readings she had from the portal were unstable, but she did not think we would be thrown off course. We were supposed to land in England, according to King Astor’s information. Needless to say, I was not happy.

I did not know exactly where we were, but I told Delilah we could probably fly to the nearest land mass. She was able to use her cosmic intuition and estimate that we were in the Atlantic Ocean, inside the area known as the Bermuda Triangle. All I could do was shake my head. Of all the places, of course we were in the BermudaTriangle, I replied. The good news was, though, that there were numerous islands not too far from us that we could reach easily, and we would not have to fly forever. Thus, we prepared to depart. However, we did not get to leave as soon as we thought.

Out of nowhere, a school of sharks attacked us! They bit our legs, and began dragging us down to the depths of the ocean. I tried punching them, but the force of being dragged down left me disoriented. Also, I was wrapped up in my monster hide cloak. I quickly took it off and went for my monster bone sticks, but those seemed to have been knocked off me during the initial attack. Then, I looked over and saw Delilah was being dragged down, too. We were both trying to free ourselves; however, we had no luck. Things looked very bleak. That was, until a savior came out of nowhere.

A figure emerged from the distance under water, and shot towards us with incredible speed. Once nearby, it smashed into the sharks and knocked us free. However, Delilah and my legs were badly injured. The blood began pouring into the ocean water, and that only attracted more sharks. Soon, it looked like it was going to become a feeding frenzy, but our savior came to the rescue again.

I watched as the mysterious being swam with the greatest agility and speed. The power it displayed when it struck the sharks was incredible. I also noticed it was wielding a spear for a weapon, and using it masterfully to strike death blows with each thrust and swipe. It was as if the being was not subjected to the laws of physics underwater. It moved like the water itself, and it handled the spear as fast as a warrior would on land.

One by one the sharks fell to our savior, and, eventually Delilah joined in the fight as well. Being a celestial, it was going to take more than some sharks and water to kill her. After a few more moments, the remaining sharks all retreated, in fear for their lives. The being had dominated, and it was apparent it was the greatest creature in the entire world that lived in the seas.

Unfortunately, by this time I was fading quickly from trying to swim to the surface with two badly hurt legs. My lungs were filling with water, and I was drowning. All my super strength meant nothing, if I had no oxygen and my body was filling up with sea water. The being swam up close, and I realized it was a mermaid! She was gorgeous beyond belief, and as sheapproached, she placed her lips on my mouth. When she exhaled, my lungs were filled with air that completely eliminated all the water in my lungs, and replaced it with enriched oxygen. The mermaid then grabbed me, and swam to the shore with great haste.

Once topside again, the mermaid took me to the nearest island in a flash. Then, after I gathered myself, I gazed upon the mermaid. She was a magnificent creature, and I immediately thanked her, as did Delilah, who followed us to safety. She acknowledged us and said those waters were hers, and it was her duty to help those in need. Next, I asked her what her name was. She hesitated, then apologized, saying it would not make much sense to tell me, since she was going to have to erase our short-term memories. Delilah asked why she would do such a thing, and she said it was to protect her secret. She did not want to risk the knowledge of a mermaid existing in the Triangle leaking out, and having fisherman from all over the world coming to hunt her down. Then, she said if that were to happen, she would have to remain in human form for the rest of her days, and she would not be able to bear a life without living in the sea when she wanted. The revelation that our savior was able to shapeshift between human and mermaid form was not expected. Nevertheless, I ensured her that her secret was safe with us. I replied that I am a hyper-human, and Delilah added that she was an eternal from outer space. We expressed how we were like her, and we understood her desire for anonymity. She was going to need more convincing, though.

As the mermaid thought over her decision to erase our short-term memories, I began floating above the surface of the water to show her we were the same. Delilah picked up on my queue, and she transformed back into her original eternal form; seeing us using our powers, especially seeing Delilah transform, swayed the mermaid to not make us forget. Then, she told us her name was Acindina Madera, but her mermaid name was Sirena. I retorted that my name is Cosmic Noble, and the eternal said her name is Delilah Fray. Sirena paused for a second and stared at me, before asking if I was the same man as Captain Noble. I answered I was, but I had been lost in space for quite some time, and the man I was no longer existed. Sirena joked that a beard and long hair did not change who I was, which made me think.

Delilah and I sat on shore for sometime, as we needed to give ourselves a few minutes to recover, before continuing our journey. Sirena waded in the shallow water nearby, and she and Delilah talked about living lives as shapeshifters, and some of the adventures they had experienced. Meanwhile, as my body’s hyper-healing factor kicked in, I pondered that even though she had no clue of the details behind what I had been through, she was was right, in a way. My monster hide cloak was gone, my monster bone sticks were gone, and I was no longer lost in space. I had braved the fires of my trials and tribulations, and returned home.

It was at that moment of realization that I noticed my body had fully recovered, and I informed Delilah I was ready to fly to Washington D.C. Thus, we said our goodbyes to Sirena, and flew off. It was time for Captain Noble to return.