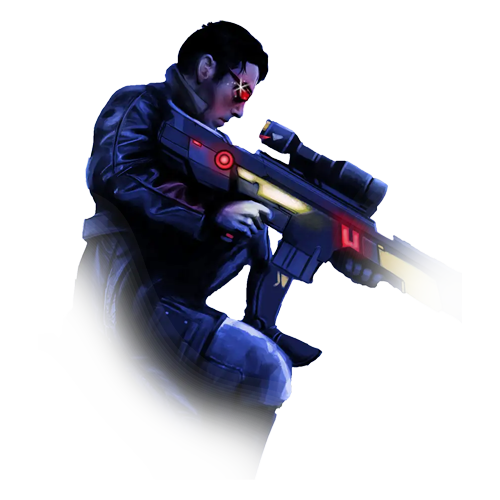 Cal Hampton was a former Olympic gold medal winning biathlete. What’s a biathlete, you ask? Well, it’s someone who competes in the biathlon, of course. That’s the event in the winter Olympics where the competitor must complete a downhill race on skis while holding a rifle and shooting at a spread of targets along the way. If the shooter misses any of the targets, they are assessed a penalty of one minute for each misfire. Cal, who represented the US, was never assessed any of those penalties… because he never missed. He retired at the age of 30 with the most medals by any athlete ever in the history of the Olympic games. It’s an accomplishment that few people actually knew about – as the biathlon was not exactly the most popular sport on the planet – but in Cal’s situation it was probably for the better, since his second career was as an assassin.

Caliber has no natural hyper abilities, but he is an expert sniper and uses a specialized rifle that has been modified with alien artificial intelligence.

And understand this, as an assassin, he also never missed a target. Cal took on the codename “Caliber” and for a few years he traveled the world making large sums of money as a hitman. Then one day he was hired by a mysterious benefactor to take down a ruthless businessman by the name of Edgar Lockhart. Caliber traveled to Platinum City and went through his usual methodical routine of scoping out the situation, studying the patterns and tendencies of his target, calculating the most efficient way to bypass the target’s extreme security measures and bodyguards, and of course figuring out a way to do the job cleanly so that he could get away without being spotted or suspected. After months of planning, Caliber finally concluded that the only way to get Edgar was during his weekly swim, which he took in his private pool every Wednesday morning, on the roof of Lockhart Tower. He would have to post up on the roof of another building about 250 yards away, then he’d need to wait for the perfect wind conditions, and at a precise moment, he’d have to fire a shot that would ricochet off the surface of the pool water and hit his target in the heart.

On the first Wednesday, the wind conditions never fell into place. So, he came back a week later. That day, Edgar had a guest and therefore was not sitting at his usual poolside position. So, he came back again a week later. But this time the clouds were casting too many shadows. For nearly seven months, Caliber came back every Wednesday morning and for nearly seven months there was a reason that he could not take the shot. Then came a chilly Wednesday morning in January. Caliber posted up in his usual location and waited for Edgar to make his appearance. As the morning progressed, the assassin realized that everything was falling into place, and before long he determined that the conditions were perfect. It was time to take the shot. He put his eye to the scope, took aim at the water and fired! He tracked the bullet as it flew through the air just as planned, ricocheted off the water just as planned and then… ZING! Caliber’s bullet was knocked out the air by another bullet! The sniper could not believe his eyes. But what he saw next was even more unbelievable. It was Edgar, looking right at him and smiling. That’s when Caliber realized he was surrounded. Three other snipers all had their rifles trained on him from a distance, and a fourth gunman was standing right behind him.

Caliber thought he was dead for sure. But that was not the case. Instead, he was Edgar’s guest at the poolside that morning. Edgar explained to him that he was the mysterious benefactor that had hired him for the job, and that the entire set-up was, of course, a test. Edgar had built a team of elite snipers and gunmen called the Lockhart Force, and he wanted Caliber to join up. The former biathlete immediately agreed.

Caliber became a valuable member of Edgar’s team and was rewarded with a specialized rifle that had been enhanced with alien artificial intelligence. It was a gift from Mr. Lockhart’s interstellar associate, Ashtar. Caliber immediately fell in love with the weapon. And he got his very first chance to use it during the 100th Anniversary of the Great Quake of 2016 when the Mayor of Platinum City, Gemini DeLisi, was set to give a speech that would be heard by everyone all around the world. It was a speech that was expected to have a huge impact on US politics and socioeconomics, as well as the environment and more. But that speech never happened, as total chaos broke out due to the Smash and Grab bank robbery crisis. In the midst of the craziness, Caliber was to make an assassination attempt on the mayor.

He hit four of the Mayor’s bodyguards. But he missed his target. Then again, he was supposed to miss his target. The staged assassination attempt was part of a master plan by Edgar to gain more influence and leverage in his dealings with Gemini DeLisi. But it was only one of the first phases of the diabolical scheme… more assassination attempts were planned. And this time, Caliber and his fellow Lockhart Force members would not be instructed to miss…