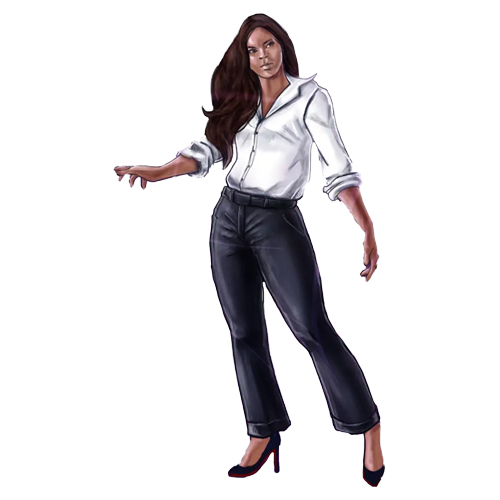 Jocelyn Heredia was a proud, vivacious Puerto Rican and Ecuadorian woman from Trenton, NJ. Her life was going great, and she had everything she could ever ask for: a beautiful condo in the heart of Northern Platinum City’s business district, a brand new, top of the line Tesla coupe, full designer wardrobe, and a large bank account. She had a Bachelor’s degree and a Masters degree in Latin American Studies, and used her expertise as an ambassador to the Latin American community for Mayor Gemini DeLisi. Her job was very demanding, and as such, Jocelyn decided to take some time off, due to feeling out of it. So, she went to visit her family in Ecuador; a trip that would change her forever.

While on vacation, Jocelyn went hiking, and took a number of trips to see ancient landmarks. On one occasion, she actually discovered a buried artifact with peculiar carvings in it. After showing it to her tour guide, they thought it best to take it to a local museum to discuss it with the archaeological experts. They didn’t arrive at the museum until many hours later, after Jocelyn had already been rubbing and holding the artifact incessantly. Unbeknownst to her, a process had begun.

Jocelyn herself has no powers, but Amayon has the cumulative knowledge of all of the people and entities he has ever possessed, and he can also spew poisonous breath through his host’s mouth. Additionally, the ghost orphan living inside of Jocelyn gives her increased physical abilities (strength, speed, durability and agility).

The archaeologists could not decipher its origins, so Jocelyn video-conferenced a fellow Platinum City alum , and her close friend, Dr. Lucia Yañez, also known as Mictecacihuatl or Mictlan in certain circles, as one of her PhDs was in Archaeology. Jocelyn and the archaeologists showed her the artifact, and for a moment Dr. Yañez went silent. Her face grew slightly pale, and she immediately commanded Jocelyn to drop the artifact and lock it in a box. She then proceeded to ask numerous questions about where she found it, and how long she had been holding it. Jocelyn grew nervous, but answered all the questions. Then, Dr. Yañez inquired if Jocelyn felt different, to which Jocelyn answered she had felt a bit agitated and, now that it was mentioned, began feeling increasingly compelled to pick the artifact back up again. Dr. Yañez said she would be on the first flight to Ecuador, and told everyone to stay away from the artifact, no matter what.

In 24 hours, Dr. Yañez was in Ecuador, along with an assistant from the University named Micah Shimpman. Upon their arrival at the museum, they found Jocelyn clutching the artifact. Dr. Yañez told her to drop it, but she refused. The doctor quickly stuck a pin in Jocelyn’s neck, which caused her to pass out. Dr. Yañez told everyone there to forget they ever saw the artifact, and it would behoove them to go to church and pray. With that, Micah picked up Jocelyn, and they drove back to the airfield to board their plane, and take off immediately.

When Jocelyn awoke, she found herself in the comfort of her own home in Platinum City. Much to her displeasure, though, she was bound and strapped to a bed, and locked down with heavy duty padlocks. Jocelyn began screaming in rage, which caused Dr. Yañez and Micah to burst into the room. A demonic voice exited her mouth, and her orange eyes were peering at her friend. It was just as the doctor had feared: the Amulet of Amaymon had began transferring the Demon King of the South in Hell to the soul of Jocelyn. It was then Dr. Yañez called in her associates – Seraph Solomon, along with Peter and Valerie Philadelphia.

The sight of the holy warrior enraged the demon, and Jocelyn began thrashing about violently. Dr. Yañez informed them that the restraints were made to contain gorillas, so they had nothing to worry about. Suddenly Jocelyn broke free from the bed! The doctor was astonished, and Solomon informed her the demon had amplified powers due to the presence of a ghost orphan living inside of Jocelyn as well. That ghost orphan’s name was Theresa Saulters.

Theresa’s spirit had journeyed throughout time, jumping from one lively woman to another. As a human, Theresa was never allowed to do anything enjoyable. She was a servant to a wealthy family. Thus, in death she decided to live it up. Theresa chose attractive, popular women to inhabit over centuries of time, and indulged in the finest of materials and entertainment. Her mistake, though, was when she decided to inhabit Jocelyn before her Ecuador trip, thinking she was on her way to an amazing vacation, for she ended up being a reservoir of spiritual energy for the demon.

As Jocelyn floated before them, Solomon shielded Dr. Yañez, and removed her from the forefront. Peter and Valerie stood behind Solomon and shielded Dr. Yañez, along with her assistant, Micah. Solomon and the demon engaged in a back-and-forth dialog, using ancient tongues. At one point, the demon laughed and mentioned in English that a specific silver ring would be needed to quell him. The seraph unleashed the power of his ring, surprising the demon. The room went dark, and the seraph called up lesser demons to come forth from the depths of Hell to assist him against Jocelyn’s possessor, but the poisonous breath of Amaymon dissolved them instantly. Micah became terrified at the sight, and tried fleeing. However, he ran into the poisonous breath, and was melted, too! Solomon quickly engulfed the others in a holy shield, then he changed his approach, and called in angels to aid him. The room became extremely bright and blinded Peter, Valerie and Dr. Yañez. Loud shrieking and the sound of thrashing followed, and when the brightness subsided, they all witnessed Jocelyn being bound by holy energy. The time to finish the battle was at hand.

Solomon began the banishing of Amaymon, then commanded Peter and Valerie to strike. As with Walter Tubbs, whom they’d had a similar battle with just 36 hours earlier, Valerie impaled Jocelyn in the heart, and Peter beheaded her. A portal to Hell opened, consuming the demon Amaymon, as Theresa Saulters, the ghost orphan, ascended to Heaven. The demon, however, refused to sever ties with the ghost orphan, and as Solomon chanted spells of separation, Dr. Yañez revealed herself as the mystical superheroine, Mictlan, and pulled out an amulet of protection. She pointed it at Amaymon, and screamed an ancient Aztec enchantment brujas used to ward off demons.

Solomon, Peter and Valerie were shocked by the doctor’s secret ability. They looked at her while she yelled for Amaymon to let her friend’s soul rest in peace. Solomon could feel Mictlan’s pain, and ramped up the exorcism, by pushing himself harder to channel more angelic power. Moments later, Amaymon was banished to Hell, and Theresa was sent to Heaven, along with Jocelyn’s spirit. The battle was over.

Mictlan silently cried, as she placed her amulet down. Peter and Valerie gathered their things and waited outside, happy the exorcism was finally over. Meanwhile, Solomon discussed how Mictlan impressed him with her use of the amulet, and encouraged her to keep her family’s bruja tradition alive. Mictlan was taken aback by Solomon’s knowledge of her past, as she never mentioned anything to him, but instead of asking how he knew, she assured him she would contact Micah’s and Jocelyn’s families about their passing. With that, the seraph and the Veil warriors moved on to the next possessed person.