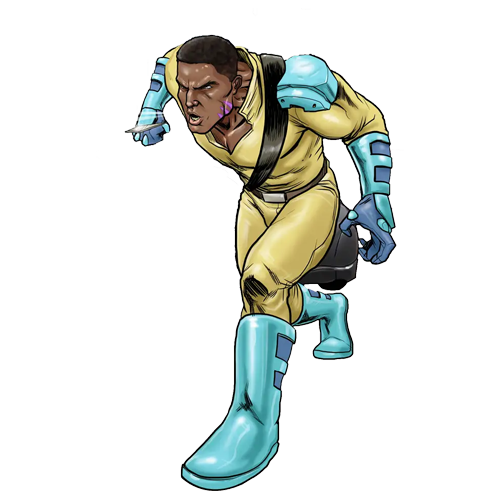 Ladarius Lincoln was born with a pair of mysterious glands on the insides of his cheeks that secrete a liquid substance which becomes hardened when it hits the air. As a child, growing up in the north Bronx, he learned how to manipulate the substance in his mouth so that when he spit it, it came out in different shapes. This became especially dangerous when he figured out how to form sharp projectiles, which basically meant he could spit blades at a moment’s notice. His friends gave him the nickname “Ox” in reference to the slang term for naked box cutter blades that gang members would often hide in their mouths between their teeth and cheeks.

Ox has a pair of mysterious glands on the insides of his cheeks that secrete a liquid substance which hardens when it comes into contact with air (i.e. when he spits it). He can weaponize it by spitting it in the shape of pointed projectiles.

Ox, however, was anything but a gangster. In fact, from a very young age he wanted to be a police officer. So, when he was 22 years old, he and his childhood pal, Julius (a super strong hyper-being who would come to be known as “Brolic”) attempted to enroll in the NYPD Police Academy. They were not accepted. Like many other cities in the country, the idea of “super cops” was a very unpopular notion. Ox found this out the hard way, as he and Brolic traveled to every major city in the country looking for an opportunity to serve. They were, however, rejected every single time.

At the behest of Brolic, Ox turned to vigilante work. But he constantly wrestled with the notion of operating outside of the law, so he quit after just a few months. He made up his mind to take one last ditch effort at earning a badge, and luckily for him the Platinum City Police Force just happened to be a little more open-minded. He enrolled in the police academy, along with Brolic, and they began their training. 2 years later Ox and Brolic were sworn in as officers. It was the proudest day of Ladarius’ life.

Ox and Brolic immediately excelled in their duties, but they were faced with quite a bit of adversity – especially Ladarius. While his partner’s powers blended in with society much easier, Ox’s external facial glands simply made people uncomfortable. Ox was the subject of constant scrutiny as citizens constantly watched for an opportunity to catch him using excessive supernatural force. Furthermore, his fellow colleagues did not appreciate his overachieving attitude as he made dozens of key arrests and chased down some of the most hardened and notorious criminals of southern Platinum City. He was under the assumption that these actions endeared him to the other officers, when in fact he was just making them all look bad.

Still, Ox was determined to impress and earn the respect of this sisters and brothers in gold, so when he heard several of them were in pursuit of Blunt and LaLa, two hyper-beings who’d just blown down a house in the upper class Summercrest neighborhood, he and Brolic set out to lend a helping hand. When they arrived, the officers had the two suspects surrounded. But another hyper-being had also arrived on the scene – the respected kingpin of the ‘hood, Spliff.

Spliff used his powers to drop a cloud of toxic smoke on the officers, allowing Blunt and LaLa the opportunity to escape capture. But with Ox and Brolic hot on their trail, Spliff made the decision to stay behind and confront the super cops.

As they stepped to him, Spliff unleashed another blast of toxic smoke. Brolic caught a deep whiff of the poison and fell to his knees, gagging for air. Ox, however, was able to use his spit glands to formulate a makeshift mask that filtered the smog and allowed him to breathe just fine. He leaped at Spliff and engaged him in a one-on-one battle, eventually gaining the upper hand and taking the drug lord down with a Taser shot.

With Spliff incapacitated, the poisonous smoke quickly dissipated and Brolic and the other officers were able to regain their breath. Ox slapped the handcuffs on the young entrepreneur, put him in the back of the police cruiser and took him down to the precinct for questioning.

Ox wanted to know the whereabouts of Blunt and LaLa, telling Spliff that they must face justice for attacking and destroying a civilian’s home. Spliff refused to give any information to the officers. He also questioned Ox’s “sense of justice” and reminded him that the civilian in question, Eli Stock aka the vigilante superhero known as The Prosecutor, had not faced any justice for killing a young, unarmed kid in the streets just weeks before. Spliff also reminded Ox about the incident involving Alan “Bud” Winchester, who had not yet answered for an armed takeover of a municipal court building that ended in the detonation of a particle bomb and the deaths of 4 people. Ox listened as the ghetto legend discussed the details of the police protection Bud had received while in custody and the massive amounts of money raised to pay for a top tier legal defense team. And finally, Spliff explained that he was the only one that had taken the time and effort to go after Hysteria, the hyper-being who ignited the Smash and Grab robbery incident that had essentially led them to where they were at that moment.

Spliff was not interested in the Platinum City Police Force’s version of justice; he was not going to cooperate. That was fine with Ox and he was prepared to take Spliff down to the holding cells to await further processing for the crime of assaulting an officer. His partner Brolic, however, had a different idea…