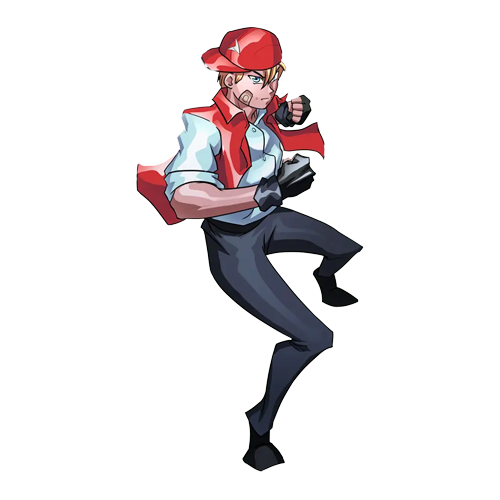 Tanner Worthington was born and raised in the affluent Platinum City neighborhood of Willows Cove. His parents are 1 percenters: his father is the owner of a billion dollar medical device company, and his mother is the owner of a billion dollar network of industrial manufacturing plants. Together, their marriage has formed one of the world’s wealthiest empires. Therefore, when they had their only son Tanner, they showered him with anything he could have ever wanted. Naturally, he became incredibly spoiled and entitled. He believed the world belonged to his parents, which in turn meant it belonged to him. He skipped every single philanthropic endeavor his parents ever engaged in, and refused to lend himself to any type of charity work. Tanner quickly became an unbearable monster of a child. Hence, when he learned of the burgeoning superhero movement, he demanded his parents get him super powers as well.

Kid Gen has an insanely powerful healing factor and lots of money to spend on crime-fighting gadgets.

Tanner’s parents fought with him regularly on the issue. They tried to explain superpowers are not simply manufactured like toys. They told him people are either born with them, experience a freak accident, or receive illegal, unethical treatments from mad scientists. Tanner insisted they employ mad scientists then. His parents obviously refused. This caused Tanner to despise hyper-humans and powered people. His parents attempted to eliminate his irrational hatred of this group by securing a day with his former idol, the Hero of Heroes himself, Captain Noble.

Tanner, however, totally flipped on the Captain, yelling he was not worthy to have the abilities he did and that it wasn’t fair people beneath him were allowed to be superior through their powers. Captain Noble took the opportunity to put the bratty kid in check, sternly chastising him for his behavior and mindset. The superhero then chastised Tanner’s parents for doing a lousy job of raising such a misguided child, and then left shortly thereafter. Needless to say, Tanner’s parents pretty much gave up hope of helping their son after that.

A few years later on his 17th birthday, something incredible, yet, tragic occurred. After years of spiraling downwards with reckless behavior, Tanner’s constant substance abuse finally caught up with him. Despite his obvious brilliance, his school work suffered greatly and he began flunking every class. However, his personal life was where he failed the worst, for one fateful night while driving under the influence of several drugs he smashed his $5,000,000 car into a light pole.

The car was obliterated, wrapped around the metal fixture like a ring on a finger. Parts of the wreckage flew blocks down the street because Tanner was doing over 200 mph when he crashed. Onlookers were certain the driver was dead. Alas, to their morbid amazement, When the Platinum City Police Department pried the car apart, Tanner was alive! His body was twisted and smashed, but somehow he had survived! But that wasn’t all – the EMTs found his pulse was getting stronger by the second and his body seemed to be healing itself. That was when Tanner discovered he actually WAS a hyper-powered being with super healing abilities.

As he laid in the hospital for days after the accident under observation, he contemplated on his powers. He was often punched in the face growing up for saying the wrong thing to the wrong person, but he never bruised or bled. He never got sick like everyone else, and not once did he break a bone despite all the skiing and extreme sports spills he’d taken. He never really took a second to be thankful in those moments, though. Tanner was always too busy thinking about how the universe better not ever try to hurt him, because he was better than everyone else and did not deserve injury or pain as other people did. But when his life hung in the balance, a part of the incredibly selfish, narcissistic, condescending, arrogant and rude boy died; a hero was born, so to speak. Tanner realized he was destined to use his powers.

The horrible person he was wasn’t completely gone, for Tanner believed he was gifted his powers as a birthright and not as a blessing. Nevertheless, he bought into the hero code of performing acts to protect and serve. Tanner promptly announced to his parents he was forgoing his acceptance to the prestigious Platinum City University – which they had to call in several favors to get – and left home to fight crime on his 18th birthday.

Using his parents’ money, he purchased a luxurious condominium in another incredibly affluent part of Platinum City, the neighborhood of Washtenaw. There, he spent millions of dollars combining all the condos next to and below him, knocking down the walls and reconstructing the top four floors of the building into his own personal fortress. He had a command center, an elevated garage with a private freight lift big enough to fit a tank in, along with all the latest surveillance technology he could buy. Thus, Tanner gave himself the name Kid Gen and began spending his days training to become a hero.

Meanwhile, he secured help. Someone else was listening in on police scanners and tapping into city street cameras for him. These jobs were performed by Colin Pettington, the only person who was remotely his friend. Colin could not stand Kid Gen the vast majority of the times they were together. He just knew how to tune the rich kid out completely. Plus, he was getting paid a six figure salary directly out of high school for his help.

Furthermore, he was the only person Kid Gen had any respect for, as he was often impressed by Colin’s genius level tech savvy. It was a match made somewhere other than heaven, but it worked. Kid Gen got all the information he needed to fight crime, and eventually he set out in the city to work. He quickly discovered, however, that self-teaching himself to box and do karate was not sufficient training to be effective.

The first few bad guys were easy to stop. They were petty thieves and Kid Gen had a host of gadgets at his disposal. The young hero soon learned the hard way he was not ready, though, as he started biting off more than he could chew. His encounters with more experienced (and more powerful) villains usually ended with him getting him viciously pounded. It was happening on a regular basis, but instead of getting discouraged, he would only get more enraged. He refused to believe anyone was better than him, so he never stopped fighting despite the brutal beatings.

Eventually, bad guys would just leave Kid Gen battered and flea the fight scene. Kid Gen’s body would fully heal shortly after, but his ego could not. Such was the case when he came across a particular woman and a super soldier…