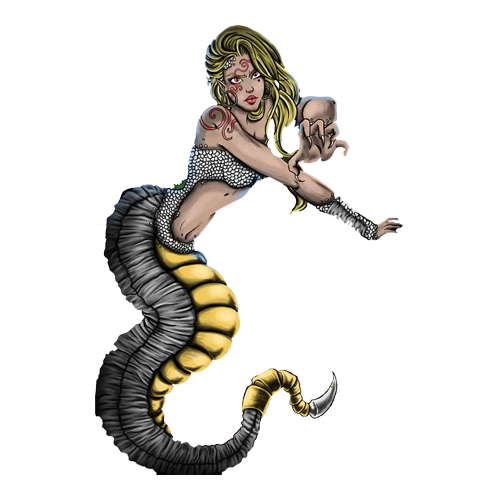 The villainous witch Fata Morgana has a number of dangerous powers, however, when she has exhausted her hyper-human abilities against an adversary, she has the power to take on a not-so-human form that makes her a total and literal nightmare for anyone who stands in her way.

She didn’t always possess this power. In fact, her creature form was much more of a curse in the beginning. From the time she was a child she’d had the ability to create teleportation vortexes in the form of illusionary doors. And as she grew up, she spent lots of time traveling – first all throughout the world, and then all over the galaxy. But as she became more powerful she discovered that she could also transport to alternate realms of reality, as well as different dimensions.

Fata Dracaena is a creature with enhanced strength, and a thirst for blood. She has razor sharp teeth and long claws, and a giant tail with a deadly pincer on the end.

She found beautiful and wonderful worlds during some of her journeys, and dreadfully horrible places during other forays. Her mystical powers often protected her from the dangers she would encounter along the way, and so she felt comfortable and confident with adventuring into the further reaches of alternaty. She even found her way into Sir Vellichor’s Grand Library (which was couched in an alternate universe) from time to time, where she would research the existence of more exotic locations, realities and realms. She’d had a couple of run-ins with some of the library’s occupants, like Cliché and Binder, but she was never really sure if the Master of the Library himself was ever alerted to her presence. Either way, it was one of her favorite places to visit.

Her curiosity, however, got the better of her when she found herself in the 5th Oblivion, a dimension ruled by the goddesses Sedah and Nevaeh. Thieir powers easily outstripped Fata’s, and the wormhole witch quickly learned she would only be able to leave when they allowed it. And that wouldn’t happen until after they toyed with her. Sedah and Nevaeh had a knack for inserting visitors into cruel life-or-death challenges. Sedah would implement the game, and Navaeh would imbue the player with an ability that could potentially help them survive the proceedings.

In Fata’s case, Sedah unleashed a horde of monsters she’d have to fend off. However, these monsters were immune to her mystic abilities, meaning she’d have to defeat them in hand-to-hand combat. It would have been an impossible feat, of course, but that was when Nevaeh came in. She offered Fata a chance to survive the monster onslaught, however, she’d have to become a monster herself. Without hesitation, Fata agreed. And Fata Dracaena was born.

She was transformed into a giant half-woman-half-snake hybrid, and proceeded to lay waste to the monsters that attacked her. Sedah and Navaeh greatly delighted in the way she eviscerated the creatures, and were even a little saddened when the massacre was over. As per their agreement, Fata was released from the 5th Oblivion, but she was still in dracaena form. She was, however, eventually able to use her mystic powers to transform herself back to a human. And furthermore, she developed the ability to switch back and forth at will.

With her new level of abilities, she decided to take her villainous antics to new levels as well. Throughout her travels she had begun to hear rumors of powerful elements that, if brought together, would give their wielder immense power, and she had further learned that a trio of US spies possibly had knowledge of these elements. She set out to kidnap them, but once she had them she was unable to extract the pertinent information from their minds. And so she ventured out to solicit help from the telepathic hacker, Cosmo Cortez.

However, when she attempted to coerce Mr. Cortez into assisting her, Captain Noble, the Hero of Heroes and his friend, Shuttershock were there to stop her. A battle between Fata Morgana and the heroes ensued, and the witch took Noble and Shuttershock on a wild ride through her maze of vortexes.

Fata made life miserable for the heroes, taking them to dangerous worlds, and unleashing all kinds of monsters and creatures on them. She realized, however, that she would not be able to defeat the duo as long as they were working together. And so she successfully devised a plan to split them up. Captain Noble was sucked through one vortex, while Shuttershock was taken through another.

With the heroes divided, Fata was in a better position to vanquish them. She went after Shuttershock first, but his ability to absorb light and redirect it in the form of powerful blasts still proved to be a little much for her, and so it was time to transform from Fata Morgana to Fata Dracaena. Her creature form was an absolute nightmare for Shuttershock, who was immediately overwhelmed by its strength and brutality. She gained the upper hand, and smashed the hero into the side of a mountain, knocking him unconscious and leaving him prone for her to finish him off.

Before she could, however, another teleportation vortex suddenly opened, and to her great shock, the heroes Lightrider and King Ka’Desh came through the portal! Ka’Desh engaged Fata Dracaena in battle, while Lightrider tended to Shuttershock, whom she had known from Earth years ago, before either of them had hyper-abilities. In fact, Byron and Lacy (their birth names) had been a romantic couple and were together in a meadow, when suddenly an exploding star crashed on their location. At the time, Byron had proposed to Lacy, and was awaiting her answer. However, the explosion interrupted their moment. Instead it became the moment they gained their powers, and it was also the moment Lightrider inadvertently leaped a million light-years away from Earth.

And now, after several years, this encounter with Fata Dracaena had reunited them. Lightrider went over to the unconscious Shuttershock, and held him in her arms. But as he woke up, something began to happen: because Shuttershock’s body is a living black hole, while Lightrider’s is a made of living light, he began to absorb her and thus, drain her life force.

Realizing what was happening, she flew away from him until she was at a safe distance nearly a hundred feet away. Shuttershock finally regained his full awareness, and upon seeing his true love, struggled to his feet and began to walk toward her. But she screamed for him to stop, and explained the problem with them getting any closer to one another. They were at an impasse.

Meanwhile, Fata Dracaena and King Ka’Desh were locked in a vicious battle. Ka’Desh, however, was able to gain the upper hand and impaled the creature with his mystic spear. This action caused her to transform back to a weakened Morgana form, which also allowed her to open up a series of portals and bring another horde of monsters into the fray. King Ka’Desh was in trouble.

Thinking fast, Lightrider flew off into the battle and engaged the horde of monsters, which gave King Ka’Desh the opening he needed to overtake Fata and knock her out. He raised his spear and was prepared to end her, when Shuttershock flew over and stopped him. Fata was the only one who could tell them where Captain Noble and the missing US spies were.

King Ka’Desh agreed to use his teleportation abilities to take them all back to Earth, but Lightrider refused to go with them. Shuttershock was crushed when she said this, but she explained that she would hold off the monsters while they escaped. Furthermore, the two of them traveling through a vortex together could have incredibly catastrophic results.

He knew she was telling the truth, so he instructed King Ka’Desh to open a portal, then they picked up Fata’s unconscious body and prepared to leave. But before he walked through the vortex, Shuttershock yelled back to Lightrider that he never got an answer to his marriage proposal. She told him that once he returned home he would be able to find the answer written in the stars…

And with that the vortex closed, and Shuttershock, King Ka’Desh and Fata were back in Washington D.C. The villain was taken into custody by Lt. Rashard Bonds, but because she was unconscious it was impossible to interrogate her. They would have to figure out a way to bring her out of her coma. Shuttershock was then debriefed. His ordeal with Fata had kept him away from the planet for months. The CIA needed to know what had happened, and more importantly, they needed to know the whereabouts of Captain Noble. The latter was impossible for him to know, and the former was actually provided through Captain Noble’s digital journal, which King Ka’Desh had recovered as a result of a wild chain of events.

After nearly 24 hours Shuttershock’s meeting with the CIA ended. That night, he traveled back to the meadow he was in with Lacy when he proposed. He laid out in the field for a long time, staring up at the stars. Then he got the idea to grab his camera, and point it at the sky. He opened the shutter and allowed it to take a long, continuous shot of space. He then closed the shutter and pulled the picture up on the display screen. Among the stars was written the word “YES.”

At that moment Shuttershock made up his mind to do whatever it took to find his way back to her.