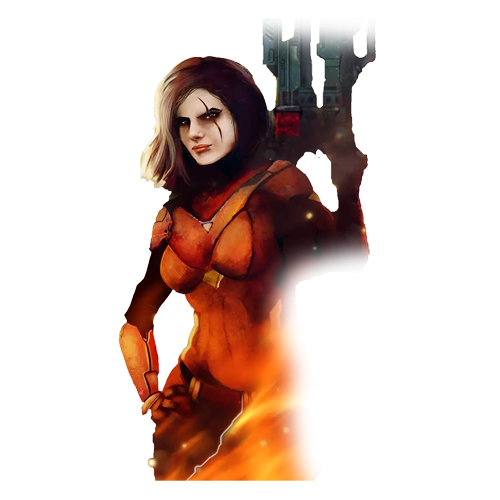 When we busted down the door, there were a few more guards at the side of Attrition. Shuttershock easily disposed of them with blasts of light energy, sending them flying through walls. Finally, we had acquired our target.

Attrition has no natural hyper abilities, but she is a master manipulator and a weapons specialist. The battle armor she wears gives her enhanced strength and durability. Also, she possesses a mysterious mythical talisman that makes her mind immune to telepathic probes or attacks.

Attrition sat in a chair behind a desk, clapping her hands with a smile on her face. Above all else, she LOVES conflict. Our battle with Shafaf and her guards brought her much delight, even though her men were defeated. Any type of fighting, whether it be diplomatic maneuvering or violent genocide, is exactly what Attrition lives for. If there is the potential for anything from a skirmish to a full-scale war, she will find a way to be involved. The reasoning behind her undying affection for conflict is beyond me or anyone else. All we know is that it is the single driving factor behind her existence.

Attrition has been a player on the black market scene for quite some time now. She sells arms to rival factions and countries, helping incite conflict or further the progress of blood baths. She is a master manipulator and a collector of sensitive secrets, which means she has dirt on EVERYONE. In fact, I’m sure she knows things about me that I don’t even know about myself. Not only that, but her mind is a literal vault. Several telepathic hyper-beings have been tasked with the job of breaking into her brain but to this day no one has succeeded. There is a rumor that Attrition is in possession of an alien stone that produces a psycho-kinetic barrier around her mind, but the existence of it has never been confirmed. Thus, she continues to use her extensive influence to incite death and mass destruction. For her it’s not just a lucrative profession; it’s a hobby that brings her great pleasure.

So who better than Ramses Hondo to help satiate her addiction. Not only is he the wealthiest and most connected arms dealer in the world, he also has a knack for creating chaos. They do not call him the Living God of War for nothing. Thus, the reason why Attrition has clung to him in recent months. She is like a leech, sucking the blood and misery of the fallen who have been annihilated because of their dealings. This is the same reason we were able to uncover a lead to Ramses’ whereabouts. Attrition was not as discreet about the moves she makes, making her easier to find.

I told her to keep her hands flat on the table while Shuttershock patted her down. He removed three handguns and two knives. After she had been stripped of her weapons, I began to explain why we were there. I mentioned our intel led us to her, and the fact Shafaf was protecting her meant Ramses could not be too far away. She remained mute at first, and when she did speak, she offered us nothing of value. If her mind was a vault, then her mouth was a steel trap. From what I knew about her, I could see the conventional methods of questioning were not going to be effective with Attrition. So, I switched my approach, and decided to make her an offer she couldn’t refuse – I offered her the opportunity to help incite another conflict.

I told her we were looking to pick a fight with the biggest, baddest man in the terrorist game. Attrition’s ears perked a bit. I followed with the fact that I personally was seeking revenge on Askari, Fahim, Jamad, Qadira and Shefali; that once I found them, I would bring a battle to their doorstep the likes they had never seen before. Then, when I finished with them, I would square off with Ramses himself, showing the world their living god is nothing but a mere mortal.

Attrition’s eyes grew wider and a smirk returned to her lips. She was imagining an epic showdown between me, The Pharaoh and his people. She turned to Shuttershock next, asking him what he was there for. My partner replied he planned on doing the same, and he wasn’t going to stop until all of them were brought to justice. Attrition slammed her hand on the desk and cheered. She exclaimed she finally would have a fight worthy of her interest. She now had more than enough reason to give us the lead we needed.

She told us Ramses had recently fled east, towards Tibet. He has a secret compound there. It is heavily fortified, and according to Attrition, we would be insane to try and confront him if he reaches it. That would make for a lousy battle, and she would not be too happy with a slaughter of a fight. Thus, we had to hurry. She gave us the exact route he takes out of Egypt to get there as well. If her information is true, it appears we can reach him in a number of days, well before he arrives at Tibet. However, once he reaches the Himalayas, there are a number of different paths he could travel, seeing how nobody, not even Attrition, knew the secret compound’s exact location in the mountains.

Shuttershock was surprised and asked her why she would give us all the information if she was not going to be present for the battle. She answered that she WAS going to be there, as she was coming along with us. It was a fight she refused to miss. I, on the other hand, refused to have her accompany us. Attrition replied that one way or the other, she was witnessing this battle. If she had to travel on her own to the end of the path before Ramses and his people enter the Himalayas, she would do so.

It was at that point that I slapped some handcuffs on her and radioed for our convoy to move in and take Attrition into custody. She shook her arms and cursed me for denying her a front row seat to the throwdown. I gave her a pat on the back as the soldiers took her away, and commented I would stop by her holding cell to fill her in on the details of the fight if she did not resist arrest. Attrition yelled that we had nothing on her and that her arrest would amount to little more than a few days, before she was released.

That was true. Although she was present at the compound and although we knew her penchant for inciting conflict, we still had no actual concrete evidence of any of her arms deals. In fact, even the weapons she had on her were legal. In other words, she would definitely be back on the streets in less than a week. However, any chance to get her off the grid, even for 24 hours, was worth capitalizing on. So I instructed our ground troops to take her into custody.

I watched as Attrition, Shafaf and their troops were loaded into armored prison trucks and saw the convoy off. Then Shuttershock and I took off and headed for Tibet.