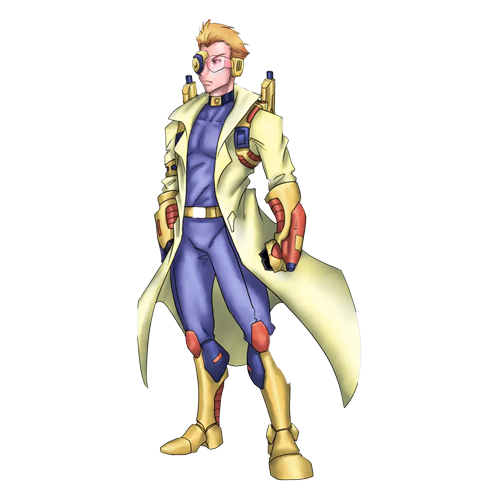 Shuttershock and I stood across from Icarus, puzzled as to how we could further tip the scales in our favor to subdue the creature. That’s when the metal pole I wrapped around the double doors at the end of the hallway were blown to bits. As the entrance was flung open, the attention of all three of us was immediately drawn to the individual that had entered. Flames clung to the edges of the doorway as smoke filled the opening, but slowly dissipated. I did not know whether it was another enemy or an ally. Neither did my partner, so we prepared for the worst. Alas, it wasn’t another radioactive enemy. It was none other than Dr. Dennis “Destructo” Daniels himself.

Dr. Destructo has a genius level intellect. He has also used an other-worldly substance called “blue matter” to create enhanced prosthetic body parts, that he added to his own anatomy. This process has given him slightly enhanced speed and strength. Additionally, he has augmented himself and his gear with a number of tools and weapons.

Dr. Destructo is a very peculiar character. Once upon a time, he was the head doctor at New Hero Hospital. He oversaw its progress from a fledgling facility to a major player in the study of powered-beings through creating a dynamic research and development program. People from all over the world requested Dr. Daniels’ expertise, from other hospital groups to government agencies. He was highly regarded as the foremost expert in the field, and was responsible for much of the layperson’s understanding of hyper-abilities during the emergence of powered-beings into the mainstream. His studies and casework helped provide a clear path towards acceptance, as opposed to widespread panic and fear amongst the masses. There are still many across the globe who either fear or disapprove of powered-beings, but pioneers like Dr. Daniels helped quell some of that. He always had great empathy for outcasts and those afflicted by physiological abnormalities, too.

Before he worked with powered-beings, he was the leader in the study of genetic handicaps and deformations, creating numerous outstanding developments in prosthetics to not only help those with disabilities function as normal people, but appear normal as well. His prosthetics are extremely lifelike, and brought comfort to millions. It was this same empathy, though, that eventually began his descent into relative madness.

After the first discovery of blue matter, Dr. Daniels became enthralled with it. Obsessed may be a better word, actually. He knew it was extremely dangerous for humans to be exposed to, as a successful adaption to its properties was about a 1 in a trillion chance. However, he refused to believe there could be no way to incorporate the substance into the human body to help enhance it. For years, he neglected his work in pursuit of this discovery. NHH began to fall apart, but he did not care. All Dr. Daniels cared about was his work with blue matter.

The board removed Dr. Daniels as the head doctor and replaced him with the brilliant Dr. Elizabeth St. Pierre. He was kept on as a consultant for the R&D department, though, as his genius was undeniable. And it was this genius that led to him discovering blue matter could be used to power the hardware and software technologies he used for the artificial limbs and prosthetics he created. Dr. Daniels immediately began experimenting on himself. He removed parts of his anatomy and replaced them with prosthetics infused with blue matter. Essentially, he turned himself into a cyborg: a perfect harmony of biology and technology. And yes, he weaponized himself. Thus, Dr. Destructo was born.

Icarus realized he was now outnumbered 3 to 1, and began to stomp around in anger. Dr. Destructo told us to bring the creature to him, so Shuttershock wasted no time and blasted the monster with a continuous light beam. The initial impact rocked Icarus, but he quickly put his wings up to block it. I flew behind the creature, grabbing him by his hind legs and launched him towards Dr. Destructo. It was like a round of skeet shooting after that, as Dr. Destructo fired energy blasts from his shoulder cannons, sending Icarus through a nurses’ station and into a wall. Shuttershock and I charged in, expecting the creature to get right back up. However, he was unconscious. Dr. Destructo calmly walked up behind us and told us to be at ease. He explained how he outfitted his cannons with an anti-blue-matter pulse ray. It causes the substance to enter a dormant stage of activity, ceasing its constant flow of energy. Thus, after blue matter is combined with human or animal DNA, this means the anti-blue-matter pulse ray basically diminishes bodily functions. In other words, Dr. Destructo had knocked Icarus out cold.

NHH nurses rushed to Icarus to check his vitals while soldiers employed by the hospital restrained him with anti-blue-matter wires, and placed him in a restrictive force field. The creature was finally subdued, containing the threat. I apologized to Dr. Destructo for all of the damage, but also explained it really was unavoidable. He understood, saying NHH was just glad I was there to not only help, but to also finally get Shuttershock into action as a superhero. I looked at Byron, who looked back at me with a smile on his face. He said it felt good to protect the innocent and help others in need. He also reminded me of our deal, to which I replied I would be finalizing it as soon as I returned to Washington D.C., regardless of what my superiors said.

Dr. Destructo asked us what deal we had struck. I explained how in exchange for Shuttershock’s partnership, I would get the US government to help NHH locate his fiancée, and I myself would help reunite them once she was found. This brought a very intrigued look to Dr. Destructo’s face. He said he wanted to show us something, and calmly told us to follow him…