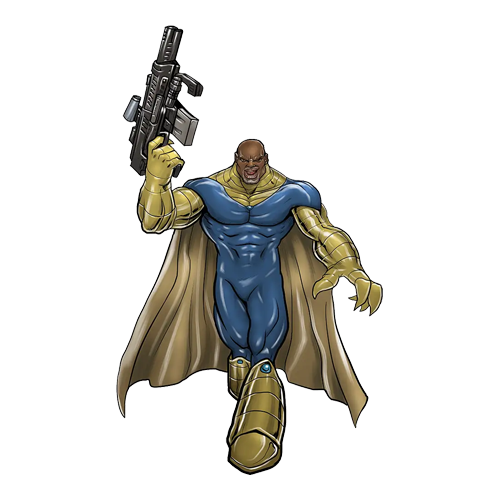 His name is Ramses Hondo. He’s also known as The Pharaoh. The only identity of his I am concerned with though is as the world’s largest arms dealer and elite mercenary overlord. Ramses not only controls 90% of the black market weapons trade, but he also has the top 17 mercenary and terrorist groups on speed dial, ready to execute his every order with professional precision without asking a single question. The CIA, MI6 and the United Nations have all been hard pressed to bring him down. Multiple countries across the globe have failed for years in trying to bring The Pharaoh down, and now they are looking to me to make that happen.

Little has been known about him. Ramses has been a ghost for quite some time, allowing him to operate as if he had impunity, while furthering his own agenda and increasing his stronghold over justice and freedom in every country across the globe. Regardless of my super powers and resources, I could not fight a phantom figure wielding that much power and influence. Therefore, I would have to attack Ramses indirectly at first.

Ramses’s intelligence is literally out of this world; his natural human intelligence combined with the alien intelligence he has acquired make him one of the most brilliant men on the planet (and in the universe). He is a master battle tactician and weapons specialist. He also possesses super strength, speed, agility and durability.

For the last few weeks, I have been secretly aiding US troops with their mission to upend terrorist regimes in Syria. Serving the Oval Office’s foreign policy agenda is not what I was there for, however. Intelligence was gathered that somewhere in Syria, Ramses had a secret base of operations. After about two weeks, I finally found it. Unfortunately, it was cleaned out and abandoned by the time I got there. Word of my arrival appeared to have reached The Pharaoh just in time. I felt like the Whos, waking up on Christmas morning, looking at all the loose wires and empty rooms after the Grinch cleaned their homes out. It was absolutely empty. Initially, I was not even going to search. Something told me to do some digging, though, and I’m glad I did, because I found a journal. It belonged to one of Ramses’ disciples, and it had an incredible amount of information, which lifted the veil from the ghost that is The Pharaoh.

According to the journal, Ramses was born in Cairo, Egypt to nuclear scientists who worked for the Egyptian military. At 6 years old, he was kidnapped by a separatist army who wished to obtain new, experimental nuclear bombs to use against their native government which they deemed oppressive, and they planned to use Ramses as leverage to do so. However, the Egyptian government refused to let Ramses’ parents negotiate with the rebel army, for they knew if the new nuclear technology were to get in the wrong hands it would mean chaos and destruction for all of Egypt. Once rejected, the rebels planned on killing Ramses. However, the leader decided to keep him alive and raise him as one of their own, eventually evolving into a father figure to him.

Over the years, Ramses became incredibly adept in military generalship. He overflowed with knowledge of all types of guns, ammunition, explosives and war technology at a young age. By the time he reached 14, he was appointed to second in command of the separatist army. Things seemed to be progressing great for him. Shortly after, though, the Egyptian military discovered their secret location and struck with a preemptive attack, resulting with the rebel leader being killed as the faction was close to being completely wiped out. Ramses did escape with a dozen men and women, though, and they immediately went into hiding. With their numbers low, however, and the remaining separatists not having much faith in Ramses as their new leader, he was overthrown as their general and left alone to fend for himself.

While wandering Cairo for months solo, Ramses remained in the shadows of the city. During this time, he continued to hear how the Egyptian military was hunting down the remaining members of his army one by one, executing them all. For fear of his life, Ramses decided the only way he would survive was if he was able to raise a new army. In order to do so, he knew he needed to offer something to potential soldiers that would negate his young age and allow them to have faith in him. Thus, he decided he must infiltrate his parents’ laboratory and steal their technological secrets.

Employing all of the masterful skills as a mercenary and assassin, Ramses snuck into the military base on a covert mission. He was able to successfully gain access to his parents’ laboratory, where he discovered that they were using alien technology to advance the Egyptian government’s military weaponry. He hacked into their computers after deciphering their password, which was ironically “Ramses”. He copied all of the files, then grabbed as many Earth/alien hybrid prototype weapons as he could carry. As he was leaving, however, he stumbled upon his parents.

They immediately recognized him and could not believe their eyes. As they called out his name and began to say how filled with joy they were to see him alive after years of believing he had been killed, Ramses flew into a rage and began to curse them for leaving him to perish at the hands of the separatist army. He then told them how it was the army who became his family and raised him. Ramses’ parents wept and begged for him to believe that they had no choice, that they were at the mercy of the Egyptian government. Not accepting their explanation, though, Ramses referred to the mantra of the most influential person he ever met – the former leader of the separatists – and said a family must have allegiance to one another over everyone else. Ramses then grabbed one of the hybrid handguns and fatally shot both of his parents. Having exacted cold-blooded revenge on them, Ramses then set fire to the laboratory, causing an enormous explosion! Afterward, he fled Cairo to a small village miles away and went into hiding, as it was much too dangerous in his home city.

Over the next four years, Ramses dedicated himself to mastering the knowledge of the hybrid weapons and the alien documents from the Egyptian military archives. When he reached the age of 18, he became an expert in all things alien, unlocking their secrets and becoming proficient in using the hybrid weapons as well. In order to duplicate the tech, though, he needed to access a secret location controlled by the Egyptian military, where a communication device existed that could allow humans on Earth to connect with the alien race they inherited the technology from. So, Ramses recruited a small tactical force and utilized the new weapons, leading them on a successful attack into the secret location, taking control of the communication device.

Next, Ramses reached out to the aliens on the device using their native language, something neither the Egyptian military nor his parents were able to do. An immediate response from the extraterrestrials was received in the form of Ramses being teleported from the secret location to the alien’s headquarters. Not fully realizing what transpired, the remaining soldiers had no choice but to take as much of the equipment as possible and flee the secret location to go back into hiding as the Egyptian government would undoubtedly send more troops to recapture the facility.

Days later, Ramses returned a completely changed man. Noticeably, his eyes and beard were bright white now as opposed to brown and black, respectively. His body seemed enhanced as well, as if he underwent some sort of physical upgrade or transformation. When he was asked by his soldiers what happened while he was away, The Pharaoh refused to divulge any information. All he told them was, he now was brimming with advanced knowledge and a technological prowess second to none, and that their blind faith and loyalty was required to fulfill a new mission. Without hesitation, the soldiers agreed.

So, Ramses explained, the first order was to begin amassing wealth and power; it was time for them to use the alien technology to manufacture more hybrid weapons and become the foremost arms dealers in the world. He explained this would not only make them wealthy, but it would also help them gain the allegiance of mercenary and terrorist factions, both being imperative to the success of the mission. And so it was. Ramses began secretly developing hybrid weapons and sold them to the highest bidders, later using that money to establish mass producing factories to sell even more weaponry. Quickly, The Pharaoh’s empire grew into one of the wealthiest in existence, and Ramses became arguably the most dangerous man in the world.

Ramses “The Pharaoh” Hondo is now known as the “Living God of War”. At 35 years old, his success has not only gained him criminal and mercenary allegiances, but also partnerships with some of the world’s most powerful figures. In fact, recent intel had suggested he may have teamed up with Edgar Lockhart. I did not believe it, however, until I read the journal, which mentioned Lockhart Holdings as well.

What the nature of this potential connection may be? I am not sure. Edgar owns the most advanced technology and weapon patents today. He certainly does not need Ramses as a partner. However, the allure to integrate alien technology could be too tempting to resist. If it is true that Edgar has joined forces with a fiend like Ramses, the combination of a partnership between the two could certainly mean a massive power play is at hand. Combining Edgar’s global network of money, power, enterprise influence, manufacturing resources and political connections with Ramses’ alien technology and military power would create an immediate global threat. I need to uncover whether or not there has been a union between Lockhart Holdings and The Pharaoh’s empire. Looks like it’s time to head to Platinum City for some answers.