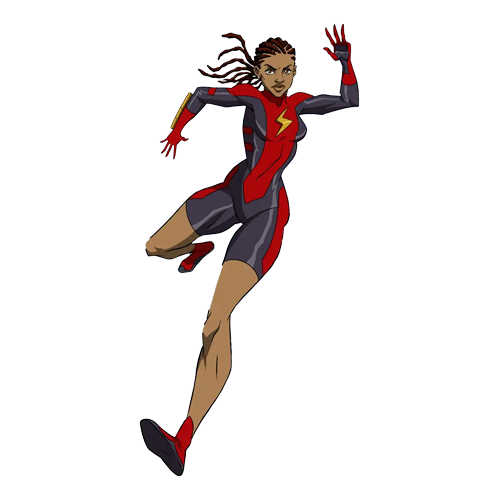 Jessica Lowery was on her way to becoming an Olympic Star as part of a four-by-one relay team. She and her college teammates, Courtney Wallace, Swinn Searlesbay and Zipporah Parks were in the process of running a race that would have put them in a position for glory, when suddenly they were transported to an alternate world called the 5th Oblivion.

Jessica has been imbued with hyper-speed by the goddesses of the afterlife.

It was a strange and terrible place with a sharp red sky filled with heavy clouds, deformed stars and swirling rains. It was a place that was ruled by two ethereal entities; powerful women who called themselves the goddesses of the afterlife, Sedah and Nevaeh. And they wanted to play a game with Jessica and her friends. Sedah told the runners that the only way for them to survive this world was to “outrun themselves.” The goddess had created evil, sadistic clones of the four women, who would give chase to them with death being the result if any of them were caught.

In order to give them a fighting chance, however, Nevaeh would enhance their capabilities by imbuing them all with hyper speed! While her teammates were terrified of the situation, Jessica welcomed the opportunity the gain superpowers and embraced the challenge set before her. And as they spent what felt like an eternity, running for their lives in this dark parallel universe, it was Jessica who would often look for opportunities to go after the goddesses themselves.

Whenever Sedah and Nevaeh appeared to them, Jessica would turn her attention toward the ethereal women in an effort to test the limits of their powers. If they were standing in the distance, Jessica would dash toward them! If they were floating in the air above, Jessica would attempt to launch herself up toward them. What she would do if she ever actually caught one of the goddesses? Well, she had no idea. What she did know, however, was that with each attempt to make contact with Sedah and Nevaeh, her own abilities were becoming sharper and more powerful.

Finally, Jessica and her friends were released from the 5th Oblivion and allowed to go back to Earth, but it was at a cost. The spirits of the four evil clones would take up residence in the bodies of the sprinters, thus giving Sedah and Nevaeh the ability to call on them for special and/or nefarious tasks and missions.

Again, Jessica was the only one of the four to truly embrace the situation. They had been gone for what amounted to 8 years, but they had not aged and they had gained hyper abilities, of which Jessica fully intended to take advantage. The four women were soon conscripted by Reina Valencia, a tyrannical business woman who ran Universal Intelligence, a multinational conglomerate that specializes in, among other things, the development and implementation of A.I. components.

Before long, Reina’s team had enhanced their abilities and now they were ready to be put to work. Jessica and her teammates became some of Reina’s most trusted and capable henchwomen, but of course, Jessica Dash (as she has now begun to call herself) was the most capable and the most willing of them all. So when she was called into battle against the Sista Clique, a team of superpowered heroines, she jumped at the opportunity to truly test her own skills.

She sprinted from Universal Intelligence World Headquarters in Northern California to Las Vegas, where a number of wild circumstances and occurrences had turned the Strip into a warzone. Her partner, Courtney Quick had already arrived on the scene and engaged the Sista Clique with the main purpose of kidnapping the super group’s de facto leader, Kharma Lucky, for Reina and her associates wanted to use Kharma’s telepathic abilities to enhance their psycho-technology programs.

With the powerful and determined Jessica Dash now in the mix, the fight became more desperate and more destructive. Despite the combined speed of the sprinters, the Sista Clique was able to prevail, fighting Jessica and Courtney off and forcing them to retreat. Kharma Lucky was safe… for now…

Jessica Dash returned to Universal Intelligence and immediately went to see her boss, Reina Valencia. She explained to the sadistic CEO that she needed her full team if she was going be to truly effective against superheroes and other hyper-beings. Reina assured her that the other two sprinters would be ready for battle soon. Then she turned on a virtual screen and showed Jessica footage from a lab on the 17th floor of Universal Intelligence, where “Swinn Swift” and “Zipporah Zing” were going through the final stages of their enhancement regimen.