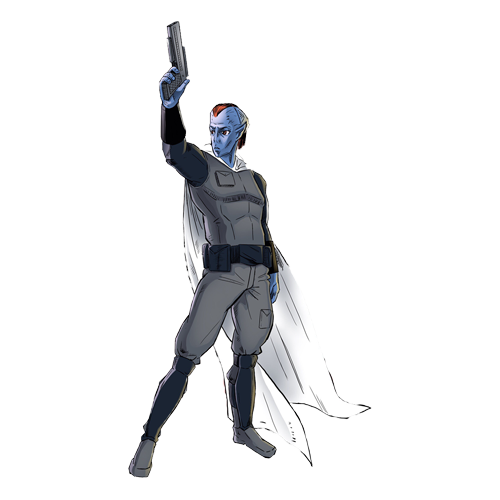 The planet of Aperokea is almost entirely water. It once was similar to Earth during theice age, until the vast amounts of ice melted, covering most of the planet’s surface in water. Also, a cosmic event in the Zali star system caused a non-stop torrential downpour on Aperokea for centuries. This forced the dominant species called Aperokeans – a humanoid race – to expand their existing subterranean technologies and communities, to help their species survive. Ultimately, they were able to do this, and the Aperokeans grew into the dominant water race of the galaxy.

Blacious Lito possesses advanced strength, speed, durability and agility. He can breathe underwater, and he also has hand-to-hand and weapons combat skills. He carries a pair of GKF blasters.

Even though the planet is mostly underwater, it is home to thousands of different species of creatures, ranging from bacteria to the Aperokeans. The deep, vast seas on Aperokea were deadly, being home to a plethora of monsters and creatures. Thus, the Aperokeans needed to use their technology and anatomical advances to defend their cities. This led to them developing a force of highly skilled warriors who patrol the waters, and defend travelers and community exteriors from the beasts. They were called Neroldiers, and Blacious Lito was one of the most famous.

From very early on in his life, it was evident that Blacious was one with the water. He took to swimming better than any of his peers, and the things he could do with his body were incredible. He also had an aptitude for combat, and when he came of age, he was already better than most other Neroldiers at performing their duties. As such, his elders wanted to make him a commander. However, Blacious was also wild and unpredictable. He would often break ranks and go off on his own to hunt down bigger and more dangerous beasts. Yes, he would always emerge successful, and his victories definitely added to his legend. Nevertheless, he was unreliable and could not be entrusted with leading a group of Neroldiers. Alas, after many years of working to defend the underwater cities of Aperokea, Blacious grew weary of being a mere member of a team, and sought to find new adventures. It was on the eve of his planned defection, though, that he met someone who would change his life forever. That man was General Tixus Trexion.

The Galaxias Kyklos Force had established a safe haven for galactic refugees and people of importance on Aperokea thousands of years ago, after Aperokea became a “sub-shadow class one” member of the Unity – the collective of planets in the Sympan Treaty of Galaxies (STG). Being sub-shadow class one meant that very few outside of the STG, GKF and Aperokea knew of the planet’s existence and inhabitants, similar to Nederia. It was the perfect place for such facilities, with it being solely underwater, making it highly difficult to access, heavily defended by GKF and Aperokean military, as well as the fact that most species across the galaxy had not adapted to underwater environments like the Aperokeans did. Thus, when the GKF heard Emperor Kako of the Tromokratesian Empire was in the galaxy seeking to make a weapon of mass destruction, Tixus figured that a good way to stop him was to find out what he was looking for, obtain it first, and then take it to Aperokea to be held in a GKF vault, deep under the surface of the Aperokean waters, guarded by legions of GKF and Aperokean forces.

While Tixus was on Aperokea visiting, he ended up running into Blacious randomly while walking through a Neroldier complex. Once the two bumped into each other, Blacious turned and told Tixus to watch where he was walking, without realizing whom he was yelling at. The young Aperokean was consumed by his plans to run away, and was not paying attention to anything around him. That was when a Neroldier leader scolded Blacious for his tone and immediately demanded he apologize to the GKF general. Then, when Blacious looked up and saw the man he barked at was indeed Tixus, he apologized profusely. Though the young Aperokean was brash and a wild card, he had the utmost respect for the GKF general. He loved the story of Tixus ignoring the rules and boarding the GKF ship when he was 16 to return to his home planet and face the Tromokratesians, despite being told he was too young and not authorized to fight. Blacious would often imagine himself as Tixus while he swam off, abandoning his group during duty, to chase down a giant monster that was evading the Neroldiers. It was at that moment, too, that Tixus saw something special in Blacious. The young Aperokean had fire and a unique aura about him. So, the GKF general said he was going to look in on Blacious the next day when he was free, to talk to him about joining the GKF. The young Aperokean was astounded, and told Tixus he wanted more than anything to join up. Therefore, the next day after the two talked, Blacious set off to GKF training at a nearby facility a few planets away.

It took a while for Blacious to become accustomed to the rigid and disciplined structure of the GKF, and there were a few instances when his free spirit saw him get in trouble with his superiors. He also did not gain much favor with his fellow cadets, as every time Blacious broke ranks to do his own thing during battle simulations, it meant some of his fellow teammates would get killed and the team would lose. Ultimately though, after learning he needed to become a part of the collective, as opposed to going at it alone in order to survive in the galaxy as a warrior, Blacious adapted the GKF teachings and fell into the fold. This saw him advance through the ranks, before eventually becoming the youngest Major in GKF history.

After obtaining his new rank, he went to work in General Tixus’s division. He would often be involved in missions, as well as help organize intelligence meetings for GKF leadership. Tixus was grooming him to become a leader in the organization. It was because of this that the general had Blacious greet lieutenant generals Gryxus Raxium, Creexus Ioia and Nexus Catalyxia upon their arrival on the general’s starship, for he had summoned them for a special mission within their current larger mission, to help defend Earth from Emperor Kako.

Blacious brought them to a private conference room, and fully briefed them on the situation that was taking place on Earth. He informed the three that there was a Tromokratesian contingency on the planet already, and they had excavated the last of the triplos asteri. Then General Tixus walked in and thanked the three lieutenant generals for accepting his invitation. Blacious continued to bring everyone up to speed, displaying all of the intel they had collected so far on the matter. Then, Tixus told them it was time to call in to the Leadership. Gryxus, Creexus and Nexus were taken aback, as very, very few people in the entire galaxy ever got to see the Leadership, let alone talk to them…