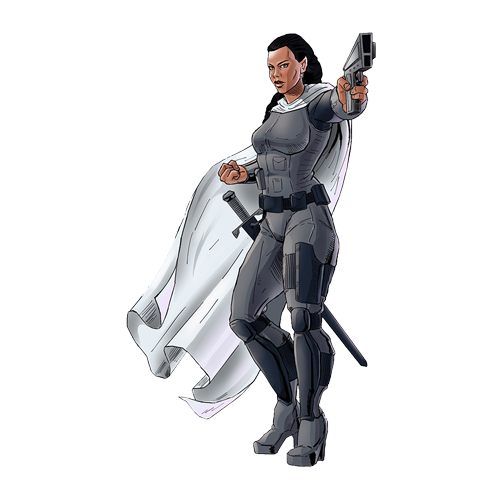 Zena Dragil was born in the early 20th century to two farmers on the planet of Spiti in the Igetis System. She hailed from the same place as General Tixus Trexion. So, when he promoted decorated soldier Gryxus Raxium to the position of Lieutenant General and gave him control of a number of Galaxias Kyklos Force units, he also recommended that Gryxus take Zena under his wing. He was familiar with her track record and abilities through his connections with the junior military academies on Spiti, and Tixus foresaw Zena being able to rise through the ranks if she had a strong, combat-tested superior to work under. Thus, the general thought Gryxus was a perfect fit. The lieutenant general gladly accepted Zena, as Tixus’s recommendation carried enormous weight with him, and Zena joined Gryxus’s ranks.

Zena possesses advanced strength, speed, agility, endurance and durability. She is trained in hand-to-hand and weapons combat. Her weapons include a GKF sword, and a pair of GKF blaster pistols.

For many years, Zena excelled in all of the military intelligence, strategic aptitude and intergalactic war history courses. She was as knowledgeable as anyone when it came to planning a battle, managing a siege or defensive stand, and overall militia management. However, when it came to fighting and combat, Zena was not so proficient. She was not as strong as most other GKF members, and her combat abilities were unpolished. Thus, when it came time to exit the classroom, battle simulations and war rooms, she was put through the ringer by her peers.

Zena was tossed around like a rag doll. She was punched, kicked and smacked around with the practice weapons regularly. Yet, that was why General Tixus wanted her under Gryxus. He knew if anyone could show Zena how to use her skills to her advantage against stronger and faster opponents, it was the man who took down Tromokratesians by the hundreds on his own planet, before leading a full-fledged revolution as a young man.

Noticing Zena’s struggles with combat, Gryxus began training her in solo sessions, in addition to her participation in routine training. He advised her on how to use her strengths to her advantage, and when she was outmatched, to use her intelligence to achieve victory. She was fast, quick, and she was much smarter on tactics and strategy than most of her peers. Thus, their sessions focused on those things. Instead of taking opponents head-on, Gryxus helped her hone a style of fighting that utilized her hand and foot speed, along with attacking at angles which she could switch on the fly using her quickness. She also adopted many of Gryxus’s techniques to target weak points and exploit others’ strengths against them. She mastered attacking knees, eyes and necks, learning how to quickly immobilize, blind and kill her enemies. Also, if she were going up against someone bigger than her, she learned how to get in and out of range quickly. If they were stronger, Zena learned how to use her speed to tire them out and force them to over-commit, so she could capitalize on striking windows. Many years went by, but eventually Zena became a formidable hand-to-hand and weapons combatant.

After she obtained the skills to fight, she developed into a very well-rounded Galaxias Kyklos Force soldier, and began rising through the ranks. First, she was a very successful team leader in one of Gryxus’s units. Her team had a perfect mission completion record, and they were often called upon to help supplement the efforts of less talented teams while going into battle. Then, Zena was appointed control of a few teams. Eventually, through much success, and not having had even one troop die under her command through dozens of missions, Zena was promoted to the rank of Major. She had proven herself an indispensable member of the GKF, and Gryxus wanted her to be his right hand.

All of these memories flooded Zena’s mind, as she stood there and learned all the details of Gryxus’s life that she never knew. Of course, she had heard the tales of the Spirit of Siopi, but she did not know about all the pain and suffering behind it. It was nowhere near as glorious as the triumphant tales spread by the masses made it appear. As such, she came to realize that Gryxus going down to Earth to confront Tromokratesian troops, and maybe even Emperor Kako himself, meant the level of emotional connection the lieutenant general had to the mission was heightened way above any other threat they had faced. And his agitateddemeanor, combined with a visible anxiousness, made her worry. Zena had never seen Gryxus like that before. He was always cool, calm and collected.

She walked up to Gryxus as he finished up his preparations, and stopped him. With her hand on his face, she looked him in his eyes and told him to calm down. It was the first time the student had to school the teacher, but it worked. Gryxus realized he was not himself, and her words brought him back to center. Once calmed, he thanked her and they hugged tightly. Zena told her teacher and mentor to make sure he brought himself back. Gryxus replied that he would, and he then said to Zena he had the greatest confidence that she would lead their troops to victory on Earth during battle. Then, Gryxus left for the transport ship to join General Tixus.