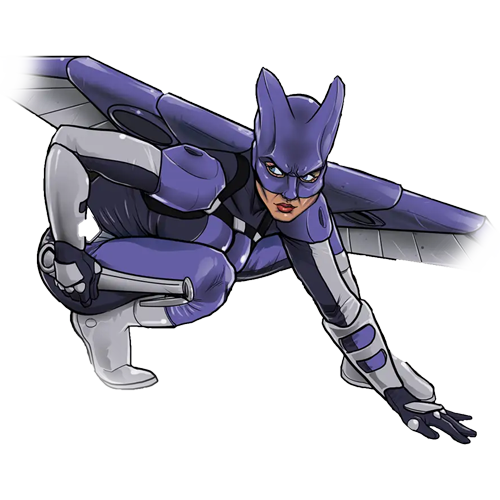 Keisha Pine had always been a gearhead. While some girls played with Barbie Dolls, little Keisha propped her Barbie’s ‘Vette up on a makeshift lift and pretended to check the suspension while devising a plan to maximize the efficiency of the engine so America’s favorite career-switching princess could blow through the competition at the Super Bowl of Stock Car racing. She parlayed that love for automotive engineering into a passion for mechanical engineering and after graduating from prestigious Stuyvesant High School in lower Manhattan, she enrolled in Rensselaer Polytechnic Institute in upstate New York where she quickly earned the respect of her professors and peers. While she loved RPI, she found the focus of the institution to be a little narrow for her taste. After her second year, she transferred to Platinum City University and immediately diversified her fields of interests.

Night Bird has no super powers, but her modified gear gives her enhanced speed, enhanced strength and limited flight capabilities. Her costume is outfitted with cybernetic components and a number of utilties she can use as tools and weapons. Night Bird is also extremely intelligent and has a background in mechanical engineering. She is an expert with cars and other vehicles and she’s one of the best stunt drivers in the world.

Just like that symbol of American feminism she played with as a child, Keisha wanted to explore every possible career path. She took classes in philosophy, creative writing, geography, astronomy, biology, dance, West African literature, finance, criminal justice, sociology, world religions and more. For the next three years, she soaked up an unimaginable variety of knowledge! Then, in what was supposed to be her second to last semester at PCU, she stumbled upon a Civil Liberties class and for the first time she discovered a field of study that she loved just as much as engineering: Law. She switched to a new major.

Keisha determined that she could continue to work on cars on the side while pursuing a Pre-Law degree. Two years later she graduated from PCU’s Law Program and began working her way up the ranks of the Cobalt Law Group in Platinum City. Her ridiculous breadth of knowledge in so many different areas gave her a leg up on her peers and it wasn’t long before she earned a reputation as the top defense attorney in the firm. Other firms began recruiting her and she literally had her pick of where she would work. But one firm caught her eye. It wasn’t a wealthy firm. In wasn’t a very big firm. In fact, it only had one partner at that point. His name was Kwame Archer. He offered her a contract with Archer and Associates. She joined without hesitation.

It took a little while, but eventually the two of them learned to push their considerable egos aside and work together for the greater good. And then Keisha discovered Kwame’s little secret – that he was the Platinum City Superhero known as Black Jag! She was surprised, but she was not impressed. She criticized his gear, calling it “old school” and “janky,” and ridiculed him for being a Black Panther rip-off. Whenever he drank the last bit of coffee in the office breakroom without refilling it, she would jokingly threaten to reveal his identity to clients and district attorneys. She especially got a kick out of calling him “Black Kitty” and “Lion Prince.” But finally, after giving him a couple of months of grief, she decided to help him. She began enhancing his gear and designing new tech for him. She created the energy sticks that became his primary weapons and retrofitted a secret compartment within his apartment to work as a base of operations, which she affectionately called the “Kitty Cave.” Despite the ribbing, she ended up making Black Jag so much better than he was. And of course, she constantly reminded him of that.
Her two greatest contributions to Kwame’s crime fighting adventures were, however, the tricked-out 2099 Sports Cadillac, Racing Edition, with more gadgets than a 007 ride, and her own services as a crime fighting partner. She built a costume, donned the mask and rechristened herself the “Night Bird.”

Kwame quickly tried to tease her about being a “discount Batwoman.” Keisha laughed it off, then challenged him to put on his gear and engage her in a friendly superhero sparring match. He gladly accepted and the two of them went at it. It was an even fight at first, but once Keisha revealed her secret weapon, the ability to sprout nitrous-boosted wings and fly, the fight ceased to be an even match. Kwame never called her a discount anything ever again.

After a couple of years of working as a team, both in the courtroom and in the streets, Kwame and Keisha were faced with their greatest challenge. It had been 100 years since the great Earthquake of 2016 literally split the country in half and The Mayor of Platinum City, Gemini DeLisi, was set to give a speech that would address the lack of unity the United States had experienced since then. With Platinum City’s status as the City of the Present and the Future, its Mayor was afforded a very influential platform. But before he could utter his first declarative word, chaos erupted as hundreds of reports of bank robberies across Platinum City poured in over the wire. The police force was immediately overwhelmed by the mayhem and so Black Jag and Night Bird sprang into action.

Kwame jumped in the Caddy and Night Bird took to the skies. She spotted robbers, relayed the info to Jag and together they apprehended dozens of criminals. But there were dozens more! Small crews of petty thieves ran into banks with reckless abandon, smashing into vaults, grabbing bagfuls of cash and jewels and jumping into getaway cars. When confronted by police cruisers, the robbers simply opened fire or attempted to drive them off the road. Jag’s Caddy, of course wasn’t having any of that. Keisha had fitted it with the type of armor you’d need a tank to break through.

One team of criminals just so happened to have a tank! Night Bird spotted it from the sky, and dove in to intercept. She landed on top of the tank and used the laser cutters on her wrists to penetrate the tank’s armor. The vehicle came to an abrupt stop forcing the heroine to disengage. She flew off the tank and landed right in front of it. The hero and the tank stared each other down for a long moment. Then the top hatch popped open and Keisha was surprised AND impressed to see a woman rise from the cockpit. It was the supervillain, Hysteria…