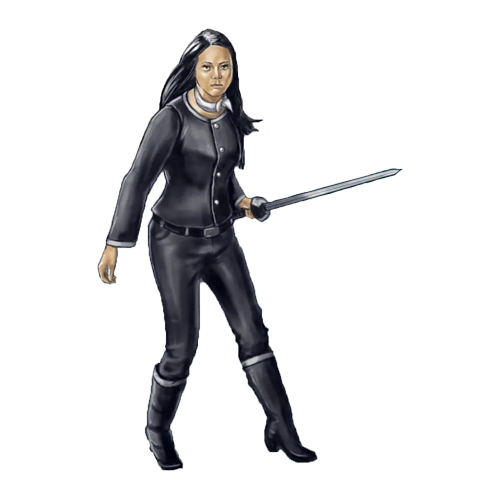 When your occupation title is “assassin”, you know you have a somewhat dirty and unscrupulous job. Even if your targets are ghastly paranormal beings known as ghost orphans. Nirmala belongs to a large sect of noble hunters and assassin called the Veil, and they’ve been tracking and hunting down human beings, who have ghost orphans living inside of them.

Over the centuries, the majority of ghost orphans have taken on somewhat malevolent personas and lifestyles, and so when Veil hunters go after them, there is a very clear “good versus evil” dynamic , which leaves very little to interpretation when it comes to the morality of the situation. After all, in order to catch a ghost orphan and release it into the afterlife, the human host must be killed.

Nirmala was born from one of the seven bloodlines of the Veil, which means she is specially equipped to hunt mysterious lost souls known as ghost orphans. She carries a weapon called a living-blade, which is infused with her blood. She is an expert swordswoman, and is trained in a number of fighting techniques.

Killing bad guys is easy on the conscience. Killing good people, however, – even if they are possessed by ghost orphans – can sometimes be a struggle for even the most seasoned and battle-hardened Veil hunters. The legendary Disa Philadelphia and her son and daughter, Peter and Valerie are examples of hunters who do not struggle with morality. However, even they are not as cold-hearted and seemingly unfeeling as Nirmala Sardis.

Nirmala earned quite a bit of notoriety throughout the ranks of the Veil, when she discovered that the president of her native country, Indonesia, was a ghost orphan. Andreas Chandra had been in office for seven years, and at the time was considered one of the country’s most successful presidents of all time. He had spearheaded an incredible number of social, economical, and technological advances, and was beloved by the vast majority of his citizens and colleagues. He was, however, a ghost orphan, and despite suggestions from some of her fellow hunters that perhaps she should let him slide, at least until he was out of office, Nirmala was determined to bring him down as soon as possible. After all, she could not risk the possibility of the ghost orphan being caught by the reaper Alva Devine.

On a blistering summer night, she infiltrated the presidential complex, sliced through the presidential police teams, bypassed the security systems and slew President Chandra, releasing the ghost orphan into a heavenly afterlife. She was forced to go into hiding after that, for she was wanted by the Indonesian authorities. For the rest of her years she became pretty nomadic, staying on the move, while continuing to hunt and capture the ghost orphans that other members of the Veil sometimes conveniently overlooked.

She didn’t much visit Platinum City, where the majority of Veil hunters were based out of; but when she received a call from Disa Philadelphia, requesting her immediate presence, she knew something was wrong. Disa was not known for calling for help; usually, she was the one getting called.

When Nirmala arrived in Disa’s Platinum City apartment, the situation was even more dire than she suspected. A young hunter, Quintonice Philadelphia, who had been a student at Platinum City University, had been arrested and charged with inciting a riot and, consequently, murder. A series of circumstances, including an ominous prophecy given to the hunters, a group of thousands of ghost orphans marching around the Central Administration Complex of Platinum City University, and a campus-wide party, celebrating an NCAA national football championship, had managed to collide in a perfect storm, which led to the deadly riot at PCU, and Quintonice – in an effort to defend students from a group of ghost orphans who’d begun unleashing their paranormal powers – had brandished her living-blade and began cutting the lost souls down.

After the dust had cleared and order had been restored, Quintonice found herself arrested, sitting in a holding a cell. Within the next 12 hours she would be transferred to the Platinum City Supermax prison, and at that point there was no telling when any of the other Veil hunters would be able to make contact with the 20-year-old again.

The only choice was to break her out of the holding facility before she was moved. Disa was easily capable of pulling off such a task, however, her status as a public figure, and the fact that collateral damage was a possibility (i.e. the mission could result in the casualties of law enforcement officials), meant she could not go through with it herself. After hearing the details of the situation, Nirmala was more than happy to do it.

With three hours left before Quintonice was to be transferred, the elder huntress infiltrated the Platinum City holding facility, and attacked the officers who were guarding the her. The officers were skilled and accurate with their weapons, but eventually Nirmala was able to take them down without causing any permanent damage. She broke into Quintonice’s cell, and told her it was time to go. The young girl hesitated for a moment, then joined her kinswoman.

The escape was on – several more officers engaged the hunters, but Nirmala took them all down. Finally, she was confronted by the top Platinum City officer; the man known as Ox. Ox was a hyper-being, with the ability to spit sharp projectiles from his mouth. Nirmala brandished her blade, and the fight was on! They clashed in an epic showdown that tore through the facility. A number of other officers tried to jump in, but Nirmala cut them down immediately, in order to keep it a one-on-one battle.

After a number of close calls, Nirmala found her opening and sliced through Ox’s leg, disabling him, and giving her and Quintonice a chance to escape. Nirmala had a car waiting for them, so they jumped in and began driving. Quintonice was relieved, exhilarated, and scared out of her mind! She had so many questions, but Nirmala told her she was not there to answer questions, just to get her out of the city.

Quin was surprised to hear that. She asked: what about college; what about finishing her degree at Platinum City University? The seasoned hunter told her that Platinum City was no longer her home, and that she could not return any time in the foreseeable future. Nirmala was going to take her to a safe place where she could be reunited with her mother, and then they would make a plan from there.

Just then, Nirmala pulled out a cell phone and dialed a number. After a second of waiting for someone to answer, she simply uttered the words “it’s done,” then hung up the phone, and kept driving.