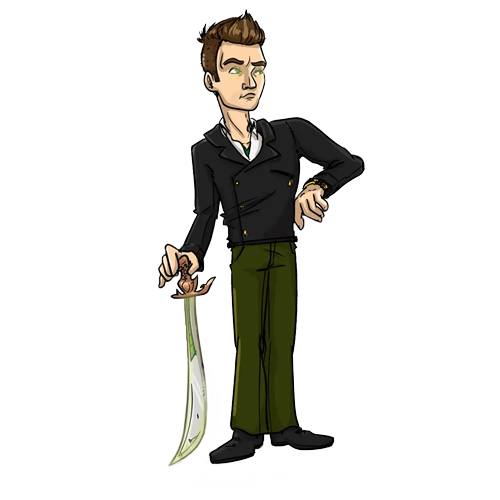 Terrance Smyrna was on the verge of graduating from Platinum City University near the top of his class, with a major in computer science. He was a bit of a gamer, and a little too much of a ladies’ man. He played for the school’s lacrosse team, and enjoyed a good run on the student council. He was also a descendant of a the secret sect of noble assassins known as The Veil, whose purpose was to hunt down lost souls called ghost orphans and send them to heaven.

Terrance Smyrna is a Veil hunter, which means he is specially equipped to hunt ghost orphans. He is a master swordsman, and is trained in a number of fighting techniques. His primary weapon is a special type of sword called a living-blade.

Unbeknownst to the general student body, almost all children born from one of the seven Veil bloodlines attended Platinum City University as part of their upbringing. And between their studies and other activities, the Veil students would go to the mysterious Deep Wing of the school, and rigorously train in a variety of sword techniques, as their primary weapon in hunting down ghost orphans was the powerful living-blade.

Terrance was in the middle of his second-to-last semester, when thousands of ghost-orphan-possessed humans began silently marching around the Central Administration Complex of PCU. It had been a student by the name of Derek Loman who had walked into a classroom and declared to legendary Veil huntress Disa Philadelphia, that after seven weeks of marching, the walls of Platinum City University would fall, and that event would signify the beginning of the end for the Veil as a whole.

The Veil hunters had argued over what to do about the marchers. There was no way to tell if this prophecy was true or not, and because the general population had no idea what a ghost orphan was, it would be unwise to simply attack the marchers and begin slaying the lost souls inside of them. However, that was exactly what happened during the fourth week of the march.

Recent PCU Veil graduate (and campus security guard) Mio Sardis had contacted Terrance, and all of the other Veil students, and informed them to be on guard on this particular night, because the Platinum City University Quakes football team was expected to win the National Championship game, and the student body was expected to celebrate in potentially raucous ways.

Raucous was an understatement!

Terrance was hanging out with fellow Veil student Quintonice Philadelphia, watching the post-game coverage, when they got an alert from Mio that she needed backup near the Central Administration Complex. The hundreds of celebratory students, most of whom were drunk, were making their way toward the silent marchers, and a clash was inevitable. Terrance and Quintonice arrived just as a fight broke out between a wasted frat boy named Tye and one of the marchers.

But this was not just an ordinary fight. Because the marcher was a ghost orphan, he ended up unleashing a plethora of paranormal abilities, including enhanced strength and speed, and ghostly energy blasts! A number of other marchers did the same, and the partiers witnessed an incredible display of paranormal phenomena. The party had transformed into a brawl, and the brawl quickly became a riot; and the ghost orphans were wreaking absolute havoc. Mio ordered Terrance, Quintonice and the other Veil students and security guards present to grab their living-blades, and cut down the ghost orphans! Terrance brandished his blade and charged into the fray. He took down four or five ghost orphans, before coming across a familiar face. It was a girl he had briefly dated during his freshman year at PCU – Patsy Briano. She was beautiful. She was also a ghost orphan! He hesitated, and Patsy saw her opening! She unleashed a blast of ghostly energy at him. Luckily, Quintonice leaped and tackled him to the ground, saving his life.

She then turned and engaged Patsy. Terrance watched as the two of them clashed! Eventually, Quin gained the upper hand and slew the possessed student, relinquishing the lost soul inside to finally find its way to heaven. The young huntress barely had time to breathe, as a dozen more ghost orphans rushed her. Terrance gathered himself, and was preparing to call for help, when suddenly the sound of gunshots rang through the air!

People screamed, and the force of the stampede intensified. Terrance next heard the sound of a living-blade clank against the ground. He looked toward the echo to see Mio Sardis slumped on the ground – she’s been shot! Quintonice continued to slay ghost orphans, as Terrance ran over to the fallen Veil huntress. She was a bloody mess, barely conscious. He didn’t know what to do, so he just covered her, to try and protect her from the madness around them.

Moments later the Platinum City Police Force showed up in full force. They immediately began to regain control of the situation. Captain Ox and Lieutenant Sergeant Brolic, who were not only the top cops in the city, but also both had hyper-abilities, led the way. Barricades were raised, fights were broken up, ghost orphans tuned their powers down, and a number of people were arrested – including Quintonice!

All of the other Veil kids were able to slip away before being spotted or apprehended; and Terrance, thinking fast, kicked his and Mio’s living-blades into a nearby sewer drain. Moments later, a trio of police officers arrived and trained their weapons on him. He screamed that he needed help for his wounded friend. A number of emergency personnel swarmed onto the scene. Mio was placed in an ambulance, and Terrance was placed in handcuffs.

Terrance was taken to a holding facility, where he sat alone for hours. Finally, Disa Philadelphia was let in to talk to him. He began to tell her about all of the madness of the night, but she already knew everything. She knew there had been a riot, and that several of the marchers had displayed their ghost orphan powers. She knew that a number of Veil kids were forced to use their living-blades, but had managed to escape to the Deep Wing. She knew Quintonice had been arrested as well, and she knew that Mio had been shot.

The good news was that Mio’s healing ability had saved her life, and she was already out of the hospital; furthermore, Terrance was going to be released from the holding facility, for it had been determined that any violent action he took was in self defense. There was, however, quite a bit of bad news: there were a number of lifeless bodies found on PCU’s campus, and someone had to be held responsible. It was made even more complicated by the fact that hundreds of people had witnessed an array of incredible paranormal activity that could not be easily explained. Additionally, since Quintonice was the only one holding a sword when the police arrived, she was being investigated as the primary suspect for inciting the riot.

Terrance couldn’t believe what he was hearing. Disa promised she and the other elder hunters would do everything in their power to help Quin, and told him not to worry, but instead get back to the Deep Wing of PCU, and rest among the other Veil students.

The young man did what he was told, and though he was immediately comforted by his fellow hunters, he felt no comfort at all.