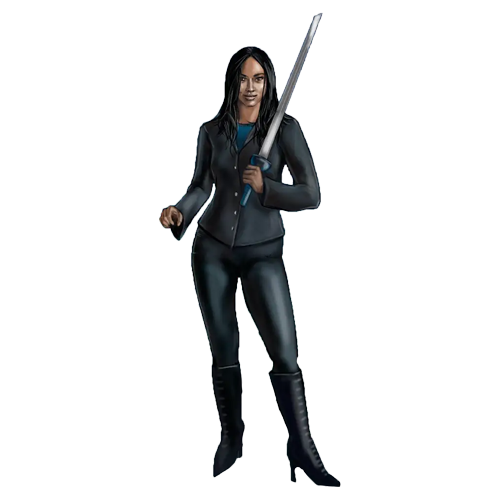 Reagan Smyrna is a descendant of the seven Veil family bloodlines, which means she possesses the unique ability to hunt down and capture, ghost orphans. Ghost orphans are lost souls that have been wandering the Earth for over a thousand years. For a long time the orphans existed as ghastly wraiths, but sometime in the 12th century they discovered a way to phantom-fuse with the bodies and spirits of human beings, making them exponentially harder to track and identify.

Only specialized weapons called living-blades, which are wielded exclusively by Veil hunters, can give ghost orphans passage to a heavenly afterlife. Most orphans, however, have no desire to relinquish their earthly immortality, and often do everything in their power not to be found. Furthermore, a number of ghost orphans, led by Virginia Ice, have formed a militia to fight back against The Veil. To that end, many hunters have been killed, and two of the seven bloodlines have actually been wiped out.

Reagan was born from one of the seven bloodlines of the Veil, which means she is specially equipped to hunt mysterious lost souls known as ghost orphans. She carries a weapon called a living-blade that is infused with her blood. She is an expert swordswoman and is trained in a number of fighting techniques.

The history of the ghost hunters, The Veil, and a third group of warriors called reapers, is rich with intricate detail, and Reagan Smyrna knows it all. From the time she was a little girl she took a liking to studying timelines, cultures and lineages. By the time she was a teenager she had mapped out and documented nearly the entire extended family trees of the seven bloodlines. She had learned that by the turn of the 22nd century more than 1500 hunters had spent their lives fulfilling the call of the Veil and more than 200,000 orphans had been caught and sent to heaven. She also learned, however, that nearly the same amount of ghost orphans had been caught by reapers, and thus sent to a darker afterlife.

By the time she enrolled in Platinum City University, she already knew more about the history of the world than many of her professors, as her study of Veil mythology organically led her to study humanity in general. But her greatest love was the study of world religions. Generally speaking, it was necessary for most hunters to subscribe to a somewhat fundamental sect of Christianity, as much of the Veil’s history and mission lined up with traditional Judeo-Christian biblical text. Reagan, however, found interest in a number of belief systems, and made an effort to study as many of them as possible.

Most Veil children attended Platinum City University, but only some actually took jobs at the school upon graduating. Reagan immediately became a teacher’s aid, and within a few years had moved up the ranks and earned a position as a full-time professor in the Religious Studies department. She would work as a combat trainer in the Deep Wing of the school (where the Veil had been allowed by the school’s president to set up a base of operations), and would join her fellow hunters on missions to catch ghost orphans from time to time, but her true love was teaching and lecturing.

After some time she became romantically involved with the world’s top Veil hunter, Peter Philadelphia, and the two of them got married. Reagan continued to teach, while Peter’s supreme talent and tactical skill eventually elevated him into the position to replace his mother, Disa Philadelphia, as the leader of the Seven Families.

Reagan and Peter rarely went on missions together, however, when thousands of ghost-orphans showed up on Platinum City University’s campus, and began silently marching around the Central Administration Complex, Reagan thought it might be time to pick up her blade again. A young ghost orphan named Derek Loman had come and informed the hunters that after seven weeks of marching, the ghost orphans would watch the walls of PCU crumble, and consequently, the ranks of the Veil would be broken. He also told them that Virginia Ice had returned to Platinum City and was a key player in the ominous prophecy.

Peter and Reagan, along with Disa, set out to find Virginia Ice, but she had set a trap and the hunters were ambushed. They were able to battle through the couple of dozen ghost orphans that attacked them, but the biggest blow was dealt during a one-on-one confrontation between Reagan and Virginia.

As the women crossed blades, Virginia informed Reagan that she and Peter had been sort of romantically involved many years prior. This, of course, shook the huntress to her core. The vengeful vixen was sure to promise the huntress that nothing physical had happened; but she also told her that the emotional connection at the time was strong, and further suggested that feelings may still linger.

Peter, Disa and Reagan soon regrouped and overwhelmed the devious ghost orphan. Virginia, however, had formed a dark alliance with a group of reapers, led by the queen hellspawn herself, Alva Devine. The Veil hunters were caught off guard, as traditionally a reaper’s sole purpose on Earth was to hunt down ghost orphans and send them to hell. Reagan, her husband and her mother-in-law were forced to retreat.

After spending some time at their base of operations in Platinum City University to debrief as a group, Peter and Reagan returned to their apartment to debrief as a married couple. Reagan immediately confronted Peter about what Virginia had said, and Peter was compelled to be as truthful with her as possible.

An intense argument ensued! Reagan was disappointed that her husband had not revealed this part of his past to her; but she was enraged that Peter, a Veil hunter from the most noble of all the seven bloodlines, could have ever entertained a romantic relationship with a ghost orphan. Not only were they mortal enemies, but the idea of a human entering a relationship with an entity that was merely using another human being’s body and soul as a shell, was just unfathomable to her.

Peter reminded her that most of the world is unaware of the existence of ghost orphans, which meant there are plenty of people unknowingly involved in all kinds of relationships with ghost orphans. Reagan conceded that point, however, her rage did not subside, as she reminded Peter that he is not one of those “unknowing people,” and thus should have known better. They argued deep into the night, and around 3 AM Reagan picked up her living-blade…

Peter instinctively looked toward his own weapon, but did not reach for it. He instead slowly stepped back, away from his blade, and waited. After a very long, very tense moment, Reagan turned, and left the apartment.

She traveled to an underground slum beneath Platinum City called The Gap – a place where hundreds of ghost orphans live in relative peace; and a place where hunters and reapers rarely travel to. Well, except for Peter’s sister, Valerie Philadelphia, who had actually taken up residence in The Gap, and spent much of her time secretly picking off ghost orphans one by one. When Reagan showed up at Valerie’s door, the latter had donned her shroud and was preparing to go put her living-blade to use.

Reagan did not tell Valerie what she had learned from Virginia Ice, nor did she tell her sister-in-law that she and her husband had been arguing for most of the night. She simply wanted to take a walk… through The Gap… without her blade. Valerie vehemently protested this course of action, but Reagan insisted.

And so Valerie removed her shroud, the two of them placed their living-blades on the floor, and they walked out into the streets of The Gap. The ghost orphans immediately recognized them, and began to hiss and curse at the two women. Some even threw things at them. Valerie wanted to yell back at them, but Reagan stopped her, and instead encouraged her to simply keep walking.

At first, just a couple of orphans followed them. But after a few moments, the ladies realized the crowd had grown to more than a hundred strong. Some of them had weapons; others continued to scream and curse; and still others just silently watched.

Suddenly, Reagan felt some fingers brush against her right hand. She stopped in her tracks and asked who had touched her. Valerie quickly reminded her that they were surrounded by hundreds of people – ghost orphans to be exact – and that it could have been anybody. But Reagan insisted that someone had deliberately touched her hand. After a few seconds, a little girl, no older than 10 years old, raised her hand.

Reagan went over to her and got down on her knees. Valerie and the ghost orphans watched intently as the two of them began to converse. Reagan learned that the girl’s name was Elpida, and that the lost soul living inside of her was that of a young girl as well, for the initial 4th-century war, that had claimed the lives of the humans who would become ghost orphans, had swept through her Greek city before she had even reached adolescence.

Reagan had never encountered such a young ghost orphan, and it broke her heart that this precious little soul had been wandering the Earth for thousands of years. As tears streamed down the huntress’s eyes, Elpida leaned in and hugged her. Reagan was startled at first, but soon found comfort in the embrace.

After a few more moments, Valerie finally put a hand on her sister-in-law’s shoulder and told her it was time to go. Reagan squeezed the little girl one last time, before getting back to her feet. As they turned to leave, the crowd of ghost orphans made a path for them. No one screamed. No one cursed. In fact, no one said anything.

The next morning, Reagan returned to her apartment. Peter was waiting for her. They spoke again, and came to an understanding: regardless of what happened, they would not let Virginia Ice break them. With that said, they picked up their living-blades, and began training for the next hunt.